Founded in 1999, Aircel is an Indian telecommunication enterprise providing people and institution with access to 2G, 3G and 4G networks. The headquarters of Aircel are located in Chennai, Tamil Nadu.

Aircel has also been merged into Reliance Communication in order to provide people with better data and voice call services though Aircel continues to run its processes independently as well. Maxis Communication leads the enterprise with 74% of stock and shares while the rest 26% are owned Sindya Securities and Investments.

Aircel has proved its mettle in North-East Region along with bit of south regions; some of the states where its presence can be felt strongly are:

Product in the marketing mix of Aircel

Reaching out to the vast Indian audience requires specialized skills or services that impress everyone. While Aircel is yet to pan across India, it has surely made a place for itself in the lives of people from Northeast and Southern regions of the country. While the company constantly looks forward to expand and make a dent in the world, improving services side by side is just another thing they prefer to concentrate on.

Aircel aims to go pan India but they are taking it slow because of the lack of orders from the contemporary government. The company has aims for delivering quality services in the remotest corners of the company. The world can be relaxed and look forward to something amazing coming out from the house of Aircel.

Place in the marketing mix of Aircel

Aircel has a strategy that is working well for the company but the simple idea of taking it slow with expansion is going to harm the enterprise. Contemporaries like Reliance and Airtel are rushing to the remotest corners and are promising impeccable services at affordable price. The collaboration contemporaries are establishing are yet another challenge for Aircel. The digital allocation and distribution of resources is an extremely aspect of business development and from here Aircel seems to be losing on it.

While Aircel is busy making market presence, quality services offered to people are helping with word of mouth. Extremely cheap services are making people from Northern regions desperate about the launch of Aircel in their areas. Aircel needs to grab the opportunity by both hands and make a dent in the world.

Price in the marketing mix of Aircel

New to the world of 2G, 3G and 4G, Aircel aims to establish itself first hence they are quite lenient with rates. The free calling services and exceptionally good data services at affordable rate is helping enterprise climb ladders faster than anyone else. Like any other telecom provider, Aircel is trying to establish itself in the market with a Penetration pricing strategy.

Aircel promises 1 GB of 3G/4G data at an unbelievable price of 150 INR in varied regions of the country. There’s a lot more to come from the house of Aircel. People using Aircel connection are quite satisfied with the service and pricing; they are not going to anywhere in near future. All Aircel needs to expand at a faster pace and introduce the whole of India to an amazing service at affordable price.

Promotion in the marketing mix of Aircel 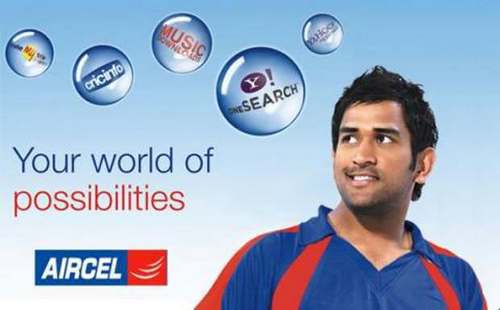 Aircel is not only winning with brand awareness but they have also showcased their concern towards the degrading health of our planet and have offered help in preserving tigers and making this world a better place for them.

Mahendra Singh Dhoni, the Captain of Indian Cricket Team has also served the brand as brand ambassador and is bound to resume as soon as the ban from CSK is lifted.

Aircel is moving in the right direction with all the establishment and campaign; all they need to do is increase their pace and change the people use voice call and data services in India.