Singapore Airlines is associated with the airline industry and is the flag-carrier of its country. It is majority-owned by its government and by Temasek Holdings. The company was founded as Malayan Airways in the year 1947 and commenced operations as Singapore Airlines in the year 1972 1st October. It operates with help of several airlines-related subsidiaries and is allied with Star Alliance. Singapore Airlines was selected as the launch customer of largest passenger aircraft in world Airbus A380. It faces competition from following airlines-

Product in the Marketing Mix Of Singapore Airlines :

Singapore Airlines occupies the tenth position in terms of carrying international passengers. By the end of January 31st year 2017, it had a fleet of 111 aircraft including Boeing 777, Airbus A380, Airbus A350 and Airbus A330. Airlines offer a diversified range of in-flight and on-ground products and services that includes

Place in the Marketing Mix Of Singapore Airlines :

Singapore Airlines has its headquarters base at Airline House in Changi area located in Singapore and it operates from its hub at Singapore Changi Airport. It is a major carrier in North America, Europe and Pacific region and has extended its global presence to ninety cities in nearly forty countries including Dubai, Australia, Thailand, Bangkok, United States and the United Kingdom.

It has a widespread distribution network that includes services of its own website, affiliated portals and companies, tour operators and travel agents for booking tickets and offering related services. Singapore Airlines has a trained and capable workforce that includes 24,574 employees by the end of the financial year 2015-16 to help in speedy and efficient operations.

Price in the Marketing Mix Of Singapore Airlines :

At the end of the financial year 2015-16, estimated revenues of Singapore Airlines were 15.28 billion dollars and net income 804.4 million dollars. In global arena, it occupies one of the top fifteen positions in terms of revenue passenger kilometres and in the year 2010 was ranked at the second position in terms of market capitalization.

Singapore Airlines has targeted middle class, upper-middle class and corporate as its target customers who prefer reliability and comfort and for extra benefits are willing to shed additional bucks. It is a premium brand as it offers unparallel products and impeccable services to its esteemed customers. Singapore Airlines has adopted premium pricing policy as it is sure of customer loyalty.

Promotion in the Marketing Mix Of Singapore Airlines : 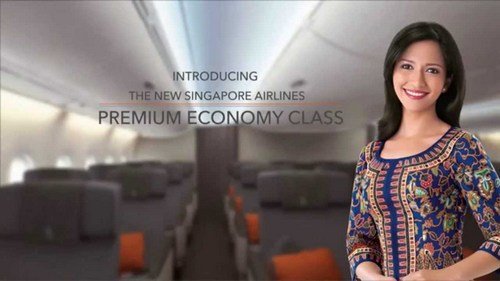 Singapore Airlines has launched Frequent Flyer program to reward its loyal customers by offering several incentives. A regular passenger can earn miles and get several benefits. The company has implemented both Pull and Push marketing strategy in order to garner a large customer base. It advertises with help of ad campaigns in electronic media like television and print media like brochure, banner and newspaper. Singapore Airlines has also taken help of social media platforms and advertisers via its own website and also associated portals along with platforms like Blogs, Facebook, Twitter and YouTube. It promotes direct dealings and stays in contact with frequent flyers by messaging and emailing offers and incentives at periodic intervals.