Kingfisher Airlines being a premium airline adopts a premium pricing strategy Kingfisher Red its low fare arm adopts a low fare pricing The pricing strategy aviation industry is highly dependent on the behaviour of the crude oil prices, dollar rates and competition. Fuel at present accounts for 45 per cent of an airline’s total operating cost. 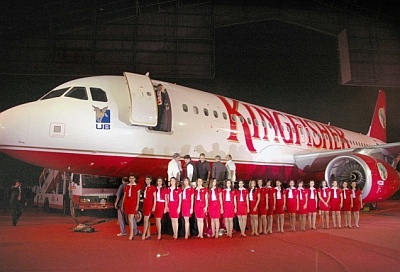 Kingfisher Airlines operates services to 80 destinations domestic as well as international. International operations started on 3 September 2008, with a flight from Bangalore to London. One of the reasons to acquire Air Deccan was to gain entry on to the international circuit, by gaining advantage on Air Deccan`s eligibility to fly international (as per DGCA rules) It also has plans to add several international destinations such as Bangkok, Hong Kong, Karachi, Kuala Lumpur, Lahore, Malé and Singapore in 2009

Kingfisher Airlines started its operations on May 9, 2005 with a fleet of 4 Airbus A320 aircrafts. Kingfisher Airlines was the first airline in India to operate with all new aircraft. On June 15 2005 Kingfisher Airlines became the first Indian airline to order the Airbus A380, to be delivered by 2014 Fleet size of 73 and 137 orders placed The planes have the best in-flight facilities that match world class standards

Being a service industry it has two types of customers: External Customers (Passengers) Internal Customers (Employees) Kingfisher Airlines uses the term “Guests” for its external customers. Dr Mallya tells his crew to treat every guest “In the same way as if they have visited his home.” In an airline, Cabin Crew play an important role because they are the ones who deliver the service and therefore they are termed as The Walking Billboards of an organization.