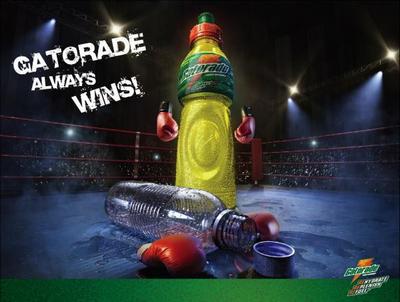 Gatorade deals exclusively with food items and beverages that relate to sports. This American brand is promoted around its signature ‘sports drinks’. Gatorade was introduced in the commercial market in the year 1965 by some researchers who belonged to the ‘University at Florida’. The intention behind this innovation was to refill the various components like carbohydrates, water and Electrolytes that a body loses as sweat during athletic competitions and vigorous trainings. This drink was originally marketed by Stokely-VanCamp and later was purchased by PepsiCo in the year 2001. According to the global retail sales, it comes at number four and its competitors in the world market are Lucozade Sport in England and PowerAde and Vitamin water of Coca-Cola brand.

Product in the Marketing Mix of Gatorade

During its initial years, Gatorade was available in both powder and liquid type with two distinctive flavors orange and lemon-lime. After twenty years, in 1983, the flavor ‘fruit punch’was introduced and in 1988, the flavor ‘Citrus Cooler’ was announced. The company also launched a chewing gum in the market called ‘Gator gum’ that was available in both the original flavors. The flavors were Watermelon in 1995, and Mandarina, Cherry Rush and Strawberry Kiwi in 1996. In the year 1997, ‘Gatorade Frost’,  a sub-line was launched with the intention of extending the appeal of the brand beyond the traditional lines. The flavors were Riptide Rush, Alpine Snow and Glacier Freeze.

The huge sales surpassed even the company’s expectations. In 2001, ‘Gatorade Energy Bar’ was revealed to the customers that were rich in proteins and carbohydrates. Later the company introduced special products as nutrition for sportsperson and it included Gatorade Protein Recovery Shake, Gatorade Carbohydrate Energy Drink, Gatorade Nutrition Bar and Gatorade Nutrition Shake. In2002, Gatorade ice with Watermelon, Orange, Lime and Strawberry came into the market. In 2007, ‘G2’ that was a low calorie drink came into market and is still available with flavors like Glacier Freeze, Rasp berry Melon, Blueberry-Pomegranate, Tropical blend, Lemon-line, Grape, Fruit Punch and Orange. In2008, a thirst quencher, ‘Gatorade Tiger’ was introducedin Cherry, grape and lemon-line flavors.

Place in the Marketing Mix of Gatorade

The distribution channel of the drinks is prevalent over eighty countries andthe market for the energizing drink includes countries like Canada, United Kingdom, USA and Australia. In USA, Gatorade holds at least three-fourth share in the category of sports drinks. Gatorade sports drinks are easily available in all the main super markets and malls. Special stores and outlets like the GNC have been established so that the branded drink is easily available to every interested athlete and customer. Gatorade drinks are also available by ordering them through postal services. College students and high school students can also buy this drinkthrough “Athletic Team dealers”.

Price in the Marketing Mix of Gatorade

The pricing policy of Gatorade at first was of premium policy but the company later changed it to competitive pricing policy after rival drinks started giving it strong competition in the market. The prices are decidedafter a thorough research. Analysts determine the cost of its own products, and then they conduct a market research about the consumer preferences and about the prices of the competitor’s products.  Prices are set up so that it does not become difficult for the consumers to pay for it. The price range of the products varies in accordance with the products that include powder or drinks. If the price is high, the volume will come down affecting the revenues so fair and logical pricing is very important.

Promotion in the Marketing Mix of Gatorade

Advertisement policy of the company is aired online and offline so that an awareness is created and maintained in the minds of the consumers. Online advertisements for Gatorade products are advertised on sports sites like NBA.com, Sports Zoneand the official website Gatorade.com. Online promotions are less expensive and are more popular with techno-savvy younger generation.

Advertisements related to Gatorade claimed that the body recovers faster after drinking the drink. Gatorade has become the official drink of NFL, NBA, USA basketball, US Soccer Federation, AFL and other athletic organizations.In 1988, after the advent of Citrus Cooler, Michael Jordan in early 1990s announced that it was his favorite drink and that was the day. The sales went up at an amazing rate. The company had signed a ten-year deal with the NBA superstar and the promotional strategy proved to be a blockbuster. Various sportsperson have been signed over the years for its promotional strategies like Derek Jeter, Tiger Woods, Dwight Howard, Kerri Walsh, Usain Bolt and Serena Williams as they are health conscious and if they endorse the products that means that the drinks are really good.