Thomas Cook is an agency associated with tourism and hospitality industry. It is a publicly traded company of British origin. Thomas Cook Group was founded on 19th June in the year 2007 by merging My Travel Group plc and Thomas Cook AG. Currently, it occupies the second place as the largest travel agency in Europe. Thomas Cook faces competition from several agencies and some of them are as follows

Product in the Marketing Mix Of Thomas Cook :

Thomas Cook is a travel company that organises tours and travels. It is a single-stop destination for all issues related to travel and tours. Thomas Cook is also the owner of tour operators, charter airlines, scheduled-airline Condor and Hotels4u, a booking website. It has a diversified product portfolio that includes numerous facilities like the following –

Side Tours or City Escape

Place in the Marketing Mix Of Thomas Cook :

Thomas Cook has spread its presence in the international arena to include several global countries. It offers tours to destinations like United Kingdom, Egypt, Greece, Caribbean, Corfu, Portugal, India, Turkey, United States, Spain and Italy. It has its headquarters base at Peterborough in England.

Price in the Marketing Mix Of Thomas Cook :

By the end of the financial year 2015, estimated revenues of Thomas Cook were 7,834 million pounds and its net income 19 million pounds. It has targeted frequent travellers as its potential customers and offers them a combination of travel plus financial services so as to increase its overall profit and revenues.

Thomas Cook has decided to drive towards profitable growth by offering best possible holiday experiences at affordable rates. It has adopted mid-premium pricing policy so that it can capture a greater market share in the tourism industry. Accessible and reasonable rates have helped the firm in achieving larger revenues.

Promotion in the Marketing Mix Of Thomas Cook : 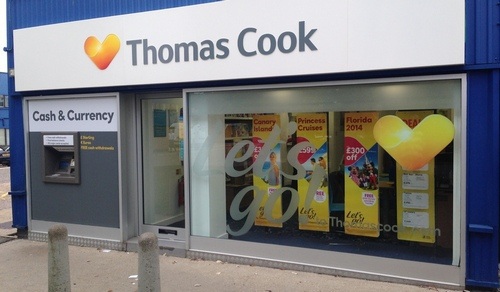 Thomas Cook has adopted an aggressive marketing policy to maintain and increase its brand awareness in the international market. It has launched several innovative and informative ad campaigns with help of print and electronic media in popular channels of television, radio, billboards at popular places, newspapers and travel magazines. Thomas Cook has also launched campaigns with help of social media portals via its own website, Facebook, Twitter, Instagram, YouTube and travel blogs.

It has entered into various sponsorship deals to increase its visibility in the market. Thomas Cook has become a sponsor of football clubs Peterborough United and Manchester City. It has also sponsored 2012 London Olympic Games and offered accessible and affordable accommodation and holiday packages to interested parties. Its tagline is Let’s go. Thomas Cook has been the recipient of several awards and recognition via its subsidiary companies. It received Best Website Award by ABCI, PATA Gold Award in the year 2005 and Best Technology Award in The year 2005.