Kelloggs is an American Public ltd company that deals in manufacturing of food products. This multinational company was founded in the year 1906 by Will Keith Kellogg, and has its headquarters in Michigan in United States. The company’s present chairperson is James M Jenness and its CEO is John A Bryant. Presently Kelloggs has the distinction of being the second largest company in the world in terms of snack foods. The mission of the company has been to provide healthier food products to its loyal consumers. Some of the chief competitors of this global brand are as follows

Product in the Marketing mix of Kelloggs 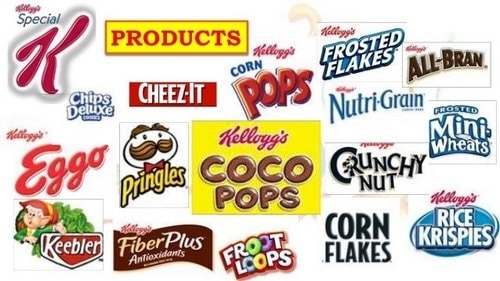 Kelloggs is related to the food processing industry and manufactures various types of cereals and food products. Awareness in living a healthier lifestyle has resulted in many of its products.  Some of its valued products are as follows

The cereals of Kelloggs are its cash cow mainly because it has a large market share for cereals across the world. The major advantage of its cereals is that it focuses on fitness, which has made it an instant hit as a breakfast option.

Place in the Marketing mix of Kelloggs

Kelloggs is a global company and serves a worldwide area that includes manufacturing plants in nearly eighteen countries like Canada, UK, Australia, Asia and Latin America. The marketing and selling of its products is achieved in nearly one hundred and eighty countries.

The largest manufacturing factory of the company and its headquarters of the European branch are situated at Trafford Park that is located in Manchester, England. The company has its own distribution channel in place and handles the network efficiently. The team consists of sales members, brokers and distributors.

In order to reach the consumers at proper time and place the company has also opened warehouses that keep a well-stocked supply of products that are quickly and efficiently dispatched when required. Kelloggs have dealt with the retailers directly in order to send the products to the customers at a quick pace.

The availability of the product in accordance with the suitability of the consumer is a very important determining factor in the sales figures. Ample stocks are stored and displayed in all the shopping malls and various outlets for pushing sales. Many people purchase kelloggs in a planned manner, but impulse purchases also contribute a lot.

Price in the Marketing mix of Kelloggs

These prices are somewhat flexible and competitive as in between the company announces discounts and schemes to generate more sales because high volumes will lead to more revenues. Different manufacturing costs at different places have also resulted in varying pricing policies of the products. With more and more cereals being launched in all markets, the pricing is leaning more towards the usage of competitive pricing then anything else.

Promotions in the Marketing mix of Kelloggs

Kelloggs has an excellent marketing strategy. In order to make the consumer aware of its brand and their products it has taken the usual help of media. Its promotional campaigns are telecast on the television especially on the kids channel and the prime time slot. Kellogg’s has rightly targeted the women and kids as they realize the potential of these two sexes. One the influencer, and the other is the decision maker for their house (especially kitchen).

The ads are also shown in the print media like the newspapers and the magazines.  In order to attract the kids, the company has also repeatedly, introduced some gift items in the boxes of cereals. The consumers appreciated this very much.  In its marketing strategy Kelloggs has also distributed fun comics with the Corn flakes for the kids.

The company has taken the help of Merchandises to promote their products.  In another promotional move, a PC game, Mission Nutrition, was released with some special packs of cereals.  Free samples of new products along with current products have helped the company in creating awareness about the launch of the new product. In the year 1992, Kelloggs became the sponsor for #41Chevrolets in the auto-racing arena.

The company also sponsored “Terry Labonte” from the years 1993 to the year 2006. As part of promotional activity and educative information, the company lists its contents, nutritional value and other important information on the packaged boxes. This information is provided in English and the regional language of the place.  In fact, kelloggs is one of the top FMCG companies to whom other  FMCG companies look upto for promotional and management ideas.