In the year 1950, William Rosenberg launched a company that dealt with Beverages and food items. The headquarters of this company is in Massachusetts in the USA. Originally, the company decided to start with food items that were distinctive and of high quality with extra emphasis on freshness.

As the brand name suggests the idea was to provide the customers fresh doughnut and a hot mug of coffee but later it gravitated to other selected baked products. The services rendered by the company have created a steady base of consumers that are loyal and regular. Some of the important competitors of the company are

Product in the Marketing mix of Dunkin Donuts 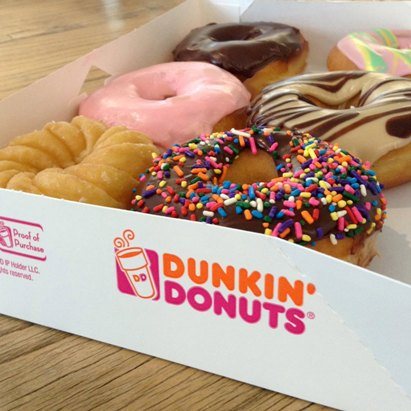 Although, the brand name suggests that Donuts are the main food product of the company, but in reality it occupies only eight percent of the total sales. Twenty five percent of the products are the other food items including the specialized baked products. The main earner for the company is its drinks, specially the coffee that is Double Brewed to retain its original flavor and for which the customers come from far and wide. The estimated sale of the special coffee at Dunkin Donuts is estimated at nearly one million annually. The menu of this international chain of restaurants includes nearly one thousand food items. The healthy snacks are a hit with every age group of people because of its freshness and uniqueness.

The various sandwiches include the all-time favorite Wraps, Glazed Donut sandwiches and the Oven toasted sandwiches. The fifty-two variants of baked goods include Cookies, Bagels, Doughnuts, Munchkins and Muffins. Beverages are served to the customers in both hot and cold forms.  The iced drinks include iced coffee, latte and tea whereas the frozen drinks are available as coolants and coffee.

Hot drinks are also very popular in these restaurants including various types of coffee, tea, latte and hot chocolates. The company has given special attention to its customers who are children as they are capable of influencing the eating habits of the parents. Food items that are fresh as well as tasty and healthy are hits with both the children and their parents. Nutty Donuts is one such popular item made with walnut, raisin and almond that is available in both sugar and sugar-free variety.

Place in the Marketing mix of Dunkin Donuts

Special attention has been given to the opening of Dunkin Donut outlets at strategically important locations to generate the maximum number of customers. It is a given fact that easy accessibility of the outlets will help in attracting a healthy customer base. Therefore, all the outlets are located at places where a person can quickly avail himself to a bite. Dunkin Donuts have opened nearly eleven thousand outlets in various parts of the world.

It is spread globally through an estimated thirty-three countries. In the United States, only the company has nearly seven thousand six hundred outlets. Franchisee system of ownership and operation is prevalent in all the outlets. These outlets are opened in popular locations like gas stations, food courts in and around airports, Supermarkets, malls and Walmart Stores.

At present South Korea is one of the largest markets of Dunkin Donut food items contributing towards forty percent of the international sales. A coffee roasting international plant has been set up in this country along with nearly nine hundred outlets. The company has also opened its outlets in countries like India, China, Japan and Brazil.

Price in the Marketing mix of Dunkin Donuts

In order to create a loyal and strong customer base the company has tried to maintain a fair pricing policy for all its products. To provide its customers ultimate satisfaction the company has kept the pricing reasonable so that an average person can easily buy from a Dunkin Donut outlet without thinking about the expenses.

The clean environment, fresh products and realistic prices have helped in generating maximum revenues. The pricing of every food item is variable so that every customer can find something or the other that might suit his budget. In order to maintain the volume of sales the prices are kept realistic and coupons and discounts on selected items are periodically provided. These keep the customers interested and leads to profits.

The motto of the company is to provide qualitative product and services that are much lower than their competitors are. This has become possible, as they have been able to diversify their fixed costs to number of units. The company has a policy of bulk buying that automatically reduces their costs. The bidding on contracts is also very systematic and thorough process that reduces the product price. A close and vigilant contact with the vendors helps in keeping control over the supply chain and this has proved to be a vital method in maintaining low costs.

Promotion in the Marketing mix of Dunkin Donuts

The promotional strategy of the Dunkin Donuts includes advertisements through print media like popular magazines and newspapers.  The pink and the color orange in the logo of the company along with a coffee cup have made it a memorable one. It also has created catchy slogans that are aired at television and radios. Some of its famous slogans are Always Dunkin, Time to make the Donuts; it’s worth the trip, You’re Dunkin and America runs on Dunkin.

Previously Ray Allen has been associated as its brand ambassador and the company has acted as sponsors for some of the professional teams like Liverpool football club and New York Mets. Jon Goodman also gave his voice for Dunkin Donut commercials in the year 2007 and later it was replaced by the voice over from David J O’Brien.

The company has also created advertisements along a coffee cup that was named as Joe Dunkin. In the recent years, the company has been able to create many ads that have proved to be very high profile along with social messages. Some contests like the “Create Dunkin’s Next Donut” have kept the awareness alive in the promotional market. The success of its promotional strategy should be given to its fan base that is always in the middle of most advertisements through various activities. The company keeps in touch with its loyal fans through Twitter and Facebook and through various other promotional activities.