United Bank of India is a bank owned by the government of India, employing a total of slightly in excess of 15,000 persons.  It was founded in the year 1950 and has its headquarters in Kolkata India.

The bank has a three-tier organisational structure that consists of its headquarters in Kolkata, thirty-five regional offices across the country and 2005 branches that have been spread all over the country. Nationally, the bank has been able to get to great heights. The banks aim is now to expand its international wings, where its presence has already started being felt in some of the countries

Product in the Marketing Mix of United Bank of India :

The Bank’s Delivery Chanel Based Products

Most of the technological innovative products used by the company have been credited for the added convenience and speed. The company offers deposit services that include recurring deposits, fixed deposits, and term deposits. They also offer different types of loans, insurance schemes, mutual funds, tax payment services, online bill, financial management services, and online bookings among other banking services you can think of.

Price in the Marketing Mix of United Bank of India :

The United Bank of India is one of those banks that have a very transparent and clear pricing policy. Due to the dynamics of the banking and financial market, the pricing is very volatile hence it keeps on changing according to the dictates of the situations. The interest rates are the company’s main contributors. The bank extends some of the most competitive MSME SERVICE prices on the market.

Being a government-owned bank, most of its pricing policies, including the interest rates, are highly determined by the regulatory bodies and then by government policy. Customer feedback is also used to determine the prices on this platform. The normal changes that occur in the dynamic financial market are also highly used to influence the prices.

Competitor pricing and the product group price specifications are parameters used for defining price. The price mainly consists of commissions, consultation fees, and interest rates, all of which are subjected to flexible pricing with external and internal factors influencing the changes.

Place in the Marketing Mix of United Bank of India :

United Bank of India operates all over India and has a fairly spread presence all over the globe. The bank has more than 2000 branches and offices all over India, as well as about 3000 ATMs. The company does frequent analysis and short listing of strategic locations for branches and ATMs. User security and safety is always the primary determining factor when ATMs and branch locations are being selected. ATMs are functional on a 24-7 basis while all the banks are CBS-core equipped hence users can access their accounts from wherever they are.

Promotions in the Marketing Mix of United Bank of India : 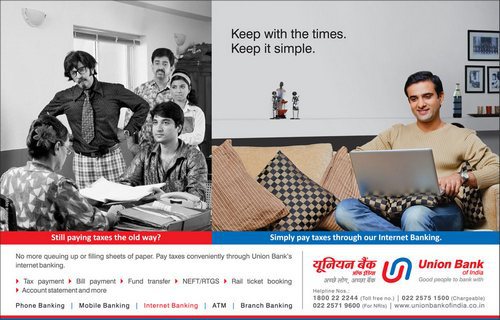 Numerous media channels are used to promote the company’s products. The strategies used in promotion involve the indirect as well as direct communication. In the adverts, the bank emphasises on the modern facilities together with the benefits gained by those who do business with the United Bank of India. In general, most of the promotions are done through the electronic media, especially the TV as well as on the print media such as the newspapers and magazines. But above all, the most important aspect of its marketing strategy is its ability to offer customers with an array of the state-of-the-art modern services.