Guess is a public company of American origins. It is associated with retail and lifestyle industry and deals in accessories and apparels. Guess has been involved in various aspects of business like distributing, marketing, designing and licensing. It is also the owner of Marciano line. The company was founded in the year 1981 by its co-founders Maurice Marciano and Paul Marciano. Some of its competitors are as follows-

Product in the Marketing Mix Of Guess :

Guess is one of the most recognised brands in the Fashion industry and is associated with diversified segments like perfumes, cosmetics and apparel. One of its most distinctive qualities is its perfect fitting and unique style of clothing especially jeans that have helped it in achieving the desired position in the consumer market. Guess is for fashion-centric people and caters to every gender and its product kit includes-

For women it has

For men its collection includes

Its kid’s section is for both boys and girls and is divided into three segments according to age-group. These are below 2 years, between 2-6 years and the junior section between 6-16 years.

Place in the Marketing Mix Of Guess :

Guess has an international presence and spread its network to several countries in the world. Its headquarters base is in Los Angeles in the United States. Guess started its operations from an outlet in Beverly Hills and currently has outlets in Middle-East, Latin America, Australia, Africa, Europe, South America and Canada. Guess has a strong distribution channel and it includes direct-to-consumer, licensing agents and wholesalers.

Direct-to-consumer options include retail stores and e-commerce portals. In Canada and the United States Guess has 450 outlets and outside both these countries, it has 380 outlets. In Asia and Europe, it also has smaller-sized 190 concessions. Guess operates through international and domestic wholesale channels and its distributors and licensees have operations in 800 global outlets.

Price in the Marketing Mix Of Guess :

Guess has product range for different sections of society. It has a selective and high-quality range for high-class people who do not think twice before spending on something worthy. It is for them that the brand has adopted a premium pricing policy. Guess has also created a collection of lower-priced products for the upper-middle and middle-class section and has kept a reasonable pricing policy for such items. This makes the products affordable and helps in creating sales volumes and ultimately in earning greater revenues.

Promotions in the Marketing Mix Of Guess : 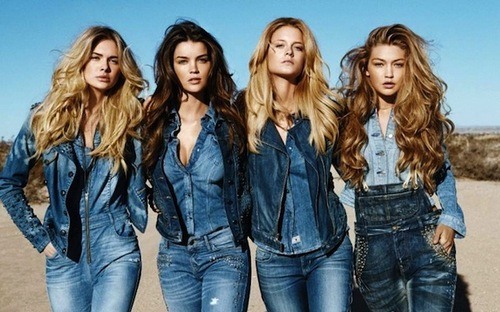 Guess has relied heavily on advertisements to market its products and create positive brand awareness. Its advertising department handles all promotional activities from its Los Angeles base. In the year 1985, it launched black-and-white ads that went on to gain an iconic status as it earned several Clio Awards. Consistency has been maintained in its campaigns and advertisements by following a particular image or theme. Guess has print media to its advantage by placing ads in several international and national magazines including Vogue, Vanity Fair, Elle and Marie Claire. It also communicates through its several websites by providing related information.

Guess has been a believer of celebrity endorsements and has numerous supermodels as its fashion models including Julia Lescova, Kate Upton, Valeria Mazza, Eva Herzigova and Claudia Schiffer. Back to the Future movie was released in the year 1985 and denim clothing from Guess was specially designed for its character Marty McFly as part of its promotional activities.