LeapFrog enterprises Inc is referred simply as LeapFrog. It is a public company of American origins. It is associated with media and entertainment industry with its manufacturing of educational toys. LeapFrog was founded in the year 1994 by its co-founders Robert Lally and Michael Wood. It has targeted children as its potential customers by offering to impart knowledge via games and toys. It faces competition from several brands including-

Product in the Marketing Mix Of Leapfrog :

LeapFrog deals in marketing, developing and designing of learning products and also contents related to it. These are technology-based and are specially made for educating kids since infancy to grade school. LeapFrog has a diversified product portfolio that includes-

Place in the Marketing Mix Of Leapfrog :

LeapFrog caters to the worldwide audience and has its headquarters base at Emeryville in California. It has adopted an intensive distribution strategy to gain maximum market coverage by penetrating into unchartered areas. LeapFrog’s divisional office in the United States is responsible for the marketing aspect and the items are sold directly to regional and national mass markets, distributors, retail stores, speciality retailers via sales representatives.

The company also has online stores and it is very easy to make a purchase from its online portal. International segment of LeapFrog is responsible for marketing, localisation and product sales outside the United States and this has been possible through efficient handlings from sales offices in places like United Kingdom, Mexico, France and Canada. The company has marketing and distribution arrangements in countries like Germany, Spain, China, Japan and Australia.

Price in the Marketing Mix Of Leapfrog :

LeapFrog is an educational entertainment organisation that targets children for imparting knowledge via the help of technology and toys. In order to gain a surplus of earnings over production cost, it has adopted revenue-oriented pricing strategy along with status-quo pricing and price skimming.

The price range of LeapFrog products varies from reasonable to expensive so that people from every section of society belonging to any economic stature can partake in learning experience offered by the brand. It has also taken care of competition from rival companies by implementing competitive prices that can’t be beaten in the current cut-throat market.

Promotions in the Marketing Mix Of Leapfrog : 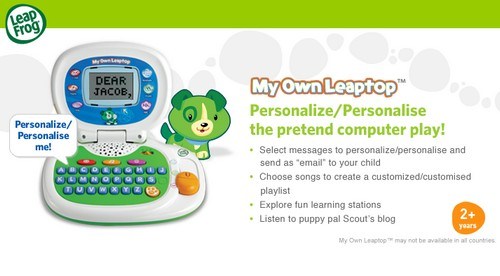 LeapFrog utilises every possible advertising tool at its disposal to gain maximum brand awareness. Its marketing strategy includes sales promotion, public relations and personal selling. In the year 2009 company decided to include other marketing plans like direct-to-consumer through LearningPath.

It is an important tool offers downloaded books, games, online-learning experience and online rewards program.  It simultaneously tracks the progress of a child. LeapFrog communicates its messages and offers via local newspapers and in-store advertisements. Retail partners of the company also run its own advertisement campaigns for sales promotion and impulsive buys via in-store demonstrations.