Hummer is a subsidiary of its parent company General Motors. It is associated with automobile industry and deals in manufacturing and distribution of SUVs and trucks. Company was founded in year 1992 and became defunct in the month of May in year 2010. Hummer had a strong emotional appeal with a sense of preparedness and capability towards any situation. Vehicles from Hummer were not for everyone but for selected few who could afford it despite its high prices.  Some of its main competitors are as follows-

Product in the Marketing Mix Of Hummer :

General Motors won a contract with United States army and designed a prototype vehicle to suit their particular needs. Later the company launched a civilian version for public usage under brand Hummer.  It was projected as a brand that supplied all-terrain, rugged and strong vehicles. Iconic designs and durability were its main assets. Models under the product portfolio of Hummer are as follows –

Place in the Marketing Mix Of Hummer :

Hummer was of American origin and had its headquarters base in Detroit in United States. It started its operations for its first vehicle H1 from assembly plant at Mishawaka in Indiana. H3 models were manufactured at its plant in Struandale, Port Elizabeth in South Africa. Another plant was opened in Shreveport at Louisiana in year 2005 and in year 2006, in Avtotor in Russia. Hummer vehicles were available in markets like United States, Europe, Australia and Asian countries like Japan. Brand had a strong distribution network that was dependent on its dealers through alliances and partnerships in thirty-five countries by the end of year 2006. Vehicles were easily available through them.

Price in the Marketing Mix Of Hummer :

Hummer brand catered to the needs of a special category of customers that believed in its ruggedness and durability features. These were not projected as conventional modes of transportation but as luxury items, which offered extra safety features in adverse conditions. Because of its special features production cost of Hummer vehicles was a bit high than similar sounding vehicles of its competitors. Brand adopted a premium pricing strategy for its vehicles as it realised that its potential customers were willing to pay extra amount for these the high-end products.

Promotions in the Marketing Mix Of Hummer : 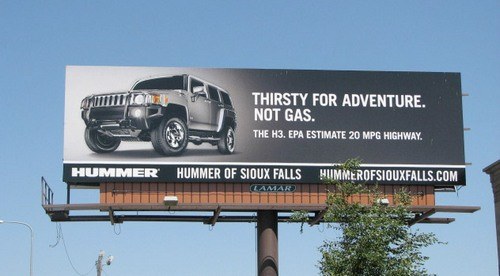 Hummer had a very strong aura that helped in popularising its brand image. It had a self-descriptive tagline-“Like Nothing Else”. American actor and state governor for California Arnold Schwarzenegger was a fan of Hummer vehicles. Racing team of Hummer started in year 1993 and was led by Rod Hall, an off-road racer.

Robby Gordon in H3 participated in Dakar Rally.  Brand became hugely popular and this was because of its positive image that projected the vehicles as safe for all-terrain. Trucks were featured in commercials that were advertised through print media on billboards. Hummer had an official website that dished out specifications, warranty, service details, pictures and customer experience to the interested parties so as to create a positive influence.