Snapple is an American origin brand associated with beverage industry. It is a subsidiary of its parent company Dr pepper Snapple Group. The company was founded in the year 1972 as Unadulterated Food and was renamed to its present name Snapple in the year 1980. Its co-founders were Arnold Greenberg, Hyman Golden and Leonard Marsh. It faces competition from following

Product in the Marketing Mix Of Snapple :

Snapple deals in manufacturing, developing and marketing numerous drinks like regular and diet tea, bottled water, lemonade and juice drinks. It is also available in aluminium cans. Snapple beverages are fortified with minerals and vitamins to make it delicious, healthy and tasty. Its diversified product portfolio includes-

Place in the Marketing Mix Of Snapple :

Snapple is an American company that started its operations from East Meadow in New York. It has its headquarters base at Plano in Texas. It spread its product presence in international markets to include countries like Greece, Denmark, Sweden, Germany, Norway, Ireland and the United Kingdom. By the year 1992 Snapple had a unique distribution policy. It expanded its distribution channel to include every important city in the United States by signing contracts with several beverage distributors. It did not have its own manufacturing facilities but signed deals with thirty bottlers and was thus able to keep its overhead low.

Price in the Marketing Mix Of Snapple :

Snapple is a non-carbonated drink and is projected as a premium product with innovative flavours. Its main mantra is 100% Natural and has targeted health-conscious as well as a young generation as its potential customers. Snapple has adopted a premium pricing policy because of its superior product quality. At a time when every beverage industry has adopted a competitive strategy, Snapple’s premium pricing stands out and create a successful and distinctive image of its own.

Promotion in the Marketing Mix Of Snapple : 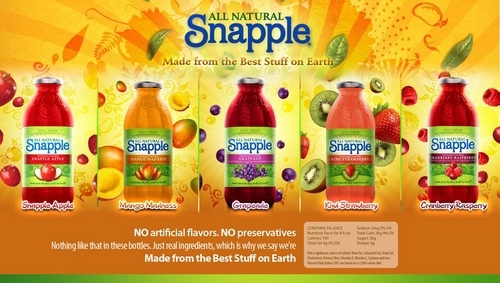 Snapple has always believed in the power of advertisement and has launched several ad campaigns over the years to create further brand awareness. Advertisements launched in the early 1990s had Wendy Kaufman interacting with Snapple fans via letters. In the year 1992 it launched new advertisements on television with one of its most popular taglines Made from the best stuff on earth. Its radio commercials featured Rush Limbaugh and Howard Stern.

Snapple was aware of the effect of celebrity endorsements on consumers and roped in tennis star Jennifer Capriati as its brand ambassador. In the year 2003, October it became a sponsor of New York City Public school System to make its product official beverage of New York City. Snapple was the primary sponsor at IndyCar Series Season 2014 till 2016 of Marco Andretti and official beverage-sponsor of season seven to nine of America’s Got Talent.