Google is an American corporation dealing in products and services that are based on internet. This multinational company specializes in search, software, online advertising and cloud computing. Google is a public company started by Sergey Brin and Larry Page in 1998 with a $100,000 investment.  Google has come out as a winner amongst all the other search engines because of its smart choices, excellent ideas, perfect implementation of ideas and exclusive products and services.

Google faces a stiff competition from its adversaries who acts as motivators for the company. Some of its competitors are as follows:

Products in the Marketing mix of Google

The search engine of Google catalog pages gives fast results and specializes in technology and innovative concepts. The information obtained from the Web pages is utilized in maximum capacity. Google is a distribution channel offering Google Places, Google Maps, Google Video, Gmail and Google Ad-words as their specialized products.Google Inc. is a new company launched by Google. Google offers facilities as goods to its users. Product is one of the strongest P’s in the Marketing mix of Google. These products can be divided into three categories that are as follows:

Without further ado, and instead of going on about one of the best companies in the world, here is a list of all 151 (and increasing) products of Google. 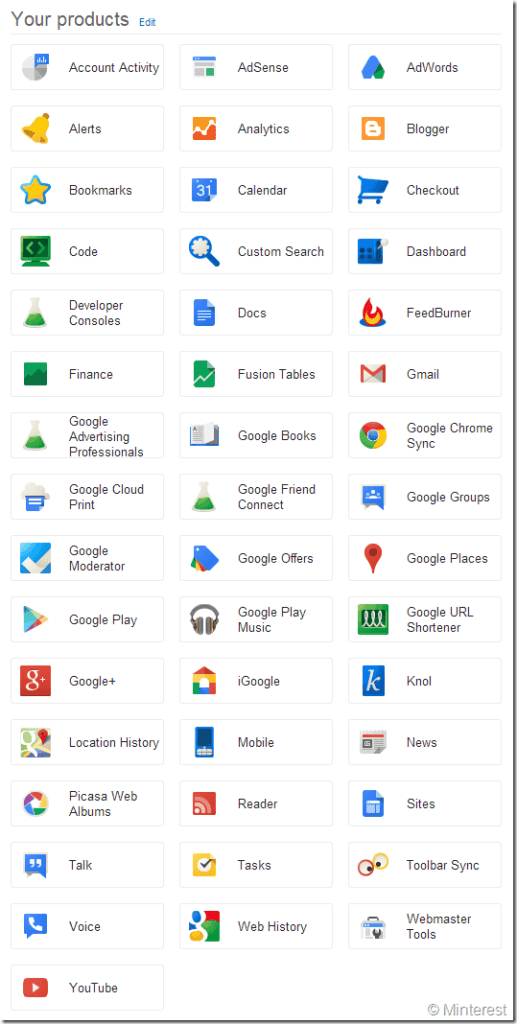 Place in the Marketing mix of Google

Appropriate place is an important factor while targeting the prospective buyers. Google concludes all its activities in and through internet. At present the number of searches/day Google processes is nearly 200 million. It maintains its expertise through 14 locations in Asia, 23 in Europe, 5 in Middle East and 3 in Latin America.

Google also offers the choice of many regional languages to its customers. The number of employees it has is more than 52,000. The employees are equipped to handle all kinds of job and emergencies. Their contribution extends to almost all the areas.  While recruiting them their abilities and expertise are crosschecked to see whether they would suit the needs of the company. Google also has a very experienced search team whose job is to collect all the available data in any part of the world. The collected work is then scrutinized and later is helpful in filtering the search logarithm.

Google is situated at California in United States of America. Its Headquartersis at Mountain Viewand goes by the name of Googleplex. Google has entered into many partnerships. It has started on a research project with ‘NASA’ on various issues like Data management on a huge scale.  Google has entered in a partnership with ‘Sun Micro systems’has helped both of them in sharing and distributing each other’s expertize.

Price in the Marketing mix of Google

Google products are low cost and strive to give best possible results. Their pricing policy is dependent on the value of their goods. For business products, amount that is to be charged to the clients is determined after looking at the innumerable expenses occurred during that transaction.  All the factors such as allowances, list price, payment periods, discounts and credit terms and conditions are evaluated and after a lot of contemplation, the price is set.The price policy also involves scrutinizing the current market and on its competitors policies.

Google mainly earns through Ad-Words, which is an advertising program by Google.  These advertisements are based on keywords that are bought by interested corporations. For example – A movie which is about to be released in coming 2 weeks will make a campaign on Google’s adwords platform for all the entertainment sites all there. It will pour in a lot of money to advertise on other sites, and Google will in turn keep a percentage of this money as operational expenses and profit for its online advertising platform – Adwords.

Promotion in the Marketing mix of Google

Google is committed to keep its focus on the search engines. The company has changed the concept of advertising and its huge success has proved to be an inspiration for other companies. Google operates mostly through word of mouth advertising. The satisfied customers have been their best advocates and have resulted in the development and expansion of the brand name. To have a firm grip on the market Google offers best and precise services. It is simple, clean, advertisement free and so the homepage can be loaded with minimum fuss and in miliseconds, and the viewer’s appreciate its direct approach.

The hassle free experience has resulted in Google becoming the 2nd most valued brand of 2016. Google is a prime example of ‘Product marketing’ and the top-notch products and services have been the most important factor behind its success.

Google provides free services to consumers and itself sells the advertisement on the pages where the consumer lands up. It collects data from all over the world and gives its customers one single and easy to use platform. This hassle free experience has been a hit with the viewers. As Advertisement is an endless game, Google too looks to be in it for the longest haul possible.

Google has recently launched ‘Froogle’ a new and separate website that relates to product search. Best services and public relation has helped the website in its immense growth and that to only by mouth publicity. The company has a distinctive policy where it maintains that all ads are labeled as ‘sponsored links’. Google relies solely on its loyal viewers who has created and maintained a buzz about this brand name through mouth publicity.

In order to increase the awareness about its brand name Google has taken the help of advertisements on radio, television and the print media. The most talked about ad was that for Android Mobile Phone to which the company provided a suitable platform. In 2009, advertisements were posted on billboards illustrating the words ‘Going Google’When Google Chrome was launched ads with tag line “Download Google Chrome Today” were released. The ads related to Google are always simple and informational and they are mostly placed on sites using Ad-words.