Hot Wheels is a manufacturing company that deals in die-cast toys. It is of American origins and is owned by its parent company Mattel. Production line of toy cars from brand Hot Wheels was first introduced in the consumer market in the year 1968 and since then the company has been making scale models for various automobile manufacturers. Although its target customers were children but over the years the brand has found a successful place amongst adult collectors through limited edition and several other models. It faces stiff competition from other toy manufacturers like

Product in the Marketing Mix Of Hot Wheels :

Hot Wheels is a world recognised brand with an extensive product range. It is a toy manufacturer of 1:50, 1:18, 1:43 and 1:64 scale cars. Its latest mainline offerings include nearly two hundred and fifty releases with the toy cars being divided into further thirty segments. Product kitty of Hot Wheels include some of the following items-

Place in the Marketing Mix Of Hot Wheels :

Hot Wheels is an international brand with a vivid presence in global market. Its products are easily accessible in various parts of the world. The company has adopted an intensive distribution channel that includes manufacturing plants, distributors, retailers and lastly customers through several outlets like super markets, toy shops, malls, discount stores and hypermarkets.

It has a strong distribution policy that is heavily dependent on its retailers. Mattel has teamed up with retail organisations like McDonald’s, Avon, Full Grid, Getty, General Mills, Malt-O-Meal, Shell, Tony’s Pizza, Walmart and Valvoline so that its products are easily accessible in every nook and corner of the world.

Price in the Marketing Mix Of Hot Wheels :

Brand Hot Wheels is a household name because of its popularity amongst children. Company realises that a distinctive pricing policy is necessary for survival and success of every organisation. In order to maintain its position brand has adopted a reasonable pricing policy so that its products are easily on hand to its customers.

It has implemented competitive and penetration pricing strategies to deal successfully with its competitors. Hot Wheels products are sold through online channels at very reasonable prices because the company is able to save on distribution costs. Affordable rates have helped this brand in achieving higher volumes and ultimately larger revenues.

Promotions in the Marketing Mix Of Hot Wheels : 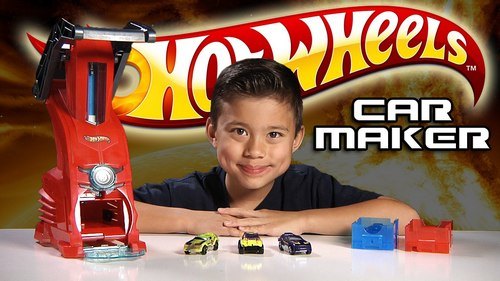 Hot Wheels is a well-liked company with the high brand recall. It relies heavily on its marketing team to maintain brand awareness amongst its customers. Hot Wheels has an apt tagline Go with the Winner. In order to retain its positive influence brand periodically organises several contests for enthusiasts all over the world.

It has developed an excellent promotional campaign that has helped in leaving a lasting impression through successful advertisements. Its commercials are catchy with both fun and vow factor and are advertised through electronic, print and social media. Ads belonging to Hot Wheel brand are displayed on several television channels, magazines, billboards and newspapers.

The Company has released video games as part of its promotional strategy. It has also introduced various schemes, for instance, a bonus car was provided on purchase of four car-sets. Hot Wheels signed a sponsorship deal with McDonald’s so that several toys were part of Happy Meals.