Xperia is a Japanese brand name of tablets and smartphones from the global powerhouse company: Sony Mobile. Formerly Ericsson Mobile Communications (1994-2001), then Sony Ericsson (2001-2012), the name Xperia has been derived from the English root word “Experience”, signifying that the company has a vast experience in what it does.

Xperia was first released with the “I Xperia the best” accompanying tagline. Today, Xperia offers its products to a worldwide market, with operations being coordinated from its Tokyo, Japan headquarters. As you are most likely aware, Xperia’s parent company-Sony-is one of the leading thus most sought after manufacturer of electronic products, especially those electronics within the communication field.

Product in the Marketing Mix of Xperia :

Price in the Marketing Mix of Xperia :

Xperia products are priced in a very strategic manner with the three-tiered pricing strategy highly being employed. This is very appealing to all the three market segments namely: the economy shoppers, the middle-class market segment as well as the high-end buyers.

Upon the release of a new unique product for the market, Sony tends to employ the price skimming strategy. This implies that a high price is marked on the newly released product after which the prices are gradually scaled down. This helps in profit maximisation upon the release of the product with the sales volume being boosted later on upon the decrease in pricing. The consistency, brilliance, and performance of Xperia products still make them be dominant even at that time when the price is still quite high.

Place in the Marketing Mix of Xperia :

A selective distribution channel is practised from very selective dealers e.g. SONY WORLD. Indian buyers are known to have the clamour for durable long lasting products and this is exactly what Xperia offers to them. In India, Xperia’s distribution network comprises of about 7,000 channel partners as well as at least 260 Sony outlets. Xperia is all over the world, with different distribution channels being employed in different places and regions.

Promotions in the Marketing Mix of Xperia : 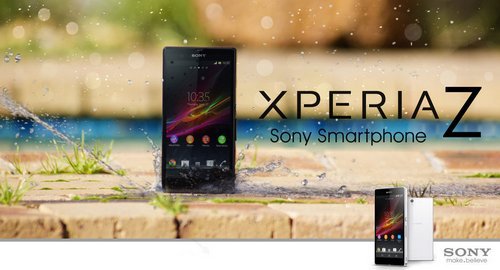 Xperia employs some of the best promotion practices hence its continued popularity in the world. Sony’s tagline “Make, Believe” is one promotion aspect that passes a message that unites the company’s initiatives across its mobile phones, network services, movies, music, and electronics etc. The company’s innovation and creativity spirit are also symbolised by this tagline.

The use of celebrities for product endorsement is yet another popular aspect in the promotion mix. Popular faces to have been used in the promotions include those of actors Kareena Kapoor and Deepika Padukone, with Katrina Kaif being the latest brand ambassador of Xperia.

The television commercial and print media are some of the most common avenues of promotion. The company also makes good use of digital marketing, especially the social media internet marketing segment. Xperia billboards can also easily be spotted in different locations globally, especially when a new product has been released for the market.