MTR Foods is associated with beverage and food processing industry and offers packaged food and beverage items. It is of Indian origin and is a subsidiary of its parent company Orkla, a conglomerate of Norwegian origin. MTR Foods started from a small restaurant and then stepped in as a packaged food-manufacturer and returned again to its roots as a franchised chain of quick-eating joints. Some of its competitors are as follows-

Product in the Marketing Mix Of MTR Foods :

MTR Foods is a food product company offering a diversified range of packaged food products. It uses authentic recipes, high-quality oil and best ingredients to retain and ensure homemade aroma, taste and flavour. Products are prepared in the strict hygienic atmosphere so that packs retain crispiness and freshness. It includes items for breakfast, meals and in-between meals like-

Place in the Marketing Mix Of MTR Foods :

MTR Foods has spread its domestic presence to most parts of India and has its headquarters base at Bengaluru in Karnataka. Its products are exported to several countries in world market like Singapore, Malaysia, Mauritius, Japan, Middle-East, New Zealand, Australia, Germany, United Kingdom, Canada and the United States. MTR has also opened its fast-food restaurants on franchisee concept called MTR Super Shops and these are located in most cities and towns of India.

MTR Foods has seven facilities to conduct manufacturing process. It has a strong and extensive distribution network that includes services of distributors and retailers. Its products are easily available to consumers through its own stores and in super markets, hyper markets, discount stores, convenience stores and grocery stores. MTR Foods has launched its e-commerce platform from Bengaluru as a venture to move with changing times.

Price in the Marketing Mix Of MTR Foods :

MTR Foods is estimated as rupees 700 crore company with a growth rate at 18% CAGR.  Its exports account for nearly 20% and sales in Southern states to 60% of its total revenues. MTR Foods has adopted a market penetration pricing policy and has implemented reasonable rates for its products. Pocket-friendly and affordable rates will help the company in reaching further markets. MTR Foods has launched its web portal as a much-needed initiative to garner larger profits as it will be able to cut down on its distribution costs. It has also implemented promotional policies and offers incentives like 20% extra product with the original.

Promotion Mix in the Marketing Mix Of MTR Foods : 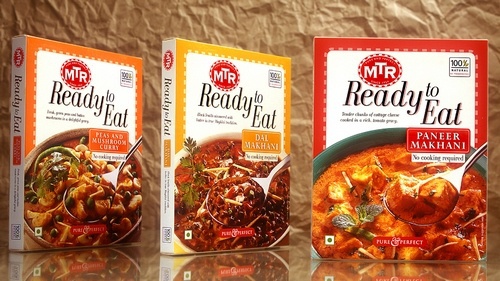 MTR Foods is pursuing an aggressive and intensive marketing strategy at regional, national and international levels. It has organised sampling activities at popular places and launched several ad campaigns via television, magazines, newspapers and social media platforms to garner maximum coverage. It has collaborated with Jiggs Kalra, celebrity chef to increase its brand visibility. MTR Foods in the year 2002 was awarded ISO 9002 certification as it successfully met the food hygiene and safety standards in the international arena. It was the first company in India to receive an award for Technology Absorption by Prime Minister.