Founded in the year 1998, Google is a gigantic technology corporation from the USA. It is also understood that Google’s business model is based upon hidden business models because, in this, users do not pay for the Google services and the main revenue comes from the paid media.

Larry Page and Sergey Brin founded Google when they were Ph.D. students at Stanford University in California. Its domain name www.google.com was registered on September 15, 1997, and Google as a company was incorporated on September 4, 1998.

In the beginning, Google was funded by an August 1998 investment of $100,000 from Andy Bechtolsheim who was the co-founder of Sun Microsystems. In addition to this, Google also received money from three other angel investors in 1998-

After this, the few additional small investments occurred through the end of 1998 to early 1999 and then a new $25 million round of funding was announced on June 7, 1999, that also had the investors like venture capital firms Kleiner Perkins and Sequoia Capital.[

The mission statement of Google is to

Organize the world’s information and make it universally accessible and useful.

What is Google Business Model Canvas?

For those who are regular users of the internet, Google is a site that is pretty common for sure. There is simply not a single speck of doubt about the fact that Google is the most important and popular site all over the world.

The company has managed to secure the top position in the list of the best sites in the world. Not just that it is one of the most popular search engines as well.

The Google model can appear to you somewhat complicated, which it is. Though, when broken down into main sections, the Google Inc. business model becomes clearer. Here are the different areas that are covered under Google Business Model Canvas-

Key activities include research and development for the creation of new technologies and features as well as the enhancement of current ones. Crawling, indexing, marketing, building ecosystems, improving searching, searching, matching, and presenting.

There is also a substantial amount of effort spent on the upkeep and management of enormous IT infrastructures, goods, and services. Aside from that, marketing, strategy, and relationships are being worked on as well by Google.

They would include data centers, servers, and other IT infrastructure, IPs, and human resources. Patents, licenses, and proprietary content are examples of additional resources. Google has three important resources-

The index is Google’s database of all the material that is readily accessible to its spiders as they trawl the web. The faster and more consistently the index can be updated, the more accurate search results can be given.

The algorithms (which are numerous) select which pages in the index should show in search results and what order. These are aimed towards various goals, including increasing user relevance and value, reducing low-quality results (keyword-stuffed sites or off-topic pages), and improving advertising performance.

The Company’s goal is to provide value to its clients in the areas of internet search, advertising, operating systems and platforms, and enterprise. The mission statement’s overriding idea is to organize the world’s knowledge and make it widely accessible and valuable.

Google.com, Google affiliate websites, and Google Adwords are all ways to contact clients. Sales and support teams are two ways to reach advertisers and network members.

Sales and support services, as well as dedicated teams for bigger clients, are being used to develop customer relationships.

Other expanded categories may include mobile device users, manufacturers, and developers.

The Company’s major revenue source is its ad-powered search engine. This might account for up to 95 percent of total revenue. Google Ads, Google Shopping, Google AdSense, Google AdMob, YouTube, etc are integral to the advertising revenue streams of Google.

Google is also investing in other acquisitions like Waze, DoubleClick, Motorola Mobility, Looker, ITA Software, and Fitbit. Plus, some of their future investments incorporate different technological innovations such as Loon, Wing, Waymo, Verily, and Sidewalk Labs.

Different industries covered by Google’s products and services are- 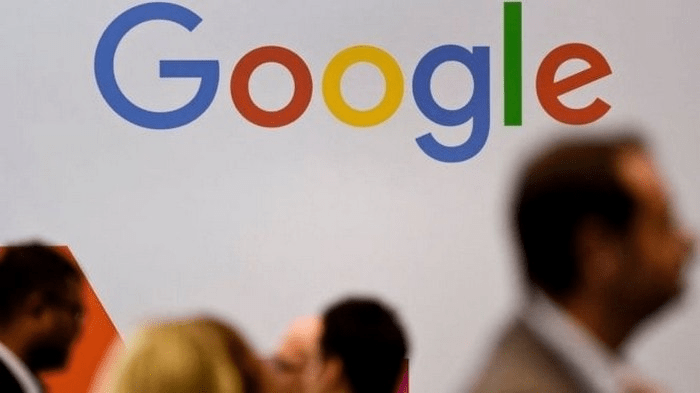 The channelization of the Google business model is associated with different segments. Now we will be going through those segments one by one:

This is the most important segment of Google’s business that also plays the most significant role in helping Google generate good revenues. Different product of this segment is-

Advertising is very significant in helping the business model Google generate good revenues. It lets businesses, marketers, and advertisers run ads on Google for which they pay Google a fixed amount. Some of the products that come in this segment are-

Key products of this segment are-

Google also offers some of the most useful productivity tools to its consumers. Let us have a look upon those as well-

Now, as you are well aware of the things that the business model Google channelizes for serving its customer base, the time has come to understand how Google makes money-

How does Google Make Money?

So, there is no doubt that it is one of the most amazing sites in the world that is used by more than 90% of the people who are using the internet in the best way.

Hence, we are going to have a little discussion about it for sure. 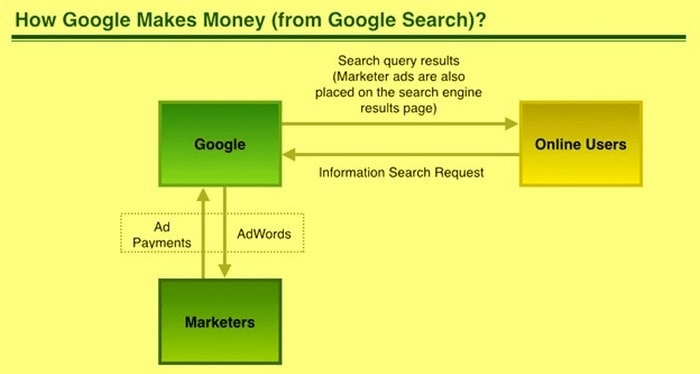 Users send a search request to Google, and then Google provides relevant results.

Now, marketers and businesses use this system to run their ads using AdWords by paying to Google, so their products and services can top the relevant search results as the answer/solution to the query of the user.

It is a fact that Google gets most of the money from the advertisements in the best way, so first; we will understand that-

Well, these are AdWords, AdMob, and AdSense. There is no doubt that without these three components, Google will not be able to advertise in the best way. Now there are different tasks for every single one of the components that are mentioned here-

For example, Google AdWords is something that can be considered as a targeted platform for advertisers out there who want to develop as well as launch certain campaigns on behalf of Google Engine in the best way.

The advertisements that will be allowed to display on the internet are selected with the help of Google AdWords. So, it can be said that it is one of the most important and amazing components for Google Advertisements in the best way.

Now when we come to AdSense, there is just one thing to say. This component is basically publisher-oriented, and it is a platform that can be used by publishers from all over the world who want to make some money by posting the advertisements that they have on their websites.

So, there is simply not a single speck of doubt about the fact that they will be able to be a part of the important Google Display Network in the best way. Now, who wouldn’t want to be a part of it, right?

We are here to tell you that with the help of these two amazing components, there is simply no doubt that Google will be able to create amazing advertisements which are going to be the best help that it needs to generate the money. 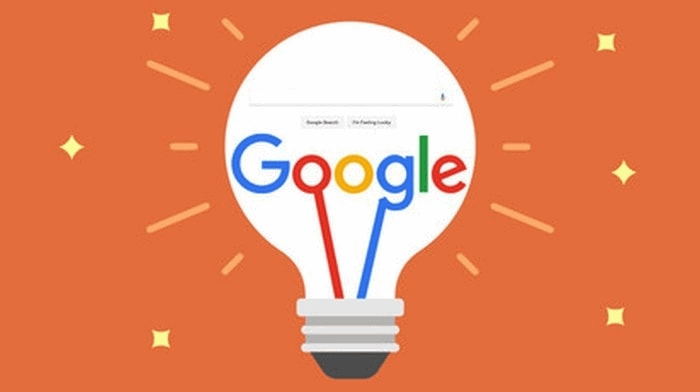 This is yet another component of the business model Google. There are so many different types of ads that Google has in the first place. So, we can say this without any form of doubt that people need to know about some of these ads so that they can have an idea about the fact that Google can make money with the help of these amazing ads for sure.

So, we can say this without a doubt that it is going to be the best thing for the Google Company for the generation of some revenue in the best way.

We are here to tell you that these shopping ads on Google are one of the major contributors to the amazing revenue that the company has got in the first place. Of course, there are some other options as well, but this is one of the primary factors for sure.

This is certainly one of the most important factors that contribute in a large way to the revenue that is generated by Google for sure. There are Google Maps which are used by the users who want to have some directions from one place to another.

There is a pretty large user base for the amazing Google maps, and it gets the amazing revenue from the API that has which is particularly used by the companies such as Trivago, Uber, Pokemon Go and so much more.

The product pricing that is paid by the users will be directed towards the company in the best way. Hence, it is certainly a fact that Google Maps is one of the biggest generators of revenue for Google Company. This is something that people always need to keep in mind for sure. 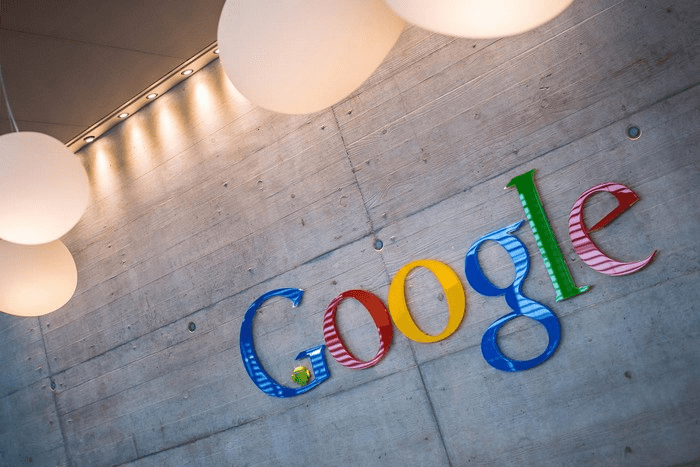 Despite the application being free of cost, there is no doubt that it is an application that can make a lot of money for the Google Company.

The reason behind this is that the businesses and the amazing individuals are constantly using the Google Translate application and the API integration that it has can help it make money in the best way.

So, that is one of the most important things that people need to keep in mind about Google Translate for sure.

Here is another option for the Google Company from which it can make a lot of money for sure. G Suite is something that can be considered as the amazing brand of cloud productivity in the best way.

There are collective and collaboration tools provided in the G Suite such as Docs, Hangouts, Gmail, Calendar, Drive, Sheets, Sites, and so much more in the most amazing way for sure. The brand would operate on a business model which is freemium for sure.

The user will be able to get a cloud space with is limited, and the features that are provided are pretty much free until and unless the user wants to upgrade and for that, he has to pay so that he can use it for his business in the best way. So, that is also one of the ways Google can make money.

Now, you’ve got a perfect analysis of Google’s Business model. Let’s move forward to learn about the key resources in the Google Business model canvas.

In the end, we would like to say that the business model and the revenue model of the Google Company depend on a lot of factors for sure.

Apart from the options mentioned above, there are so many other ways with the help of which Google can make money in the best way such as Google Chrome, Google Play Store, and other important apps and methods.

Hence, there is no doubt that people need to know more and more about the Google business model for sure. So, we hope that this article is informative for you.

Having any queries about the business model Google? Feel free to ask us in the comments.