What Is Ambush Marketing?

Ambush marketing is a controversial marketing strategy where a company associates itself with a major event without paying for official sponsorship rights. Marketers that ambush attempt to steal the attention of their competitors by ambushing their marketing activities.

Ambush marketing is a technique where one advertiser tries to take advantage of another’s campaign in order to raise brand awareness. This can be done by hijacking the competitor’s campaign or piggybacking off their success. By using such ambush marketing techniques, marketers don’t have to pay sponsorship fees for the event, but they can still get noticed by audiences.

The term “ambush marketing” was first coined by Jerry Welsh, a former marketing executive at Anheuser-Busch, in the 1980s.

Ambush marketing became more prevalent in the 1990s with the increase of global events, such as the FIFA World Cup and the Olympic Games. These events provided opportunities for companies to Ambush their competitors on a global scale.

During the 1990s, Visa and MasterCard were engaged in a “credit card wars” Ambush Marketing campaign. The two companies Ambushed each other’s sponsorships of the Olympic Games and the FIFA World Cup.

Why Use Ambush Marketing?

Ambush marketing can be an effective marketing strategy for companies that are looking to generate attention for their brand without spending a lot of money. Ambushing can be especially effective during large-scale events, such as the Olympics or the World Cup when there is a lot of media coverage and public interest.

Most ambush marketing campaigns are used to create a sense of rivalry and excitement around a brand. For example, Nike’s Ambush Marketing campaign during the 1992 Barcelona Olympics created a sense of competition between Nike and the official sponsor Reebok. 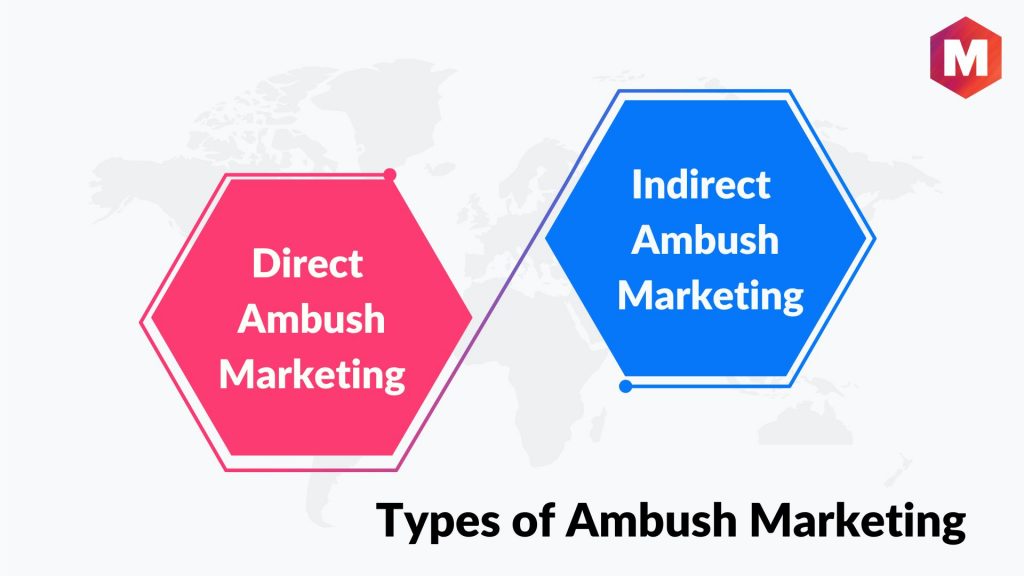 This type of Ambush marketing occurs when a company deliberately targets the event of a competitor.

Some of the types of direct ambush marketing are-

Predatory Ambush Marketing is a type of Ambush marketing in which a company deliberately tries to sabotage its competitor’s marketing campaign. Predatory Ambushing can take many forms, such as sponsoring a rival athlete or team, crashing an event or existing campaign, or using similar branding to the official sponsor.

Coattail Ambushing is a type of Ambush marketing in which a company tries to ride on the success of another company’s marketing campaign. Brands do this by being a sponsor of an individual who is associated with an already sponsored event.

Property or Trademark Ambush Marketing occurs when a company uses the property or trademark of another company without permission to Ambush their marketing campaign. Confusion among customers and decreased marketing efforts for the property’s owner can happen when a brand uses another brand’s logos, symbols, or phrases to promote its services.

Self-Ambushing is a type of Ambush marketing in which a company Ambushes its own marketing campaign. This can be done by releasing a new product or service that is similar to the one being promoted by the company. It also occurs when a brand involves in activities that are not mentioned in its agreement.

Indirect Ambush Marketing occurs when a company associates itself with an event without directly targeting the event of a competitor. Indirect Ambush Marketing Activities are used when a company associates itself with an event or a program indirectly – either through the use of similar images, symbols, or othr means, or by establishing a promotional presence at or near the event without making specific reference to it, in order to gain more exposure and publicize their goods without intending to steal attention away from rivals.

How does Ambush Marketing work?

Some of the ways of using Ambush Marketing are-

1. By creating a Sense of Competition

One way that Ambush Marketing can be used is to create a sense of competition between two brands. This can be done by Ambushing the event of a competitor or by releasing a new product or service that is similar to the one being promoted by the competitor.

Another way that Ambush Marketing can be used is to generate excitement around a brand. This can be done by Ambushing the event of a competitor or by involving in activities that are not mentioned in its agreement.

3. By getting More Exposure

A third way that Ambush Marketing can be used is to get more exposure for a brand. This can be done by Ambushing the event of a competitor or by establishing a promotional presence at or near the event without making specific reference to it.

A fourth way that Ambush Marketing can be used is to create confusion among customers. This can be done by Ambushing the event of a competitor or by using similar branding to the official sponsor.

Some of the advantages of Ambush Marketing are

1. Cost-effective way to gain exposure for a brand

Ambush Marketing is a cost-effective way to gain exposure for a brand. This is because Ambush Marketing does not require a company to spend money on advertising or sponsorships.

2. Helps to create excitement around a brand

3. Can be used to target specific audiences

It also helps to build brand equity as Ambush Marketing can help to create a positive association with a brand.

Ambush Marketing optimizes freedom and flexibility as it does not require a company to sign a contract.

6. Offers opportunity for startups to jump-start their business

7. Provides a chance to be creative

Some of the disadvantages of Ambush Marketing are

Ambush Marketing can be illegal in some cases. This is because Ambush Marketing activities can infringe on the intellectual property rights of an event organizer or a competitor.

3. Can be negative for a brand

Ambush Marketing requires careful planning. This is because Ambush Marketing activities need to be carefully planned to avoid legal issues and to maximize the benefits for the company.

Some examples of ambush campaigns are 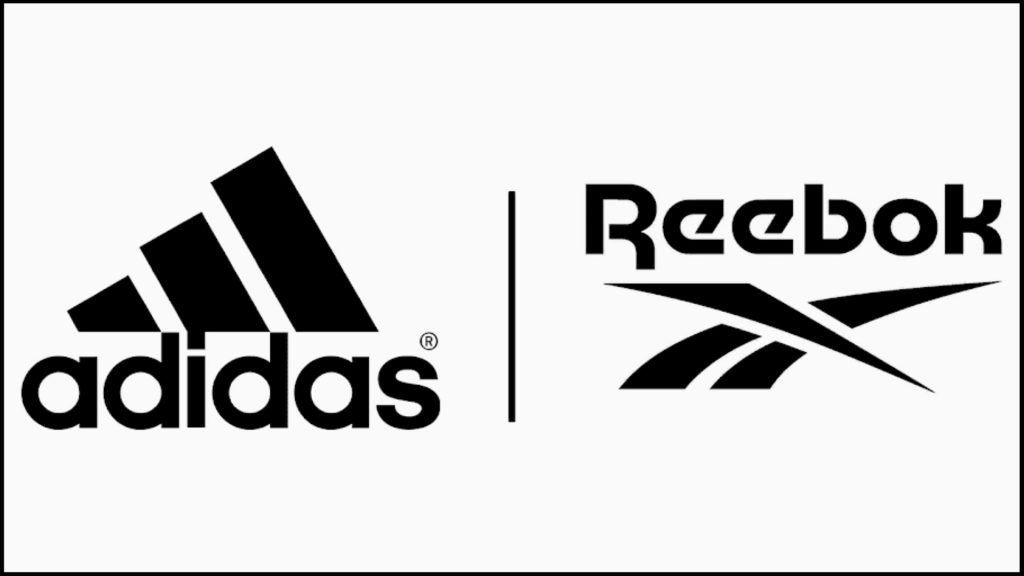 Nike Ambushed the 1992 Barcelona Olympic Games by sponsoring athletes who were not part of the official Reebok Olympic sponsor list.

Nike is known as the king of ambush marketing. It was again in 1996, during the Olympic Games in Atlanta when Reebok was a major sponsor.

Nike has printed its logo all over Atlanta for the Olympics: on billboards and banners all over town. They even built a Nike building with a view of Olympic Park specifically for the occasion.

In the FIFA World Cup 2010 in South Africa, Adidas was one of the main sponsors and took advantage by releasing its own Star Wars-themed video featuring British soccer superstar David Beckham.

However, Nike which wasn’t even a sponsor produced an online viral video with many of the players. Video went viral and people actually remembered it more, giving Nike the victory. 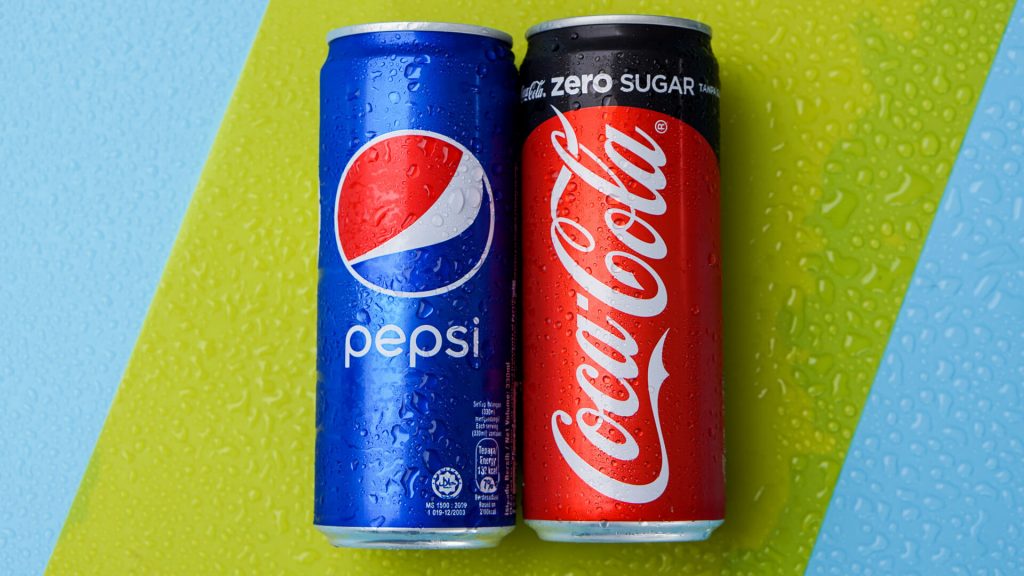 In the 2014 World Cup, Brazil, Coca-Cola was an official sponsor. Pepsi on the other hand was not.

Nevertheless, they released a commercial with some of the world’s most iconic football players such as Lionel Messi, Sergio Aguero, Jack Wilshere, and David Luiz. Additionally, PepsiCo unveiled its ‘Live for Now’ campaign.

This was a great example of how a company that was not an official sponsor managed to get massive publicity during the World Cup. 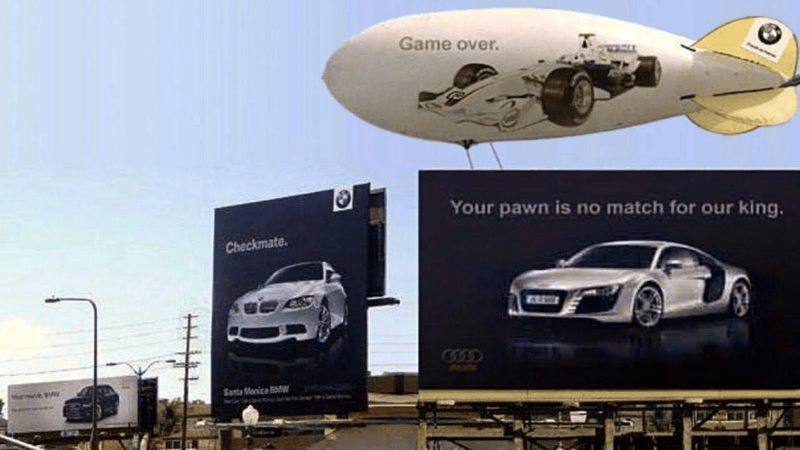 The fight for billboard dominance was between the two largest automobile manufacturers in the world.

It started not long after BMW held a rally that was publicized with an advertising campaign. The tagline of the advertisements read, “A BMW rally with two nearby service centers. What’s next, paramedics at a chess tournament?”

Chess? No thanks. I’d rather be driving.

The entirely new Audi A4.

Your move, BMW. The entirely new Audi A4

In response to Audi’s offensive, BMW bought a huge billboard and hung it on the avenue with the slogan Checkmate.

But this back-and-forth didn’t end there, as Audi responded to BMW’s checkmate ad with another chess play on words.

Here is a video by Marketing91 on Ambush Marketing.

Ambush marketing is a legal marketing technique in which a company deliberately tries to create confusion between itself and a competitor to gain attention for its products or services. While it is legal, ambush marketing can be considered unethical by some because it takes advantage of another company’s investment in an event.

For example, if Company A is the official sponsor of a sporting event, Company B might try to ambush the event by setting up a booth next to Company A’s and handing out free samples of its products. Ambush marketing can also take the form of ambush advertising, which is when a company hijacks another company’s advertising campaign to create confusion between the two brands.

Thus, while ambush marketing is legal, companies should be aware of the potential risks involved in this marketing technique. Therefore, while making ambush marketing strategies, you should pay heed to these tips when you do not have a sponsorship contract-

How to prevent Ambush Marketing?

Some of the ways to prevent ambush marketing effort are-

In the end, it is obvious that ambush marketing is a divisive marketing approach in which a firm attempts to associate itself with a major event or name without having official sponsorship rights.

This can be done in various ways, such as through advertising, product placement, or simply by creating a buzz around the event.

While ambush marketing can be an effective way to generate interest and awareness for a company, it is also considered to be a very unethical form of marketing. This is because ambush marketing takes advantage of the goodwill and investment of the official sponsors, and can often leave them feeling cheated and betrayed.

If you are considering using ambush marketing to promote your business, it is important to weigh the pros and cons carefully. While it can be an effective marketing tool, the potential backlash from sponsors and the general public may not be worth the risk.