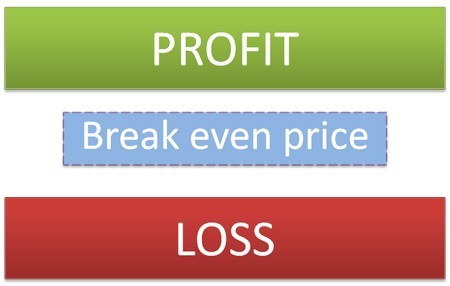 Whenever you decide to start your own business, your main goal is going to make it profitable and sustainable. But for every business in the initial stages of the development, it takes time to build profits. In these cases the best option for you is to reach a break even point, where you are neither in profit nor in loss. Profit is the most desirable goal but not losing money and to be on zero loss can also be an alternative solution rather than getting negative results on your investments.

The break even price can be described as the amount of money for which a product, service or asset has to be sold in order to cover the amount of money required for either manufacturing or providing it. The reasons behind the break even pricing consist in  penetrating new markets with low prices in order to capture the customers of your competitors and gain fast market share. It has the potential of being successful if the company has the necessary resources for increasing its production volumes until it manages to reduce costs and make profit at what had previously been the break even price. Thus, economies of scale is another objective of Break even price.

Although it might sound like an excellent idea, besides its clear advantages, this strategy also implies different drawbacks, which if not controlled properly can become an increased risk for the development of your business. If we were to think about the main advantages, the break even price can act as an entry barrier and as a tool for market domination and competition reduction. Using a break even pricing strategy is equivalent to discouraging new entrants to penetrate the market as the profits would be minimal or non existent. At the same time, not all existing competitors of the market you chose to enter will have the strength to fight with your lower prices, finally collapsing. Finally the market domination is obtained when you increase production capacities and achieve economies of scale.

But let’s take a look at the drawbacks now. We have been speaking in a previous article about the penetration pricing. Something similar can happen also by using the break even price. Once you present the market with a really low cost compared with your competitors, it is hard to increase prices afterwards. It might be possible by improving the quality of the offered product or service. Once you enter the market with a low price, you might risk losing your customers when raising the prices.

On the other hand for example, if you have been into the market for a period and you are suddenly reducing pricing in order to increase your market share, then a perception problem will appear, as customers might doubt the quality of the provided product, considering that there might be a quality issue because of the lowered prices. More over, a price war can be declared. Some of your competitors might decide to play the same game as you so at the end of the day you will not earn any market share. Lastly, the most dangerous situation can be that you decide the penetrate with break even pricing, but the cost was not calculated properly or you are unable to sustain break even price, in which case you will have to exit with heavy losses.