Home » Marketing » What is Relative Advantage? Concept, Advantage and Application

E.M. Rogers, who was a sociology professor at Ohio State University, was the first one to identify Relative Advantage in 1962 when he published Diffusion of Innovation. This publication was a result of a large-scale research project that focused on finding out why innovations spread.

Rogers collected the results of more than 500 hundred studies on why innovative ideas were adopted by people and organization. He came up with five product characteristics that influence how consumer’s attitudes are influenced towards a particular product or service. The five product characteristics are Relative Advantage, complexity, compatibility, observability, and trialability.

In this article, we will discuss the first product characteristic, i.e. Relative Advantage.

What is Relative Advantage?

Rogers, in 1962, defined Relative Advantage as the“extent to which customer observe a new product or service as enhanced than its substitute”. Later, in 1993, he gave another definition and said it to be “the degree to which an innovation is perceived as being better than the idea it overtakes”. Mostly used with new products or service, the term relative advantage refers to the degree to which a particular product seems to be superior to another already existing product.

This concept is based on consumer’s perception of the product and service and does not necessarily represent the actual features of the product or service in question. The concept helps businesses to understand whether consumers would actually prefer to use this product or rather remain loyal to the already existing product by a competitor.

The rate of acceptance of a new product or service is directly proportional to the relative advantage of the product, i.e. greater the advantage for that product, greater will be its acceptance by the target consumer and vice versa.

Let us take an example of a person called “A” who is extremely good at cooking and is also excellent as a lawyer. Another person “B” is also pretty good at cooking and average as a lawyer. “A” has an absolute advantage over “B” both as a cook as well as a lawyer. However, when the time comes for “A” to choose a career between being a chef and a lawyer, his opportunity cost to become a chef is higher as he would have to give up his highly lucrative career as a lawyer – which he is extremely good at too. On the other hand, for “B”, the opportunity cost to become a chef is relatively lower, as his law career is average. From the discussions above, we can deduce that “B” has a relative advantage in cooking over “A”, even though “A” is objectively a better cook than “B” is.

Countries, Products, organizations, and individuals can all have Relative advantage of some kind.

Ways to have Relative Advantage 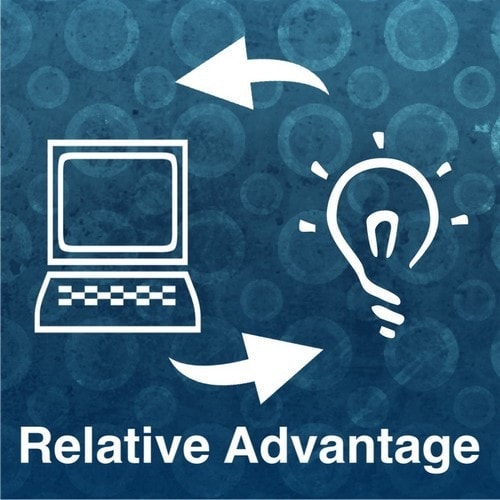 3) Relative advantage can also be created by a product that is perceived to be superior to the consumers. Such products, which though having a high price, command a high market share and have an obvious advantage over its competitors.LED TVs, LCD TVs, and Plasma TVs – though being expensive than CRT TV sets – have an advantage over CRT TV sets.

4) A service that satisfies a customer’s need better than the competition will have a relative advantage. An example here would be a school, in a non-English speaking region, with an excellent English program which will have an advantage over its competitors.

From the above discussion, it is clear that relative advantage exists when a country/organization/ product/ brand/service or individual offers the target consumers either of the following:

Also Read  What Is A Marketing Campaign? Importance and Example

Basically a strength against their competitors, this concept is a common phenomenon. Let us discuss some well-known examples of relative advantage.

This concept plays an important role in the launch of a new product or service and thus finds relevance even after half a decade.