Whenever we talk about the World War II, one of the first things that strike us is the widespread calamity that had struck. There was chaos across countries and it is obvious that war is never a pleasant situation. Thus, World War II was no exception. For those who do not know what is the sleeper effect, you must first understand that who actually first discovered it and how did the process work out. Interestingly, it was understood in 1949.

The discoverer of the sleeper effect are namely, Carl Hovland, Arthur Lumsdaine, and Fred Sheffield. Well, to say the least, this discovery changed the way people perceived things is here to stay. Keep reading ahead to know more and find out how was World War II even involved.

What had happened during the Second World War was that there were many documentaries that were presented before the soldiers of America. Their documentaries were related to one other as well as had individual significance. This is why they are often considered to be a series that has the continuous use. I am sure that now you are curious as to what these documentaries were. Well, these documentaries were actually films that were shown to the American soldiers so that they would be able to get a deeper insight into the fact that why were the US forces even involved in the war at the first place. Thus, they can be called ‘propaganda movies’. The discovery came about when the impact of these propaganda films on the American soldiers was being studied by the renowned names that have been stated earlier.

Now, coming to what the discovered went through. Initially, it was studied that when the soldiers were given the respective information, they did not quite seem to accept it. This is because they had this notion in mind that maybe this data that was being shown to them was not genuine.

Since it was all part of propaganda, it was sensed that the source of this information was not reliable and could have actually been designed in such a manner only so that the soldiers are made to feel more patriotic and perform better. Just as incentives are given to people at the workplace and customers are lured on grounds of an emotional advertisement, the same was felt in this case. This is why the information was dismissed and not paid much heed to.

However, the team let some time pass. After this, it was studied again and the results changed totally. It showed that instead of less acceptance of the information, the soldiers were actually caving in and believing it. This showed that with the passage of time, only the information was remembered and the source was actually forgotten. Thus, this is what came to be known as the sleeper effect.

The basic concept of the sleeper effect 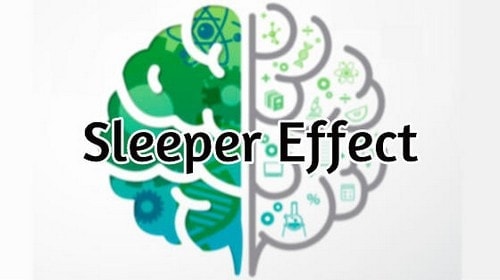 Usually, what happens is that it is a human tendency to immediately accept any information that they are presented with. This is because most of the people are not able to think of the pros and cons to quick and then decide whether this information is accurate at all this is why the first instinct is to accept whatever is said.

This is also due to the influence of factors such as the location of this information and the source from whom this information is being received. It is then over time that we get the opportunity to think deeply about what was said and then after clear evaluation, do we get the chance to reach a conclusion where acceptability and persuasiveness of the information decreases. When the influencing factors are positive, then the message is accepted as genuine and indeed true.

On the contrary, when the cues seem to be negative, then people turn suspicious and are under the impression that they are being fooled or lied to. But, just the reverse of this is known as the sleeper effect. This means that when people initially reject something and later start accepting it after some time has passed by, it is called the sleeper effect. In fact, in the simplest of terms, the sleeper effect can be explained as well as understood as delayed persuasion. Find below the main conditions that must be present for the sleeper effect to work and show its impact.

1) The message needs to be believable

First of all, the message needs to be persuasive. This is possible only when it is believable. No matter what the data is, it must have some relevance and a sequential flow. This is what will make is logical and people will think of accepting it at all. It cannot be something that is too immature or just something from a distant la-la land. It must hold ground in reality that motivates people to pay attention to it, think about it and gradually make way for acceptance that it might be possible.

2) There must be negative cues in the beginning

Secondly. The negative cues need to be present. For example, the negative cue in the World War II instance was that it was a propaganda movie so the soldiers felt that it was not entirely true and that the soldiers were being influenced for better performance. This here implies the unreliable source. These are negative cues which affect the acceptance of information. Another example can be that if we already know someone who tends to lie, then we may reject his or her words at the beginning but later we start believing it after some time.

3) Over time, the negative cues need to be forgotten

Lastly, the negative cues that have just been discussed, start to be forgotten. This means that the source or the location and situation in which the data was received is forgotten and only the substance at hand remains intact. Thus, when you look back and think of it in retrospect, it becomes more acceptable and you stand convinced that it is true.

Can the sleeper effect be forgotten?

Coming to one of the most important queries that have been asked time and again with regard to the sleeper effect is that can it be diminished even if the conditions mentioned above are followed for a while? Well, the answer is simple. Yes, it is possible for the sleeper effect to diminish and lose effect. This happens only when the person is reminded of the source and the situation.

As soon as this happens, even if the information was actually being accepted finally, it is possible that the sleeper effect vanishes completely because the second and third condition will then be negated. It is imperative that all three conditions are always fulfilled. Removal of even one will change the scene. You may feel that how can the subjects forget about the source for good. Well, they do not forget about the source completely. It is just that the association with the source is limited. This is why there is space for doubt but gradually people give in.

Uses of the sleeper effect / Examples of Sleeper Effect 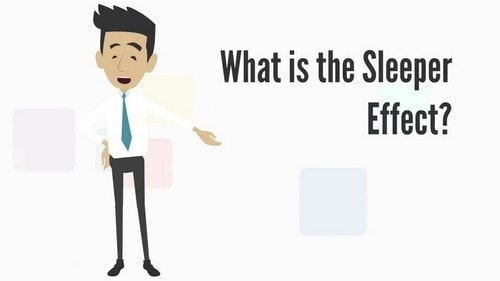 One of the most common uses of the sleeper effect is seen in political campaigns. You must have often seen the leader of one party or the candidate or minister of one party trying to demean the opponent party. This can also be the statement of certain facts which you initially think are not true and are being spoken only because the speech was prepared in a strategic manner. However, after some time has gone by and enough buzz has been created in the media, you too start feeling that the statements were actually true and hold ground. In fact, even if you do not accept all of it, there are many chunks of the data that you do not let go and instead retain it in your long-term memory.

This refers to those people who have either had an abusive exposure in their childhood or seen their parents’ divorce at an early age. These instances may go unnoticed when small and there may not be any visible signs or trauma or mental impact. But as time progresses, people start having issues with forming long-term relations in their present life. This is because what had happened earlier is still lurking somewhere behind their minds. This is what is known as the sleeper effect because initially there was no effect but gradually it has the very detrimental influence on the overall personality.

Illness is very common. There are a number of different diseases that are discovered every day and also spread rapidly. For example, one of the most common issues being detected these days is cancer. Initially, when the causes of cancer were stated, it was not accepted. It was instead felt that people are just spreading such news to affect the world economic market by crashing the purchase of certain goods. But this has now changed when people are actually believing that the consumption of certain things can indeed lead to cancer. In fact, this is also the case with a number of other diseases. Another example will be that of nervous issues.

Marketing is very important for each and company in the world. This is what helps them to reach out to the masses and spread awareness regarding the products and services that they offer to the masses. One such marketing channel is word of mouth. What happens, in this case, is that people use a product and then recommend it to others. It is also possible that if one person does not like the company’s services, then he recommends others to not use it either. Gradually, this word spreads. This is why it is possible the initially if people were not accepting the information due to an uncertain source, they then come to believe it.

5) Reading of facts and news

Lastly, it is common tendency to not just accept news and scientific facts as soon as we read it. This is because initially, we are skeptical whether it is actually true or not. But instead of always actually verifying it, we later just accept it and think that is it true.

Can we overcome the sleeper effect?

Well, it is totally possible to overcome the sleeper effect. This is because all you need to do is verify the data that you receive. This is indeed very simple to do because there are many methods to know the truth now.

Back in the days of the World War II, technology may not have been too advanced. But, this is certainly not the case now when the cyber world has gotten everyone hooked on. This is why all you need to do is search on the world wide web and read up a number of articles so that you get to know various opinions and sides of the same story. That is what will help you weigh the truth that exists behind information and know if it is actually reliable or will remain a hoax forever.

Now that you know all about the sleeper effect, you must also know that it can be great for you if you use it well to use advantage. In fact, it is one of the best policies for companies to start a buzz and then let it sink in. if you want your information to be accepted, then it is recommended that you ensure the information doing the rounds shows that you are positive. Only then will this sleeper effect actually be useful to you. just like a coin has a flip side, the sleeper effect can also have disadvantages that are clearly stated above in the uses.