Home » Marketing » What is a Pyramid Scheme? Meaning and Examples

A business model that recruits members with the promise of payments for recruiting other members in the same scheme is called a pyramid scheme. As more and more members join the scheme, it becomes enormous and quickly impossible because the profit becomes unstable.

These schemes are considered unsustainable and illegal and have existed in many countries for at least a century in different forms. Even some multilevel marketing plans are classified as pyramid schemes.

The pyramid scheme is considered illegal in many states of the United States of America and initiating it would lead to a penalty. These schemes may or may not involve distributorship. The usual trend is to show the sales of products in an attempt to prove its legitimacy.

This is done to avoid the regulatory agencies because many states and countries have a law that prohibits marketing practices in which the earning potential comes from recruiting other participants or investors and not from the sales of the product. In the pyramid schemes selling a product is much less critical than recruiting new investors. Often pyramid schemes are disguised as multilevel marketing projects to dupe customers.

Apart from earning money from your sales, there is also a percentage of income that can be generated by the distributors that you have recruited or brought to this program. These are generally bonuses for setting a specific amount of product or even the joining bonuses of new members which you can earn for signing them up.

How a Pyramid Scheme Works? 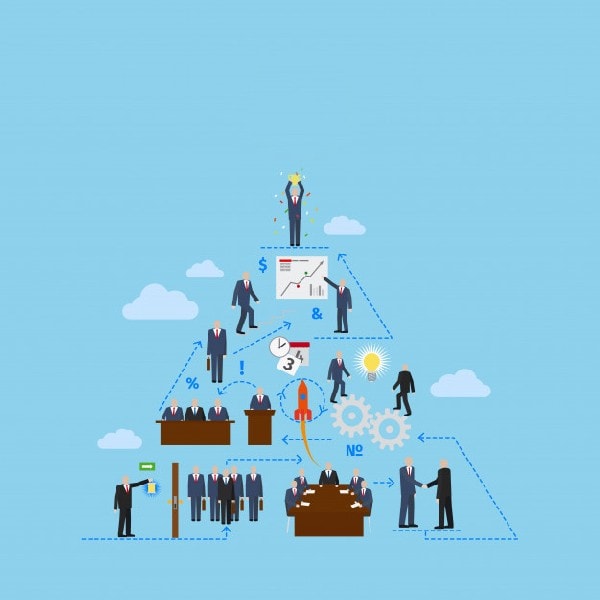 The pyramid scheme starts unsuspectingly like a regular or rather a lucrative business venture. The recruiting process is often initiated by family, friends or neighbors in which the person is given a pitch about how fruitful and profitable is the business deal via telephone or email or by a personal meeting.

Sometimes informal meetings involving all members of the scheme take place so that new people joining the scheme have trust in them. Following are a few of the common steps which are used by every pyramid scheme:

Usually, an individual or a group of individuals who are at the top of the pyramid invest a small amount of money or as in many cases which are observed no money at all. Their idea is to get rich quickly, and they start to charge the other members to join the group. They usually encourage to sell a product or a service which is generally of poor quality or sub-standard and in that process convince others further to join the group.

The scheme is presented as a business proposal that is made to sound lucrative and convincing. Many real-life examples of people are given so that the company can build trust. Enticing awards and recognition are shown so that the participants have no doubts about the scheme. A lot of convincing goes in the first step so that the same is conveyed down when the person is about to recruit another person.

As new investors join the pyramid scheme, the money comes in. This money is used to pay early investors. All the financial accounts are created, and statements are generated. Checks are generated as a cut to investors. Everything goes up at this point, and there is not a single product or service which has been sold with the help of investment.

As the participants increase the flow of money increases. In some schemes, every person joins two other persons who are expected to bring in two more people each. This way, the inflow increases in geometric proportion.

Ultimately it becomes tough to get in new members. When this begins to happen, the money that reaches the investors becomes less. Therefore initial investors get their payment. , is when the earliest investors in the pyramid scheme decide to cash out, and at this point, there is no enough money to pay the rest of the investors who are at the bottom of the pyramid.

There is no money left when the rest of the investors decide to cash out from the bottom of the pyramid. The pyramid scheme starts to collapse under its weight. There are some ways by which the collapse can be prolonged, but it can never be avoided entirely. Eventually, as the cash inflow decreases, people at the bottom start falling out, and the scheme collapses.

How to tell the difference between Pyramid Scheme and a legitimate business?

Pyramid schemes are designed to give the illusion that you earn more money. Multilevel marketing companies, on the other hand, make money as you build your business by selling the products to different people.

It is important to investigate carefully before you sign up for the business. Following are three common questions to be asked or points to be considered before going ahead:

1. Amount of money you are required to pay to join

If the start-up has a substantial cost, then that is the first tipoff that it could be a pyramid scheme. Multilevel marketing companies usually charge a minimal joining fee. These companies want to make it inexpensive and relatively easy so that the participants can start selling. Pyramid schemes make it very costly to join them, which is why the cost to become a participant or a distributor is very high.

Pyramid schemes often disguise their entry fees as a part of mandatory training, mandatory products to start with, computer services or any such technical thing which would make it compulsory for you to pay the fees and buy it.

They may be inexpensive, but they make it mandatory to buy so that you can take full advantage of the opportunity or that is what they tell you.

Multilevel marketing companies always offer to buy back the unsold products in case you decide to leave the business. On the other hand, pyramid schemes will never buy back their products at any cost.

This would be an indicator that something is fishy because of multi-level marketing companies by back the unsold products, even if at a lesser value.

3. Are companies products sold to customers?

If the answer to this question is no, then that is your ultimate tipoff to stay away from the disguised pyramid scheme. Multilevel marketing depends entirely on customers to establish the market by selling their products.

The products are of good quality and are competitively priced. Pyramid schemes are not concerned with the turnover of the products, but they are concerned about the profits that the new recruiters make by making other new recruiters join.

Sometimes pyramid schemes are much more sophisticated than a regular model. Recruiting many people under the pretense and disguise of a business can be difficult sometimes in regular models, that is why they ask that each person must hire two other people. In this model, the money is flowing doubles up the risk decreases. Every member recruits two more members and those two members recruit further two members each and so on.

Previously the scheme was known as airplane game, and the four levels are captain, co-pilot, crew, and passengers which explain different levels of each person. In another case, it was labeled as a Dinner party in which the different levels were labeled as salad, main course, dessert, and appetizer. Why is the desert occupied the top position the salad and appetizer held the bottom places. These schemes were to reduce the negativity associated with pyramid schemes.

Whichever is the name used, but in general, there are 15 people employed in four different levels that are 1+2+4+8. The people joining at the bottom are remaining people or passengers. These people have to pay and assured the sum of joining the scheme. The person who enters the scheme will never see a return until he gets the other two people. It is the participants in the bottom three layers who lose money if the scheme collapses.

If this scheme is proposed as a business model, then the majority of the money would be taken by the confident trickster. They would fill the first three layers immediately below him, with different phony names so that they get the early seven payouts without paying any money. The captain is the person sitting on the top of the tree which, after receiving the payment from eight passengers, can leave the scheme. He can re-enter the pyramid as a passenger and recruit more people, hopefully reaching the captain levels again. This increases the second payout cycle.