In general advertising with banners and pamphlets, it is quite difficult to understand in advance that which strategy will work great and hence it may incur an investment of the huge amount of money. The digital strategies such as the Facebook ads have provided the options to test the ads before so that the best one can be represented.

Also, there was a time when the head of the department used to dominate and his or her chosen designs used to be the one to be used. It is not sure whether it will come up with fruitful results or not. Now with the Facebook adoptions, there are options where multiple choices are provided to be displayed first for testing and the one that is performing the best is used further also.

A/B testing or also known as split testing is responsible for this particular strategy.

What Do You Mean By A/B Testing? 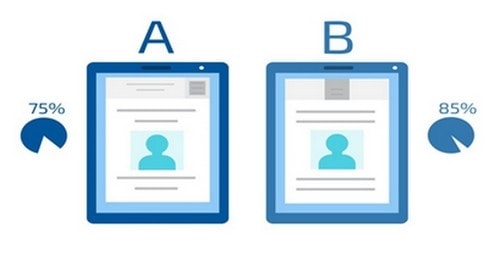 A/B testing of split testing is a technique through which a combination of best variants is found that can be helpful in attracting traffic.

This is done comparing two different versions of ads based on a number of demographics of the traffic so that the best performing ad can be displayed in front of the audiences.

Normally, the testing requires a time period of 2 weeks to be completed.

After the test has been successfully completed, an analytical result is updated in the AD Manager as well as is sent in your email. This helps you in understanding the result of the test ad and also the winner in the test.

You do not have to worry about the authenticity of the measures because it is done with the help of the statistical calculations. Hence, you can test multiple ad variations and can present them in front of different audiences based on demographics and can find out which adoption is best for the which audience group. 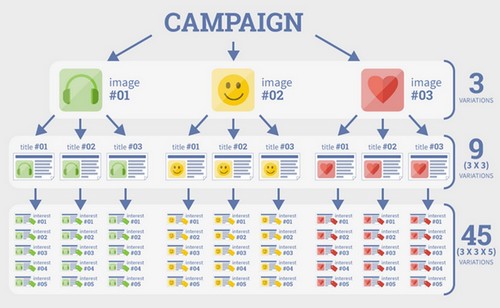 When going for the testing, it has been often advised to test with one or two variables at a time.

Selecting a high number of variables will not only take a good amount of time to get the test completed, and also the data achieved will be so much confusion that you will have intense difficulty in understanding it.

But there are at times when you may have to make use of more than five variables. This can happen by the time your business has grown to a much higher level.

This is the time when you are also able to invest a good amount of budget for the testing purpose. In such a situation, a great thing that can be done is to take help from an external Facebook tool.

If you are ready to spend as much as $2000 each month for the testing campaign, making use of options such as AdEspresso is a great idea. It is said that taking a smart move such as this can help you in saving your time as well as your money in a huge way.

If you are willing to do the testing with multiple variables, one of the best ways is to make use of the option AdEspresso.

This is the most common reason why today a huge number of people worldwide are making use of this particular tool.

There are two different ways of creating a split test on AdEspresso.

The first one is all about driving traffic to your traffic. For this, you need to select the promotion option of ‘External Website’. 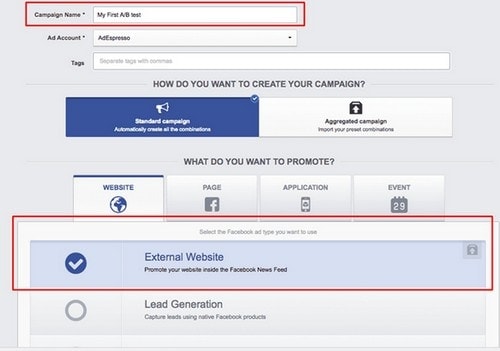 You need to select ‘Standard’ ad campaign here. Here all the ad versions will be generated automatically. The creation of the versions for the split test is based on the elements that you must have selected.

In the second option that is known as the ‘Aggregate’ ad campaign, you need to upload a spreadsheet in which you have already preset combinations for the test.

The standard campaign is mostly used and hence talking about it is the best here.

In the next phase of the method, various variations such as headlines, images, or many others are added. AdEspresso will create every possible ad variations depending upon these elements.

After the addition of the elements, you need to click on the ‘Proceed’ button.

Now, you will be provided with the option to select audiences. Here, either you can select the right audience group or can also split test the audience.

After completing this procedure, just before you are landed to the page of bidding and scheduling, AdEspresso comes up with many other options in front of you.

After going through all the options and using whatever is necessary, you just need to click on ‘Publish on Facebook’. Now you need to wait for the results to come after the number of days that you have selected for the campaign.

Grid Composer is another new feature that has come up in the year 2018 for A/B testing method. Here, we can make use of the ‘Aggregate’ option in place of the ‘Standard’ option. 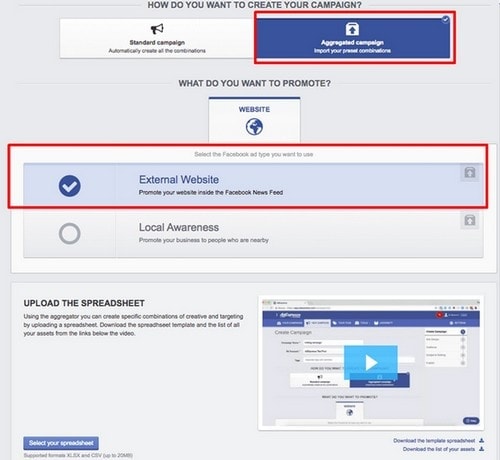 Once the option is selected, there will be an option provided to select a spreadsheet.

Also, AdEspresso provides a downloadable template that can be customized to put the details that you have.

After completion of the customization, you just need to upload it back and the combinations will start getting created for the campaign. If in the midway, any of the elements is left out, it can be filled in during the campaign too.

If creating a spreadsheet is not your cup of tea, AdEspresso also comes up with another option and this is the use of Ad templates that you can get in the Asset Manager. It is available in the Tool Box, where you need to click on ‘Create a new asset’ option.

There will be a pop up that will offer you with a number of varieties such as lead ad, link ad, mobile ad, and many others among which you need to chose the right one.

If the link ad is selected, again a popup is come up where you will be asked to select from different elements such as headline, creative, and many others. After selection of the elements, you just need to save it and the template will be ready for the campaign.

Next will the option of ‘test ad templates’. From here the test campaign can be started.

The elements of the split testing is the most important to take care of if you wish to have a fair result.

Depending upon the elements, the tool creates different variations of the ads so that they can be provided for the test. It is important to choose the right elements so that the right kind of variations can be created and the test can be successfully conducted.

Though these are some of the common elements that are quite often selected by many people for the test, the elements to be chosen is highly dependent on the goal of the test.

There are various times when many customized creative elements are also used for the test of ads that are different and unique than the rest.

It is possible to know this through the A/B test option today. Make use of the right tools such as that of AdEspresso and you will be able to conduct tests with multiple variables.

Conducting the A/B testing can help you in a wide way to get a result of which ad will be perfect for the campaign. The tool AdEspresso will help you in selecting the right elements and will also provide you with a range of options as per which you will be able to conduct a perfect test.

When the test is conducted correctly, you will surely get the right results as per which you can run your marketing campaigns successfully on Facebook.