Home » Marketing » What are Public Goods? Characteristics and Aspects

Almost half of the total social benefit of the newly produced products benefits both society and the investors and producers. Only a scenario where these positive externalities benefit the society at large, but not the private investors revolves around public goods.

Access to clean air, national defense, drinking water availability, the rule of law, sanitation, law enforcement, etc., are examples of public goods. Such commodities or services are offered to all the members of society.

What are Public Goods?

A normal private good, for example, like a plate of burgers, can be easily bought and sold as an independent and identifiable good. Similar is not the case with Public Goods.

These are the goods produced under the control and administration of a central authority, unlike private producers.

In economic terms, public goods are those that are accessible to all the members of society. These goods are collectively paid for by the taxation system that is in place, adopted by the government. 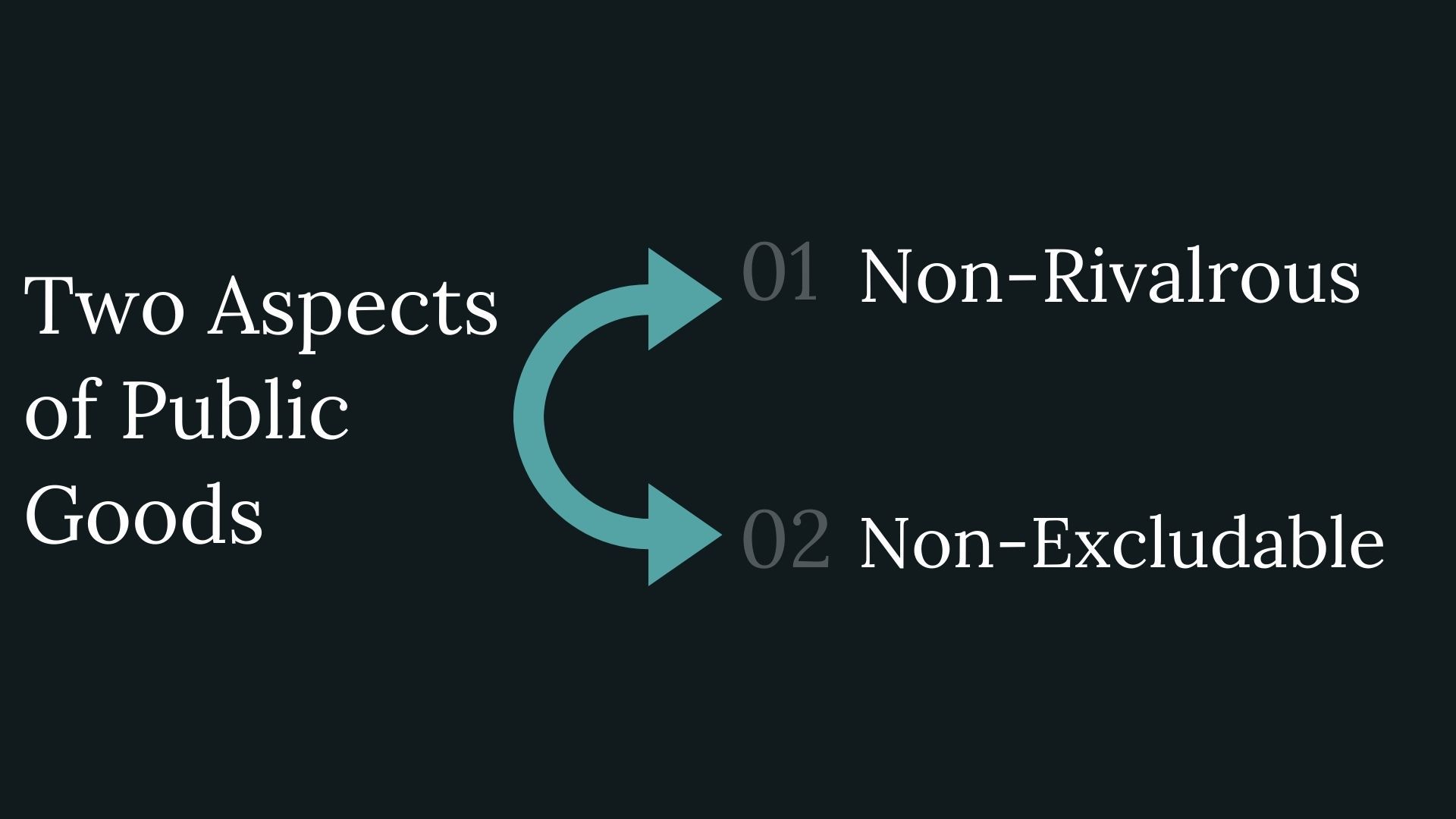 Public goods are defined with the help of two main characteristics: they are non-rivalrous and non-excludable.

Non-excludability is the cost of letting the non-payers of tax enjoy the benefit of the good or service being provided. This cost is usually prohibitive. For example, if a fireworks show is scheduled in a colony, people will watch it from their balconies.

In this case, the firework owner cannot charge a fee from those people, and thus even when the demand for the good is high, the benefit to the owner himself is very low.

This throws light on one of the most critical issues concerning the concept of public goods. This is the ‘free-rider’ problem.

If not solved, this problem can lead to valuable goods and services being unproduced, as only a small population might be willing to pay for it.

The second aspect of the public good is the idea of ‘non-rivalrous’ consumption attached to it.

Even if the producer or the entrepreneur manages to exclude the free riders from consuming the produced goods or services is unrivaled.

In such cases, if someone enjoys the benefits from a good, it will not reduce benefits for the others.  For instance, erecting a dam in an area will protect everyone from the floods.

Non-excludability is usually considered the more important of the two aspects of public goods.

If the good is excludable, private entrepreneurs will try to serve as many fee-paying customers as possible, charging lower prices to some customers if need be. This implies that if one person who is non-excludable uses the good or service, other people will similarly have access to it.

A lot of government services can be potential examples of public goods. There are people in a society or a setting that pays taxes regularly, fire control, police service, or national defense. But it would be difficult for the authorities to protect only those people from a potential threat to their security like a fire breakout or a burglary.

Also Read  What is B2B Lead Generation? Tools and Services

A protection drive shall undoubtedly be aiming at protecting all individuals, irrespective of the tax payment.

However, all goods and services that produce positive externality might not compulsorily be a public good. The government’s investment in education facilities in the country has tremendous positive effects on society’s general fabric. Although private companies invest in these societal causes, it might not be a large scale to cater to all the individuals collectively.

Solutions to the problems of Public Goods

One of the most viable and potential solutions to the problem arising out of public goods and their consumption is the inculcation of ‘reciprocity motive.’ It is extremely useful, especially in smaller groups of people. Reciprocity in the sense that, developing to contribute to a cooperative individual or an agency aiming at public welfare and wants to implant goodness in the society.

Another potential solution to these problems can be that of defining clearly what property rights are. For example, an activity aimed at collective good like cleaning a polluted river can include a free-rider problem if there is a single lake owner. In the case of a single owner, he can charge a fee from fishermen, boaters, or people using it for recreation and other lake beneficiaries.

Contractual Agreements are also used as a potential solution to public goods’ problems and the externalities they create. The free-rider issues that come with it can be solved by having these contractual agreements in place.

For example, a firm might take up research and development activities for a particular good or service. If that practice benefits the other industries or firms in a similar niche, the host firm can pool resources from them and ask them to join the project in the form of an agreement. Here, every firm shall play its part and bear its cost and share the benefits of the research in the end.

Also Read  What is Opportunity Cost? Meaning, Examples and Calculations

All in all, the imperfections and flaws that come with public-goods should be studied with the government’s fallacies and its functioning.

The government usually has a weak incentive to provide services to the citizens who are generally the consumers of these public goods. The production is thus inefficient but can be corrected if responsibility is realized on both ends.

What are your thoughts about the role of government and firms in channelizing public goods?