Creative advertising is one of the most powerful weapons in your marketing arsenal that penetrates the target-audience base and converts potential customers into loyal customers.

Any business is set up with the motive of gaining maximum profit. The pillars of a successful business are supportive clients, efficient employees, and perfect marketing. Marketing is the way of understanding exchange relationships and working on optimizing them. Every company has some product or service to offer to its clients and customers. 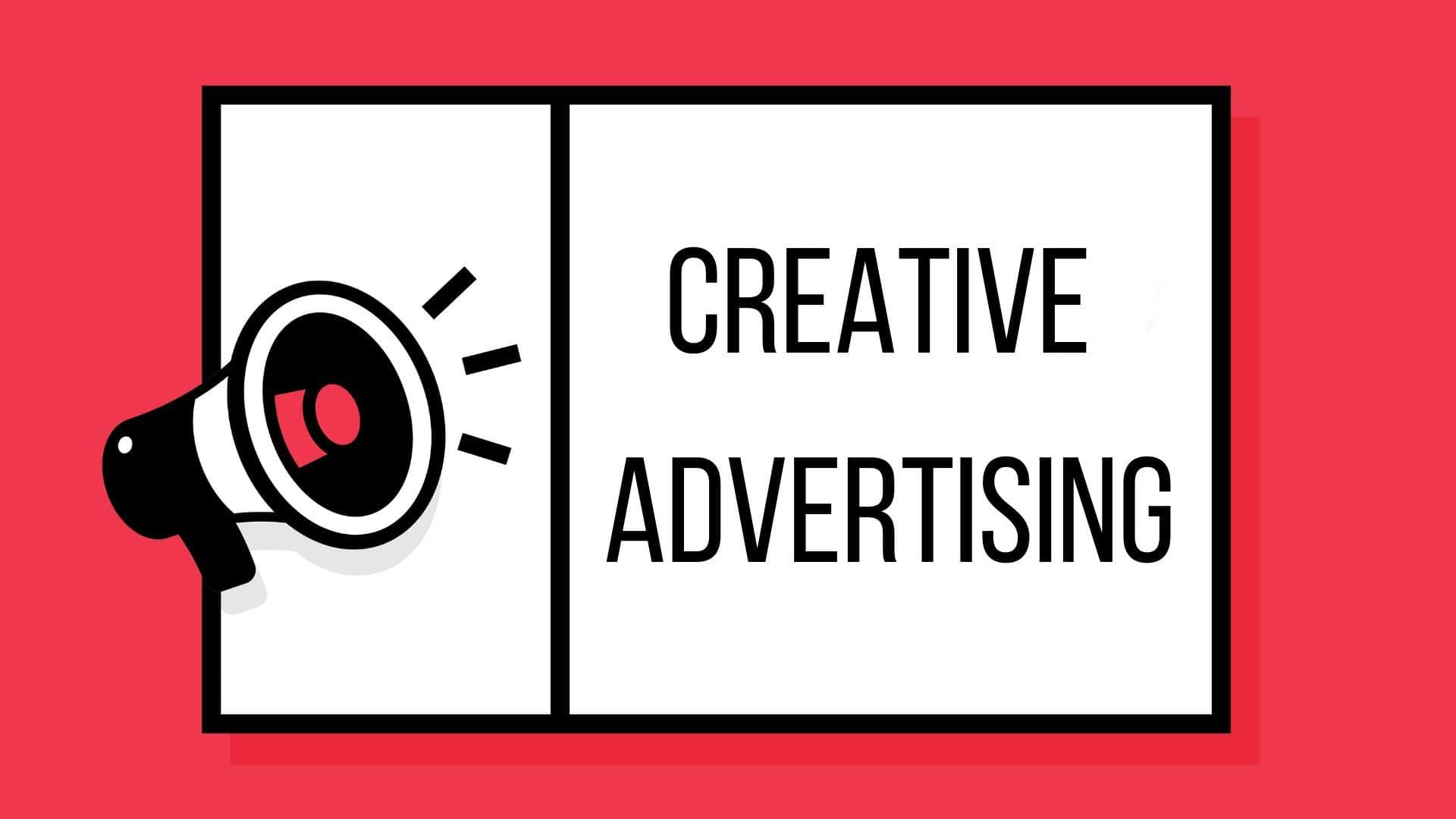 However, without proper advertising, the positive points and features of these services and products may not reach the clients. That is why marketing holds immense importance in devising the best of business policies.

The outcomes of the business should satisfy the needs and expectations of the clients. This study of studying, analyzing, and anticipating the needs of customers can be defined as advertising.

It is the art of circulating promotional messages for a company or a product that will increase its reach and influence. In this post, we will dive deep into the world of creative advertising, and learn from some of the best creative ads-

What is Creative Advertising? 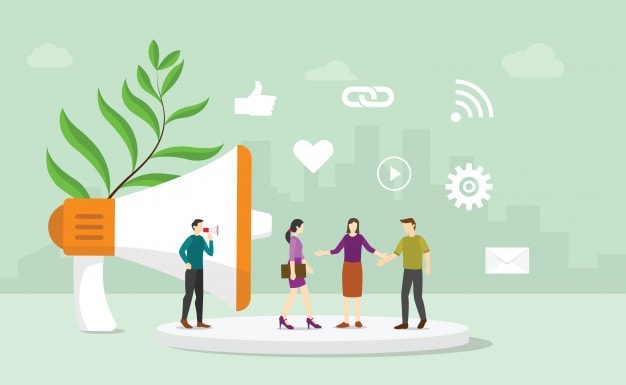 Creativity is the art of creating something new.

It is the art of innovating something and giving life and wings to the imagination.

Creativity has applications everywhere. Right from simple daily activities to developing business strategies, real creativity is needed everywhere. Even the domain of advertising is not an exception to this never-ending demand for creativity. Creativity is a continuous process.

Advertisements can be drafted to conquer the heads and hearts of the onlookers creatively.

Even the greatest of people in business say that the most crucial aspect of a successful business is creative advertising. There is a direct proportion between the creativity in ads and the sales and profits gained by the company.

It is because creativity enhances the happiness and joy you get after watching an advertisement. Also, at times, it sets your mind thinking about various aspects of the ad. 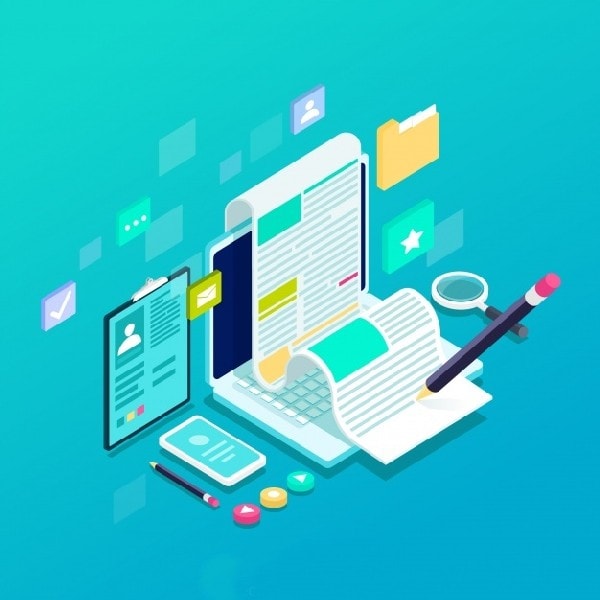 Creative ads have some basic features which need to be incorporated in them to make them creatively appealing to the viewers. Some of those features are listed below.

Originality is a crucial factor in creativity. Your creativity comes from within you and not from someone else. Hence, anything that is original and which belongs to you denotes your creative perspective. In advertisements as well, originality and uniqueness have their voices.

The ideas incorporated in the ads need to be unique and not repetitive. There can be newer visual details or original captions and taglines that would attract the viewers. In the case of video ads, there can be new stories, new faces, and new scenes of stories, which will add a hint of creativity.

2. Elaboration of the concept

Once the basic idea of the ad is finalized, illustration is the next important step.

Elaboration can be of two types; it can either add an unexpected twist to the story or elevate it to an altogether new level. The elaboration details awaken the interest of the viewers and make them invest in the company’s product. However, one should take care that the details are not dull or bulky.

There should be crispiness and freshness in these details. Elaboration done without a just cause and track can be mundane and will rather ruin the advertisement than bettering it in any way. It’s a crucial point.

3. The flexibility of ideas

Flexibility means the virtue by which one thing can easily mould itself into several different forms. We live in a hugely diverse world. There are people of different mindsets, ideologies, and thinking patterns. If you want to launch and sustain your product or service in the global markets, you need to cater to every brain and thinking.

It can be done if you impart flexibility to your ads. The stories of the advertisements should be drafted in a way that appeals to most of the people watching it. It stands as the fact that no idea can appeal to every single being in the world. But, you can decide your target audience and work on meeting their expectations. You can put your creativity to test in such cases.

4. Synthesis of the advertisement

The synthesis of a story is its development and the relationships between various characters and objects in the story. In every ad, there is an adequately spun story that speaks about the product or the service it is offering. The characters in the story should be relatable. The incidents should be believable and not seem out of the world.

The words spoken by the characters or the message delivered by the ad should not be out of place. All of these factors should be in synchronization with each other. Only then, the ad, as a whole, will appeal to the viewers.

The appearance of the advertisement plays a crucial role in its success. In this, there are three main aspects, namely visual, verbal, and music. The visual appeal is very vital. The colours used in the ad, the type of palette of shades and undertones, the clothes worn by the characters forms the visual appeal. The music and the songs of the advertisements are also essential.

These tunes stay with the audience forever. People go on humming these tunes and enjoy them to the fullest. Next and the most crucial point is the verbal aspect of an advertisement. The dialogues are spoken by the characters and the way they are expressed to the advertisement’s conviction. Also, here comes the most exciting part of an ad which is the tagline.

A tagline is a group of words that represent the product in its entirety. It can speak about the values and uses of the product. There are examples of times when these taglines have broken records of popularity and contributed in a humongous way to the product’s success. Hence, artistic values are also crucial in maintaining the creativity of an advertisement.

Honestly speaking, there is nothing good or bad about creativity. If you can create something new, that is your victory. When it comes to advertisements, you can judge the creativity of it based on factors like its popularity, flexibility, and artistic value. Here are some of the most creative ads which will leave you amazed. 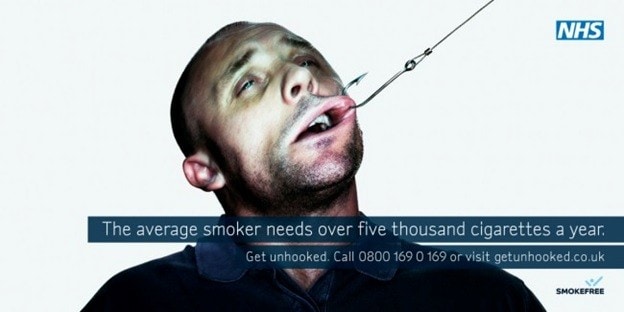 The NHS (National Health Service) of the UK has always strived to bring out the most creative ads to inspire people to live a healthier life. It is no news that addictions of any sort are harmful to your health.
Severe habits like smoking and alcoholism can also prove to be fatal. Hence, the NHS came up with an ad promoting no smoking.

It showed a man with a fish hook on his mouth. It represented that smoking will kill you the way fish is killed when taken out of the water using the fishhook. 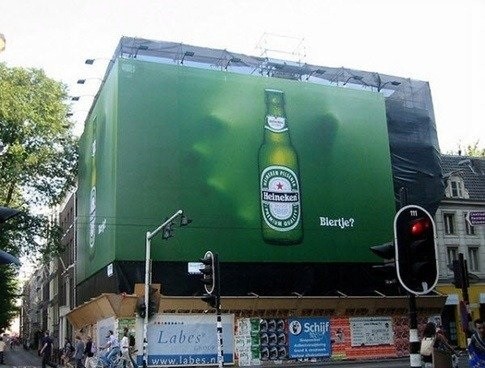 Heineken is a leading brand of cold drinks and soda. Despite so many cold-drinks and soft-drinks in the market, Heineken has managed to attract people due to its creative advertisements.

It has put up printed ads in the form of hoardings on the streets of prominent cities. These hoardings have a 3D picture of the bottle. It is designed so beautifully that one is prompted to grab it until he/she realizes that it is just a picture.

It makes the viewers buy the bottle for themselves, thus increasing the sales of this product. 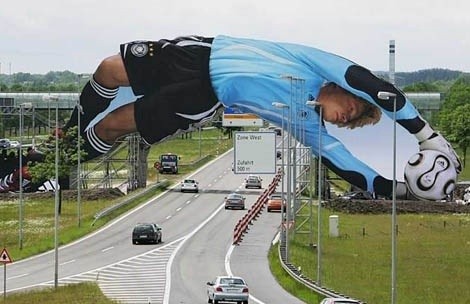 Adidas is a leading brand of sports apparel and sports equipment. They have come up with brilliant ads for many years. But, the larger than life ad near the Munich airport is one of its kinds. Often huge ads become gaudy and bulky.

But, this ad is of a footballer in a sprinting position. It covers the whole width of the highway and justifies its size. It is creativity amplified to another level. It attracted viewers coming especially to see the ad and gained huge media acclaim. 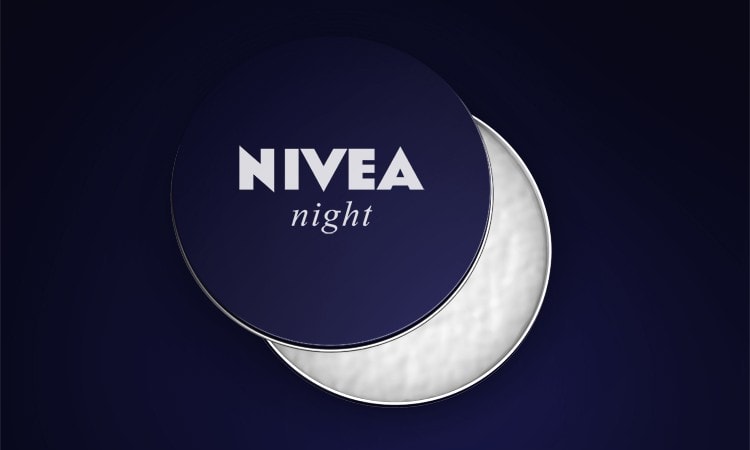 Nivea is one of the most popular and best brands producing various kinds of skin creams. They have creams for day and night uses. Their advertisement of the Nivea Night Cream is an ode to beauty in simplicity.

It has no caption, no tagline, and no characters. There is nothing but the original product. The pack of the cream which is in dark blue has the cream of white colour inside it.

The ad features the pack opened slightly, which looks like the moon’s crescent in the night sky shown by the dark blue background. This is an example of simplifying creativity to the extent that it becomes an epitome of innovation. 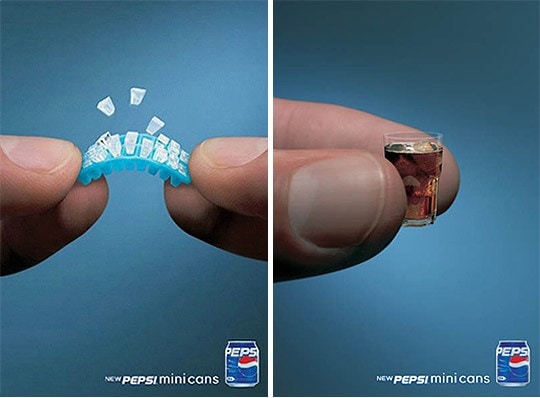 Pepsi has come up with different creative ad strategies that have been an instant hit with their target audiences. They opted for various innovative ideas based upon their product and target niche, which enabled them to optimize their success ratio. 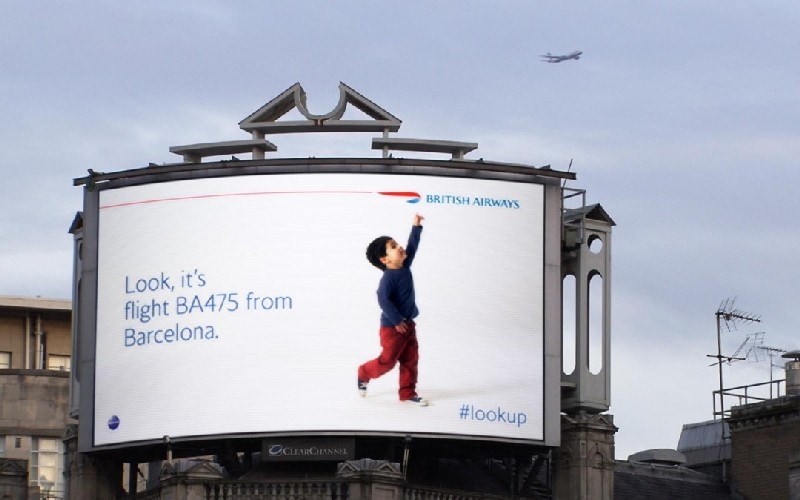 With changing market dynamics, new strategies are used by companies.

British Airways used one such creative advertising with their electronic ad that updated you about the plane which is flying overhead. It was as unique as engaging also and played a crucial role in pulling in more audiences. 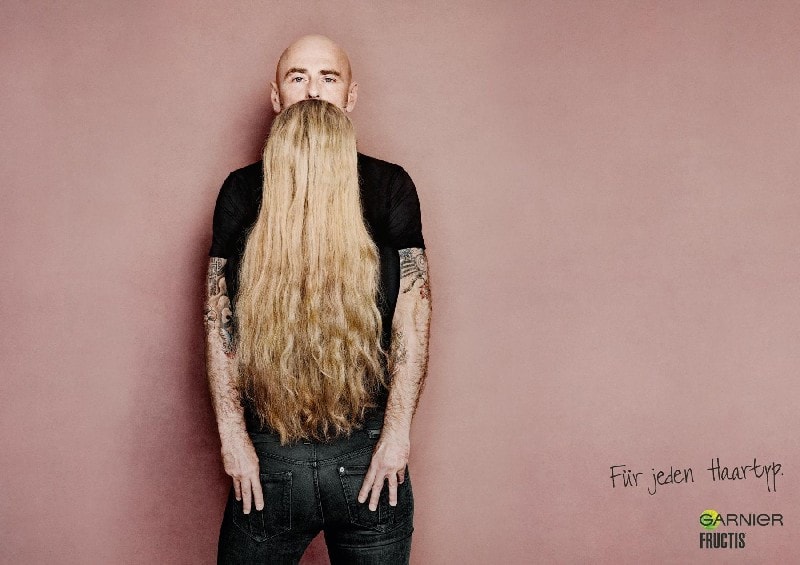 Garnier came up with a visually appealing and enticing campaign for its hair product.

The Ad copy has a Swiss caption that says “for any hair type.” The ad image was so powerful and fresh in depicting this via its optical illusion that you will not be able to avoid using your creative senses while analyzing the pic.

In this creative ad, you can see what out-of-the-box advertising is.

The ad adeptly utilized the natural surroundings of the place where the ad is placed. They used the existing telephone wires as an integral part of their ad image by interestingly, creatively, and relevantly incorporating them in the ad image. 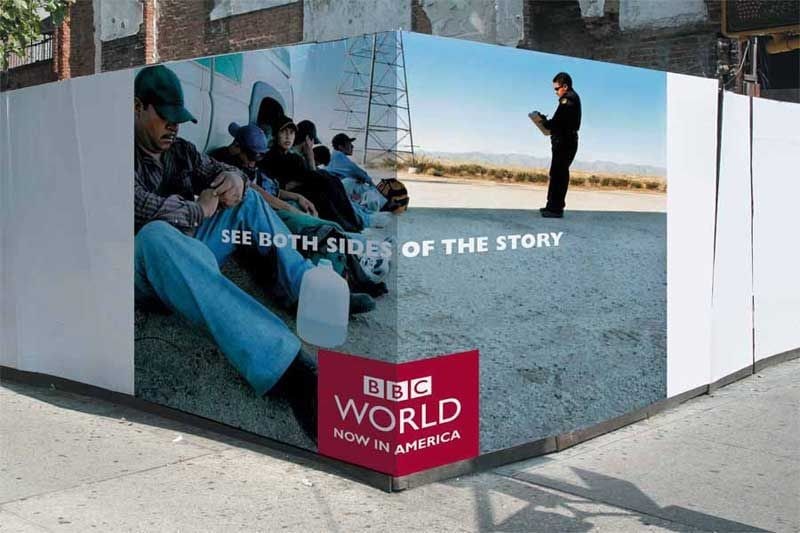 If we talk about one thing in life that can empower us to have a better understanding of different situations, people, and choices in our lives, then it is nothing but understanding different perceptions. BBC world came up with one such creative ad that adeptly demonstrated two sides of a story.

Advertisements are essential for any business. If you wish to make your business successful, you should have the backbone of a strong marketing team.

If the marketing team designs the advertisements brilliantly putting in all of their creative capabilities, there is no doubt that the ads will become memorable and worthwhile like the ones mentioned above.

What is your favourite creative advertising campaign?