Home » MANAGEMENT » The Theory of Bureaucratic Management by Max Weber

A famous German sociologist, Max Weber, was the first one who used and described the meaning of Bureaucracy which later on became famous as the bureaucratic theory of management or the Max Weber theory. He was of the opinion that bureaucracy was the most efficient way to establish an organization, administration, and corporations.

Max Weber saw it as a far better solution for structuring than the traditional ones. In a bureaucracy, everyone is treated equal and the division of labor is clearly described for each employee.

Before we further deep dive into this theory by Max Weber, let us take a look at the meaning and definition of bureaucracy – Bureaucracy is an organizational structure that is characterized by many rules, standardized processes, procedures and requirements, number of desks, a meticulous division of labor and responsibility, clear hierarchies and professional, almost impersonal interactions between employees.

According to the Max Weber’s bureaucratic theory, this kind of a structure was essential in large organizations so that all the tasks can be structurally performed by a huge number of work population. Also, in a bureaucracy, selection and promotion only occur on the basis of technical qualifications. According to Max Weber, bureaucratic management approach stressed upon the requirement of organizations to function in a balanced way instead of following the arbitrary whims or absurd emotions and intentions of management and supervisors.

The main principles and features on which this approach is based can be seen as below:-

The above features are what makes the bureaucratic management the way it is. It gives much importance to the division of appropriate power and responsibilities which should be handled with the help of a chain of command. This chain of command should be constructed in such a way that information can be enabled to flow efficiently and effectively. The theory also gives importance to the ownership of assets of the organization and keeps its view that the assets of the organization and the owner are separate. Under no circumstances, these can be treated as same. A very important point is the basis of recruitment and further growth in the organization. According to Weber, this should purely be based upon qualifications and merit.

If we go by the word, the term bureaucracy has a negative undertone and is regularly connected to government offices and substantial associations. However, the immense advantage of a bureaucracy is that large corporations with numerous various leveled layers can actually become organized and work viably because of this.

It is unequivocally the built-up principles and methodology that makes it possible to have high productivity and reliable execution of work by all stakeholders. This makes it less demanding for administration to keep up control and make changes when vital. Bureaucracy is particularly inescapable in corporations where enactment has an essential part in resulting in a consistent outcome. 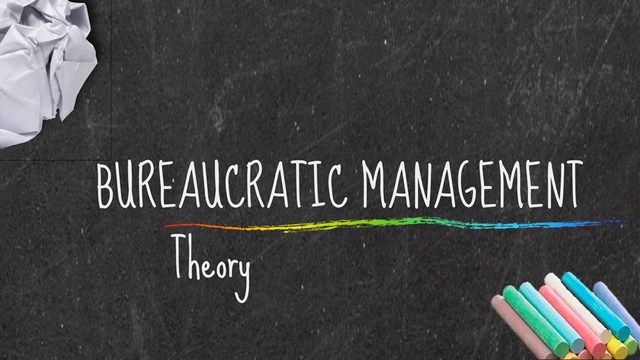 Though it makes easy for management to keep a check and control in big organizations yet there are certain disadvantages and problems which are associated with the bureaucracy. Bureaucracy is portrayed by a lot of formality, paperwork, numerous work areas, certain office culture, and laid back correspondence because of its numerous various layers.

This is the framework’s greatest burden. It is additionally painful that workers remain decently distant from each other and the organization, making them less faithful. Bureaucracy is added to a great degree reliant on administrative and strategy consistency. This limits workers to think of inventive thoughts, influencing them to feel like only a number rather than a person. Many types of research exhibited that employees acknowledge consideration and need to have a voice in basic leadership.

Since people have no chance to voice their supposition or impact basic leadership, a bureaucratic organization may demotivate workers over the long haul. Also, over a period of time, workers may begin to get irritated at the different principles and prerequisites, with the hazard that they may begin boycotting as well as mishandling these standards and taking stands against the protocols. It is, therefore, vital that bureaucratic associations legitimately illuminate employees well ahead of time on their way to deal with work and expects them to acknowledge this. The people who agree to work being in this approach are suitable to work inside a bureaucratic association.

Max Weber’s bureaucratic management approach tried to give a solution to problems of old-fashioned systems of organizations. But, as we can see from above discussion, it is not the perfect or close to the perfect solution.