Before the commencement of the first World War, imperialism had reached its zenith and there was a high focus on increasing economic efficiency from existing resources as new colonies were hard to find.

Most of the colonies had been subjugated to control by some European power and the tussle to wrest territories from one another led to the commencement of two world wars and thereafter restrictions were imposed on the free flow of men and materials from one part of the globe to another. Business owners realized that they had to do more with less in order to succeed.

Running faster to stay in the same place

This was the typical predicament that business owners found themselves in while negotiating the problems of slow growth as demand dipped due to competition.  Greater success could now be obtained only through higher efficiency and more dedication from employees and to enable this principle like the scientific management theories were implemented. It called for a heavy-handed top-down approach wherein feedback from the lower levels to the upper echelons of the management was minimal and information flow was usually from top to bottom.

How Scientific management theory gained momentum with the passage of time! 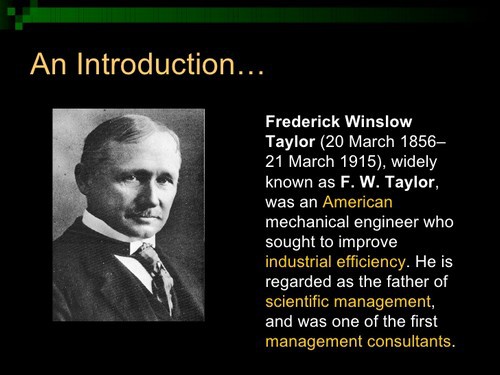 When Frederick Taylor, first introduced this theory, it was termed as shop management or process management. He introduced this theory as he was appalled to see his colleagues deliver less than one-third of their actual potential each day with an amazing sense of regularity. And he set about correcting this anomaly by proposing micro-motion studies using stop-motion cameras to standardize processes.

The principles outlined in the theory were first applied to factories and later on, they were applied to the development of industrial psychology. Other leading lights who worked on refining the theory included Frank .B. Gilbreth (1868-1924) and Harrington Emerson (1853-1931). Most of them advocated that public sector organizations could save big in terms of time, money, and resources by employing the principles outlined in the theory.

Frederick Winslow Taylor is considered as the father of this theory and him along with many other management gurus outlined four basic tenets took shape.

Each of these tenets had to be adhered to strictly in order to achieve the goals of the organization.

These studies were undertaken in order to determine the best way of doing work.

This theory proved very useful as certain industries where each product had to be produced identically to the next one and that too in double-quick time. Stop motion cameras studied the time taken ideally to produce a single unit of the product and the time taken was adjusted against any stoppages due to power failure, bad weather, and the ideal time to complete the task was communicated to the entire enterprise as the ideal standard to complete the job.

As a cultural touchstone, the aspect has still remained intact as top companies have the most challenging recruitment processes. Utmost care is taken by the best companies to choose resources that have the potential to last the test of time and market. It is these resources that prove to deliver winning solutions that can outsmart and outfox competition.

This theory had a profound impact on business discourse in the post-world war 1 era. Those were the days before the great economic depression of 1929 when countries like America were experiencing high economic growth due to free trade.

Yes, some critics of the theory did refer to it as the scientific system of sweating as it applied perfectly to manufacturing, mining industries where blue-collar work was more prevalent as compared to the pink collar and white-collar jobs.

Conversion of craft production to mass production coupled with knowledge transfer between workers and subsequent decantation of this knowledge into tools, processes, and documentation. By following this method, the organization can get a fair idea of its abilities as the competency of each employee can be mapped by knowing the amount of organization-specific knowledge transferred to him or her.