Home » Marketing » Sales » What is BATNA? Best Alternative To a Negotiated Agreement

Abbreviated as BATNA, it is elaborated as Best Alternative To a Negotiated Agreement. It was first explained in their book “Getting to Yes: Negotiating Without Giving In” by authors Roger Fisher and William Ury. In other words, it is the best available alternative that you are bound to follow since the negotiated agreement is not in anyone’s favor or since you do not agree with the agreement.

It is not necessarily something that someone looks forward to in a negotiation but it can be used as a last resource. Ideally, BATNA should be avoided as much as possible and nobody aims to end the negotiations with BATNA and for that, it is the responsibility of both parties to ensure that their sides are conveyed properly in the process.

If you realize that your BATNA has a leverage over them, you can negotiate toughly during entire session realizing that the opposite party will do everything possible in their hands to avoid BATNA.

Consider you have a fairly good BATNA in your hand, there can be three rejections which you can give in order to have a leverage: 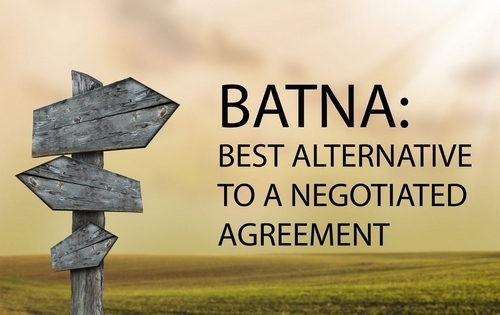 Having a BATNA increases your negotiating power and brings to a consensus which is more in favor of the party holding BATNA. Since its usually the last resort, the other party involved has to accept the BATNA presented or lose the negotiation.

Knowing that you have prepared BATNA, you can be persistent and assertive about your facts since BATNA is an added leverage. This does not mean that you can bully the other party. It is not advisable to consider everything suitable for you since you are here for a negotiation and not heckling.

If you don’t have a BATNA, the other party can present any options which may not be suitable to you but beneficial to them and in that case, however incorrect those options may be, you have to accept. This would be the worst case scenario and another party may bully you into accepting the solution.

Having a BATNA can be a leverage, an escape plan, and the last resort.

There are two categories of negotiators. Hard and Soft negotiators. While the earlier ones almost bully into getting their way, whatever the case may be, the latter ones are easy victims and usually lose the negotiation. If the hard ones meet soft ones in a negotiation, it would be unfair on soft one’s part since it would be obvious that hard negotiators will win. Having a BATNA, in case you turn out to be a soft one, presents a chance to win.

BATNA process – How to determine your BATNA?

Although the BATNA may differ from situation to situation, here are few steps to determine BATNA:

1) Enlist actions that you would undertake, if the negotiation does not go in your favor or if it fails. The positive as well as negative actions that you would undertake in order to convey your dismay to the opposite party. It can be getting court involvement, strikes, making a new or breaking the existing association or any such action points which would prove your leverage, add weight and assert your dominance. This step is only about enlisting, however improbable or impossible the steps may seem, the sifting part comes later

2) Focus upon and improve the most possible ideas and convert them into executable options. Remove the rest of the ideas and focus on the shortlisted ones. Develop them practically and check their implications. For example, if you choose court involvement, you have to check the availability of the lawyer, expenses for the court, the presence of documents etc. List out all the necessary steps to be executed in order to carry that shortlisted idea.

3) Finally, choose one which is best. For example, if you enlist court and strikes but find out that there is a festival around the corner and both options would be redundant, you have to think about next one like making a new alliance. Strikeout such practically impossible and select one. It is very important that selection should be of only one and not multiple.

Consider there are two persons A and B. A wants to sell his old iPhone X to person B who wants to buy iPhone X. Person A offers his iPhone X for $600 to person B. Person B then browses through eBay and finds exactly same iPhone for $500. So BATNA of person B is $500. Now person B will show that to person A and try to get his phone for $450. In that case, A can choose either of the two: a. He can deal with another person C who is willing to buy his iPhone for $550 or b. He can use that as his BATNA to bring up the price offered by person B and settle for $525.

8 Types of BATNA you can use :

Here is the possible list of BATNA’s you can use :