Negotiation is an integral part of every business irrespective of the field and the industry in which the business is incorporated. A properly planned negotiation will consider both the aspects and perspectives of the participating parties and come to a conclusion which will be suitable for all the participating parties. Negotiation is an everyday process for a sales team of an organization in which they have to negotiate with customers regarding the purchase of products or services.

Understanding negotiation involves learning six steps, which are common in almost every kind of negotiation. Following are the steps involved in the negotiation process : 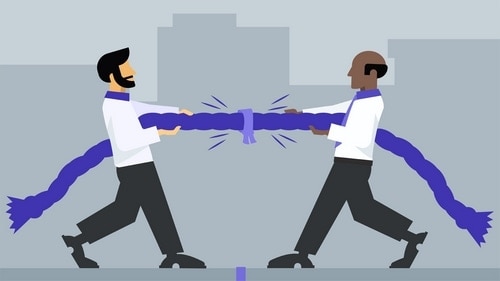 As the name suggests, this is the first step before starting the process of negotiation. It applies to both the parties involved in the negotiation. From the aspect of the customer, preinitiation would involve studying other competitive products which we can buy along with knowledge of the pros and cons of the product in question.

The customer is expected to know the market and know the available options that he has and approach the best option which is suitable for him. In the case of organizations which are involved in negotiation, they have to study the customer before initiating the process. The needs and dislikes of the customer, the hindrances that customer often faces and how is our own product superior to the competition, such aspects are studied upon by the company or seller.

Equipped with this knowledge both the participants can effectively negotiate. For the sellers participating in negotiation, they should have justification for the price, since more often than not negotiation revolves around pricing of the product or services.

This is the stage where both are participating parties put forward their arguments and facts for discussion. The sales team can approach the discussion by taking an appointment with the customer which suits both of them. The discussion should usually be conducted in a formal and businesslike room or a professional place which is quiet and uninterrupted.

The point of discussion is to avoid arguments and proceed with the help of facts. It is crucial for the success of discussion that both the parties should mention facts and figures rather than vague sentences and baseless assumptions. It is very important to remember that the idea of discussion is not to win an argument or prove the facts and prove who is right and wrong, rather it is simply to put forth the perspective and understand each other to proceed with negotiation smoothly.

Summarization helps to reach the mutually beneficial goals with help of facts for more effectively than simply arguing with baseless assumptions. It also clears any mutual ambiguity that is caused because of the discussion, so it is essential to keep this step very short and ensure that it addresses to the point directly.

It is very crucial that the negotiations should be approved by both the participating parties since one-sided agreement will not be termed as negotiation. This phase can extend indefinitely until and unless both the parties reach a consensus.

The aim of one party would be too get the best deal while the objective of the other party would be to gain as much profit from the deal as possible. Several different ways and possible agreements are discussed and passed upon between the two parties by the moderator and only and only when both the parties finally agree to a common decision then the negotiation is termed to be completed and passed.

As soon as a mutual decision is agreed upon by all the participating parties, they come to a mutual consensus and reiterate the decisions that are taken with the help of the moderator. It is agreed upon that the best course of action has been taken and it addresses the interests of both the parties.

It is also agreed that mutual interests are taken into consideration and the negotiated pact will be adhered to, by both the sides. Mutual agreement, in other words, reiterations, and reconfirmation of the facts and re-agreement by both parties.

The verbally agreed decisions are then put on paper and signed and confirmed by both parties. Sometimes there is a scope kept for amendment whereby, if negotiation does not work out for either of the party there would be a provision of amending the existing agreement. This again is decided by mutual agreement.

The last step for competition of negotiation would be, successfully implementing the decisions that have been taken in the negotiation.

The implementation is ensured by both the parties and it is seen that they are adhering to the negotiated agreement. If there is no adherence to the negotiated terms from one of the involved parties, the other one can always inform and renegotiate the terms and conditions.

An example of the Steps of Negotiations would be as follows

Consider a situation of bulk purchase of iPads by an organization.

Here the organization will study all the available options in the market along with their prices their features and benefits. The available variables in selected options will also be studied by the organization and then finally it will approach the company for initiation of negotiation.

On the other hand, Apple who will be the seller who will know about the organization that they are dealing with general details like turnover, number of employees and other things. At times the seller may also contact other sellers with whom the organization has dealt earlier to know their payment terms.

In this stage, both the parties will discuss and put forth their sides. The organization with put forth and a number of required tablets from Apple while Apple will let you know all the available options they have, along with assistance in choosing the best option.

The organization will set clear goals of the negotiation which will be the price factor and the requirement of a number of products. The organization would clarify its goals it is not willing to spend beyond a certain limit and their expectation is for Apple to match that price limit. On the other hand, Apple will try to put forth the arguments of quality of the product and the minimum price at which the deal can be closed.

As soon as the prices agreed it is finalized by both the parties and the terms and conditions of the negotiations reiterated to both of them. The agreement with involves signing and documentation of the negotiation on paper.

Finally, once the negotiation is done the organization which approaches the company to deliver the agreed goods on agreed terms and conditions.