When it comes to search engines, Google is the most powerful one without which we cannot imagine our lives today.

But have you ever thought when did it all begin? How Google became so omnipresent? In this post, we will be diving deep into the history of search engines to understand all this.

Nowadays, when we ask Google a question, we easily get a list of results that satisfactorily provides us the answer we are looking for.

It has been 22 years since Google came into existence, and in these 22 years, it has increasingly become more advanced.

This advancement that we are talking about has taken away a lot of issues that a user earlier used to face. The birth of new technological development complemented several aspects of the more sophisticated version of Google that we see today.

Among them, the entry of Machine Learning in the scene has been the most prominent one.

In the early days of the internet, the search engines were not so easy to navigate. A person had to feed the exact words to obtain the information or the website they were looking for.

Search Engines didn’t work so efficiently, and it was filled with spam. Even indexing all the websites summed to weeks of work. We have come a long way since 1990.

Get ready to be astonished, as we share the history and the evolution of the search engine from the 90s in this article. But the journey would be more fulfilling once you are well aware of what Search Engines are-

Related: How to Configure the Yoast SEO plugin?

What exactly is a Search Engine? 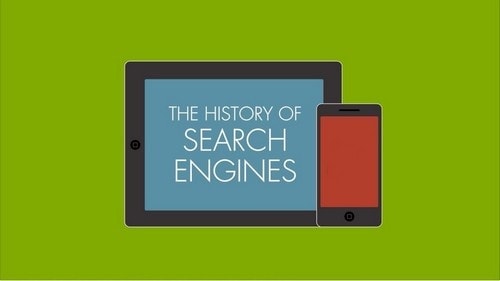 A search engine may be thought of as software or a program that operates on the internet and searches different websites or web pages on the internet to generate a list of results that is the closest to the query asked by a user.

The search engine does that by using the keywords typed by the user. This is the very reason that businesses try to rank their websites against the most popularly used keywords by the searchers.

Using the most popular keywords related to their niche gives a better chance to the websites to rank on the first page of the search engines, where most of the traffic usually comes from.

This is what makes Search Engine Optimization or SEO popular among website owners.

Google, Yahoo, and Bing are some of the major search engines used today.

They provide their users with the information they are looking for by using numerous large computers that goes through a stack of voluminous data and files.

The search engines catalog all the information available on the web and then use bots called spiders or crawlers to index, assess, and scan the web pages.

Now, as you know what Search Engines are, let us dive deep into search engine history- 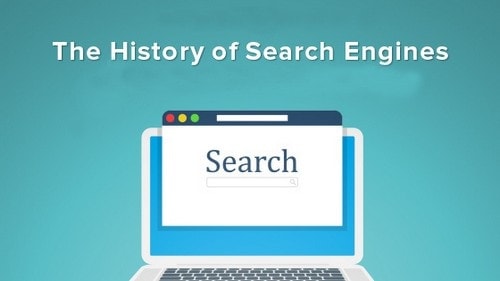 Search engines came into our world in the year 1990 in the form of Archie, which was an FTP indexing tool that allowed people to obtain certain files.

Archie was the first search engine that searched FTP sites for creating the index of downloadable files.

However, it has limited space. That is why only listings were provided, not the content. 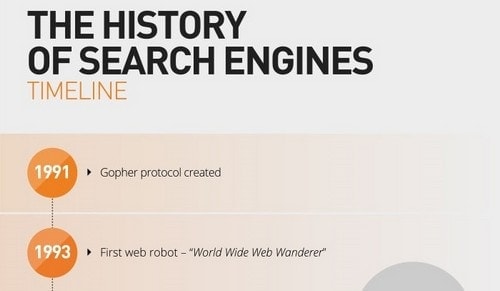 For some time, search engine remained in this primitive version of Archie.

They finally progressed from this primitive stage to the World Wide Web (www) with the beginning of indexing and crawling of websites. This ultimately also led to the creation of algorithms that stressed upon the search relevancy.

Tim-Berners-Lee, a British Scientist came up with Virtual Library. Also, in the same year, CERN Web Server was responsible for hosting many other web-servers. 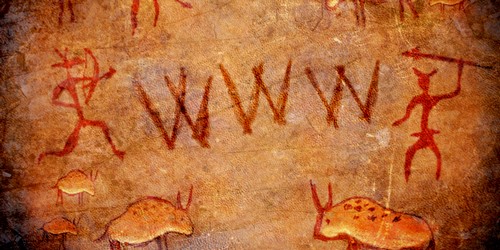 It was a search engine system in which Searched File Names and Titles were stores in Gopher Index Systems.

Jughead was also like Veronica, a search engine for the Gopher Protocol but it used to search one server at a time.

Then came World Wide Wanderer, which was a bot that was used to count active web server and gauge the growth of the internet. It got advanced later for capturing URLs. Its database was known as Wandex.

Later in 1993, primitive web search got started with JumpStation that had the information about the title and header of a page via linear search. In the same time, the World Wide Web Worm entered that had the ability to index title and URLs.

RBSE spider was also a search engine introduced in this year that had a rating system. However, in this time, it was tough to find anything unless exact titles got matched.

Related: What are WordPress Tags? All Wordpress Tags Explained

In the same year, EINet Galaxy search engine came in the picture that efficiently utilized web search features. But, it had an unnecessary library, as the size of the internet was quite small.

ALIWEB was also created in the same year by Martijn Koster. It allowed the user to submit pages they would like to index along with their description, plus crawling of Meta info was also done.

Lycos search engine was also launched in this year with a catalog of 54,000 documents.

In 1994, Yahoo was launched by Jerry Yang and David Filo. At first, Yahoo was just a collection of different websites. In those days, Yahoo URLs used human-made descriptions. Eventually, as Yahoo grew, it turned into a searchable index directory.

In the same year, web crawlers came into the picture. They were now able to index the entire content of the pages. However, due to the massive amount of data to be crawled, the web crawler was too slow to be used in the day time.

In this year, different Search Engines were introduced. First, one that came in the picture is LookSmart that was also known for having competition with Yahoo.

In this year, WebCrawler was bought by AOL. Another significant incident of this year was the use of Infoseek by Netscape as their default search.

Google, the most popular search engine of our time, came into existence in 1996. A Search Engine named as BackRub was introduced by Larry and Sergey that was known for using backlinks. BackRub is Google’s beginning.

It produces the most relevant result as it examines a number of factors, some of which are inbound links, social media, and fresh content.

The point that differentiated Google from other search engines at that time was its use of citation notation to rank pages. It was also the first one that judged a site based on its authority.

In the same year, Inktomi Search Engine was also introduced, which was a search engine HotBot which was listed on Hotwire. It also had a paid inclusion model.

From 1996 to 97, AskJeevs used human editors to match the user search queries. They also used DirectHit that ranked links on the basis of their popularity.

In the year 1997, WebCrawler was bought by Excite.

Related: How CPC helps a Business to Grow?

The Overture search engine also came in the picture this year. Earlier it had a name of Goto.com. The overture was the first company that introduced the Pay per Click model.

MSN search was also introduced in the same year. It was based upon Overture, LookSmart and Inktomi.

In the year 1999, @Home bought Excite. AllTheWeb interface was also introduced in this year. It had some advanced features that were later comprised by Yahoo.

In 1999-2001, Google got investment from Sequoia Captial. It also was selected by AOL as one of its search partners.

In 2000, the Teoma search engine was launched.

In the same year, LookSmart was bought by Zeal.

Excite got Bankrupt, and Infospace bought it in 2001. In the same year, AskJeeves bought Temoa and replaced DirectHit.

In the year 2003, Google’s first official update ‘Boston’ came in the picture.

In 2004-2007, many developments took place in the field of search engines.

In 2005, ‘nofollow’ was introduced with the help of which Google, Microsoft, and Yahoo cleaned up their spammy blogs. In the same year, the Snap search engine was launched by Overture owners.

In 2007, ‘Universal Search’ was created by Google.

Later, the former 10-listings were replaced with features like Videos, News, Images, and others in Google.

In 2008, Google launched the ‘Google Suggest.’ It is a drop-down menu that constitutes of suggested topics. Cuil Search Engine was also launched in this year.

Bing came in the picture in the year 2009. It was the rebranding of MSN/Live Search.

Caffeine indexing system was launched in 2010.

Further, to increase the visibility of fresh content or result of 50%, Google enhanced its web indexing in 2010. Google Instant also came in the picture this year.

In 2011, Yahoo, Bing, and Microsoft combined their hands to make the internet more structured. This led to the creation of Schema.org.

This is the same year when Google also rolled out some major changes to its search engine algorithm.

In the time span of 2011-13, Google continued to update their algorithms.

In 2013, Google again improved its search engine algorithm with the Hummingbird update. This update revolutionized Google by helping it to understand the user’s intent in their search queries.

From the years of 2014-2017, several other developments took place in the world of internet. First, Google continued to update their algorithm and brought out the Pigeon update in 2014.

This increased the appearance of the local web pages and local content that was closest to the location of the user.

In the same year, Google came up with HTTPS everywhere for ensuring website security.

Again in 2015, Mobilegeddon was unleashed by Google to encourage the websites to be more mobile-friendly. In this year, Bing also came up with a mobile-friendly algorithm update.

RankBrain came up as the ranking algorithm of Google in the year 2015.

Now, again in the year 2016, Google launched the possum update to attack the spam-filled websites.

In 2017, it started to penalize all those sites that contained pop-up and interstitial sites that led to the poor mobile surfing experience.

In the same year, Google came up with an unofficial update ‘Fred’ that was designed for punishing sites that have low-quality backlinks. It was also designed to punish sites that pay more attention to monetization and not on user experience.

Related: What is Ideal Length Of A Blog Post?

So, this was all about the Search Engine History that a search marketer should always be aware of.

We hope we covered the complete landscape, still, if you find we missed any of the updated related the History of Search Engines, do update us in comments and make this post the most comprehensive blog about the chronological developments of Search Engines.

How interesting did you find this Search Engine History? Share with us in the comments.