Why brands fail is a question asked by Top management as well as the overall organization when a brand fails. During the process, no one notices the failure of the brand. It is only after the company has given up that they realize where the Brand had failed. To understand why brands fail, let us have a look at the past of branding.

There were times when the Products ruled and manufacturing was the king of the trade. However, with increasing industrialization, came the time of selling and companies with good sales people ruled the market. But slowly and surely, the market moved on further and then came the time of Marketing and Branding. 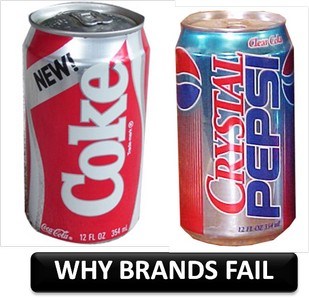 Companies began to differentiate themselves from the competition with their marketing efforts, and due to these marketing efforts, the Brands of the company and its brand equity grew higher and higher. With the growth of Brand equity, expectations grew for the brand. And any brand which made a wrong move, whether it was in product or services, dropped severely. Only the individual product or the service did not drop, it was the brand which dropped.

A brand basically helped the organizations differentiate themselves from the competition. Intel was the first one to brand micro processors and it reaped huge benefits fom it. Microsoft beat IBM due to its marketing potential as well as because of a slew of products. Apple beat Microsoft’s brand image by bringing new products and marketing itself as innovative. Thus, products, although important, slowly took the backseat and branding took the front seat for the success of a product. The right branding can even sell an average product.

The success of a company depends a lot on the branding and marketing efforts but it also depends on the product. However, it is several times observed, that even when the product is not upto mark, then too branding is the department which is blamed.

Let us take Tata Nano as an example. Many people did not like Tata Nano because for them a car is a luxury and overall Nano’s looks and performance were not upto mark. However, when asked for Nano’s failure, Tata company said that they did not “Market Tata nano properly” and that the concept was not presented in the right manner.

Thus, overall there are 7 reasons of why Brands fail.

1) Poor product – One of the predominant reasons why brands fail is when they launch very poor products, which was not expected by their customers. The best example here would be celebrity brands. Celebrities are known to go out of vogue if they give 4-5 flops one after the other. Their brand value drops completely and their brand fails, albeit for a limited time.

2) Brand recall drops – Here actually the marketing department is to be blamed. A company has to put in efforts to ensure that it has high brand recall value and that the brand is repeatedly bombarded to the customer to increase brand recall and to avoid brand failure. The positioning of the brand needs to be up to mark as well. However, when brand recall drops, customers slowly move to another brand. This may cause brand failure as the recall is too low for the brand to continue.

3) Too much expansion with few resources – Some companies aim to expand very fast as compared to the resources they have or their brands potential to carry so many products. If you look at Samsung as a company, their mobile phones, refrigerators and televisions are in demand but their cameras and air conditioners have failed. Thus, expanding too fast or too much will leave with few resources to maintain your brand equity across the segments.

4) False marketing – A brand is a promise. And if that promise breaks, you don’t have a brand. For example, when Harley Davidson introduced perfumes, the brand was severely affected. Because Harley Davidsons promise to its followers is for the ride that they are going to get on their bikes. However, when Harley came with a commercial product like a perfume, it was received negatively by the HOG group because Harley broke its promise.

6) Irrelevancy – The brand might become irrelevant because of many reasons. One of the most common reason is technology. For example – Nokia as a brand lost its market share because it did not give the latest technology to its customers. Android was the craze at that point of time and Nokia tied up with Microsoft instead of Android which caused redundancy in the brand as the software did not develop as fast as that of competition. Thus Nokia was redundant and Apple and Samsung were the new players in the game.

7) Increase in competition – Increasing competition has caused the brands value to be diluted. For example – In soaps and shampoos, there are a lot of brands which came and went or couldn’t conquer. This is because already there is such high competition that a brand is not able to stick and even brands which slow down in their pace, risk being thrown out of the market. Similar is the case in the Cola market where Gold spot bombed because it was not able to keep up with the competition.

Thus overall there are many reasons of why brands fail. However, it comes down to the fact that you cannot blame a product failure to branding efforts. The product needs to have an inherent value for the branding to work.

What is Brand Equity? Importance of good Brand Equity
Why are your customers brand switching?
All Tutorials on Branding