It’s my can offering is considered to be a new generation drink, the drink has managed to grab the imagination of Teens and young Adults alike. Pepsi through the combination of innovative ideas (like Pepsi Blue even though a failure), effective communication and aggressive advertising has been able to stay relevant to its customers. 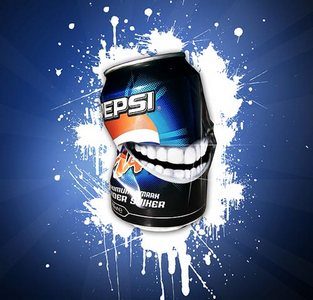 is based on consumer’s perception of Value : The Price are primarily market determined in case of soft drinks. But Pepsi never got involved in a price war with coke as it would have eaten into the brand equity of Pepsi as consumers perceive that the basic price they pay for brands like Pepsi is justified as its more about the refreshing cola experience rather than a just a thirst quencher.

Pepsi’s Brand positioning has always been as a refreshing cola drink for the youth, ubiquitous on just about every social occasion. The positioning has remained same since its inception in 1898. The brand positioning was prompted primarily by the market segments largely untapped by coca cola (young generation) and its sweet sugary taste suited for its young consumers. Thus it was able to create a Point of difference from Coca cola.

Pepsi has maintained continuity in its brand image and has been consistent in its brand promise of refreshing drink for Youth. It has always depicted a defying attitude and continued to challenge the market leader (Coca cola even though not in India) Its campaign have been about making a mark.

Pepsico’s brand portfolio in the beverage market includes Gatorade, 7UP, Aquafina, Mirinda, Mountain Dew, Nimbooz, Tropicana, Slice and finally Pepsi. All these brands cater to different market segments and rarely cannibalize each others sales. It also gives Pepsico optimum market coverage. 7. Repertoire of marketing Activity : Pepsi’s Brand Elements are distinctive and the depth and breadth of awareness is very high. It has an extensive distribution network from super markets in metros to Mom and Pop shops in the interior heartland of the country. Promotional campaign have also been innovative and the usage of social media like Facebook’s Pepsi photography contest and internet campaigns like ‘Change the Game’ have been phenomenal.

Pepsi’s give it brand manager the liberty to experiment as we can see Geetu Verma’s (VP-Innovation) idea to capture the next tier of customers at the bottom of the pyramid was received with great enthusiasm by the Company. Pepsi also has predefined set of rules that brand manager should follow which is meant to develop a sense of ownership for the brand.

Pepsi marketing team is probably the most innovative team when it come to determining go to market strategy for its product. The company’s marketing expenditures are very high. 10. Monitoring Sources of Brand Equity : Pepsi has a series of monitoring programs like periodic brand audit, routine brand sales tracking, monitoring brand performance, etc.