What is Aristotle’s Model of Communication?

Aristotle’s Model of Communication is a unique communication tool proposed before 300 b.c by the Greek philosopher Aristotle. It is a linear model that puts a greater onus on public speaking instead of interpersonal communication that other models do.

The speaker’s role to deliver a speech is considered as the first element of the 5 primary elements. In this model, the speaker gives the speech whereas the target audience is passively influenced. 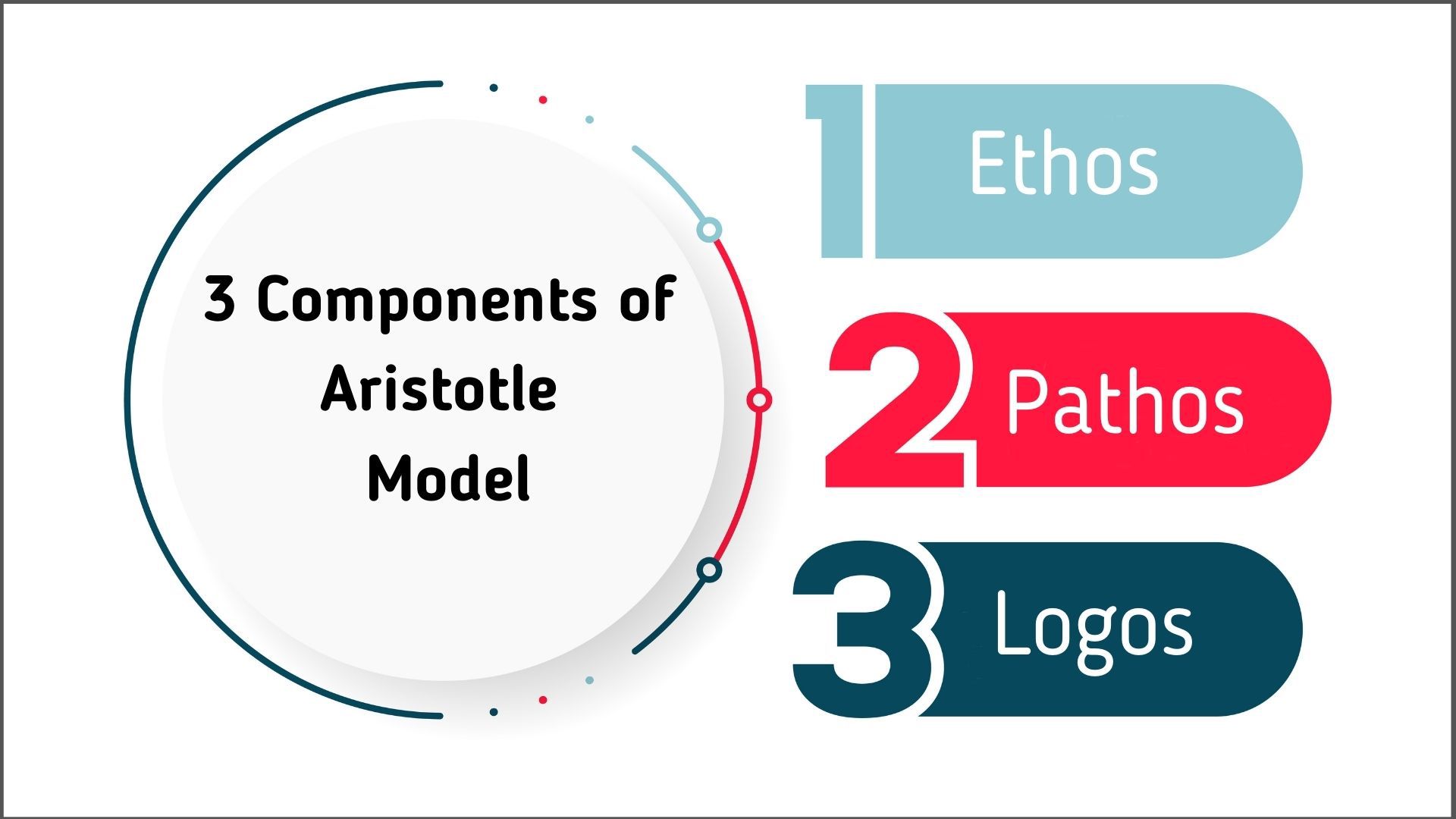 Aristotle’s model of communication is mainly categorized into three components that are related to each other and are considered a must to become a good communicator. These elements of communication are as follows-

Ethos is the characteristic that defines the credibility of the speaker in a communication model. It is a fact that without credibility the words of the speaker will hold no power over its audience and thus fail to impress and persuade them. Remember it is the position and expertise in a specific field that gives the speaker credibility, authority, and power. The speaker plays an important role and must maintain eye contact so that his speech is widely accepted by the target audience. This is referred to as Ethos and is one of the important elements of Aristotle’s Model of Communication.

Let’s explain Ethos in the Aristotle Model of Communication with an example. Suppose two politicians Anand and Bilal are contesting from the same seat. Anand has the reputation of working diligently for the people whereas the other person Bilal is known for his corrupt nature. In such a scenario people will most probably go to hear the speech of the good politician and not the corrupt one. This is because it is Ethos that is showcasing the credibility of the speaker or the writer. Remember it is easy to damage the Ethos of a person in the Aristotle Model of Communication. In the above example, Bilal was not considered a corrupt politician from the beginning but when he became involved in a scandal people started thinking of him in a bad light.

When there is an emotional bond it becomes easy to make a connection. Pathos in the communication model helps the speaker to connect with the audience through various emotions like anger, sadness, happiness, confidence, etc. Profit and non-profit organizations, politicians, etc. capitalize on Pathos to address and connect with the emotion of the target audience. In the above-mentioned scenario, politician Anand will take the help of Pathos and refer to his good deeds to create a connection with his audience.

Logos is considered an important element of Aristotle’s communication model that signifies logic. The audience will not only be influenced by the speech but also the logic behind it. The speaker has to take the help of Logos in Aristotle’s communication model and present statistics and facts so that the audience can believe and ultimately relate with him. Persuasion will work only to a certain degree but when it is backed by rational thoughts and factual information then the combination is awesome. In the above-mentioned example, if the politician Anand highlights his good deeds with facts and figures, for instance, the number of hospitals or schools he has helped to build then his chance of connecting with the audience will automatically rise.

Criticisms of Aristotle’s Model of Communication

Aristotle’s Model of Communication has faced condemnation from other well-known personalities in this field.

Here is a video by Marketing91 on Aristotle’s model of communication. 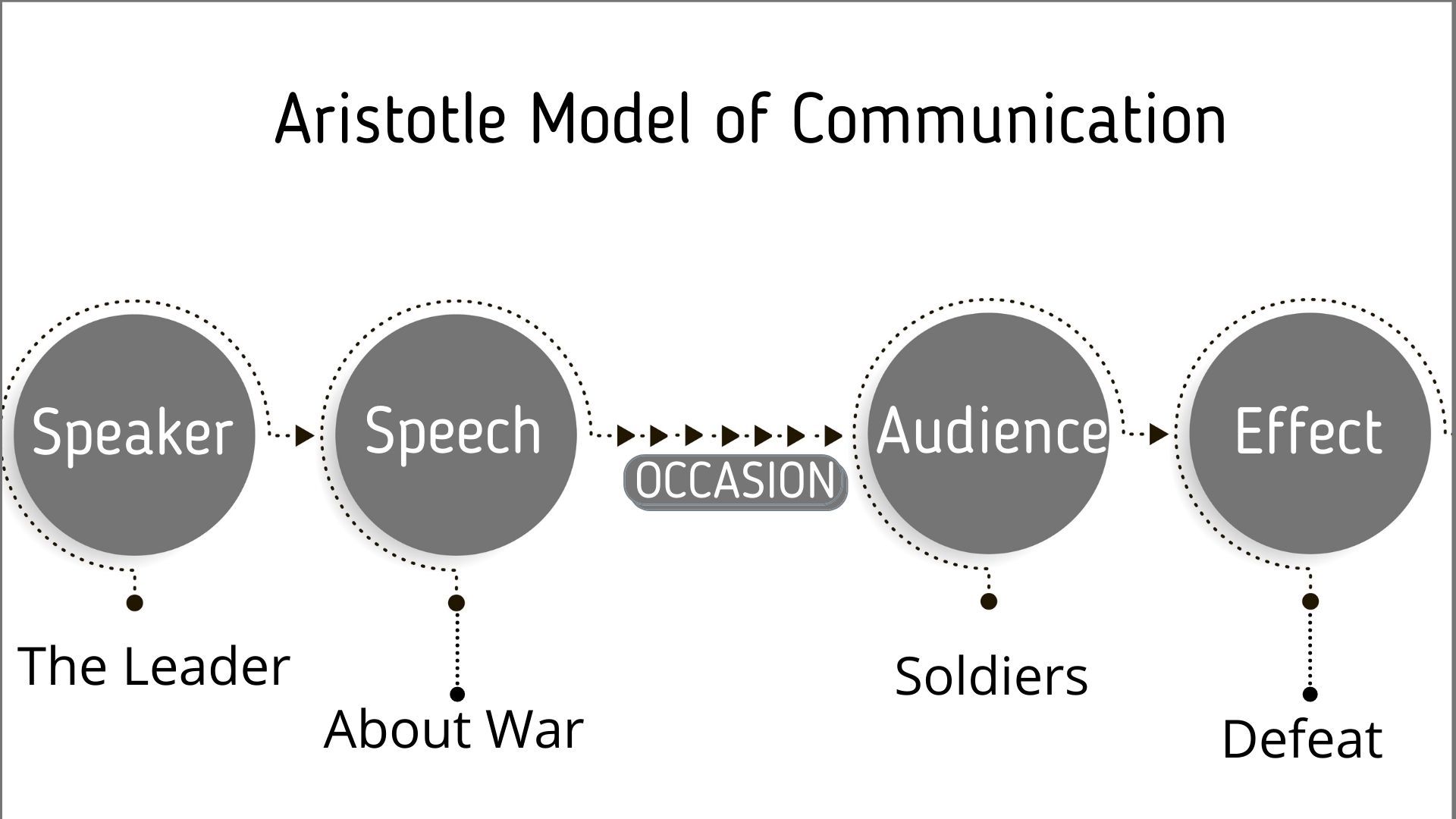 Aristotle’s Model of Communication has played an important role in oral communication and mass communication. It can be explained with the help of the following example.

Suppose two countries were at war with each other. They both had equal resources and soldiers and still, one country was able to gain victory over the other. An important reason for this will be given to the interpersonal communication and inspirational speech to the audience given by the leader. He used all three elements of Aristotle’s Model of Communication Ethos, Pathos, and Logos to inspire the feeling of patriotism and thus could influence his army with logic, emotional connection, and credibility. The army believed him because of his credible nature and could relate to his sincerity because of emotional connection and facts. This gave the soldiers the necessary boost to handle the situation with more valor, mental strength, and determination. In this example of Aristotle’s Model of Communication the 5 primary elements speaker, speech, occasion, audience, effect are used.

Speech – About war and victory

Audience – Soldiers and other army personnel

There are several real-life examples where leaders have taken the help of Aristotle’s communication model to inspire and influence their target audience. King Alexander used his public speaking skills and gave a rousing speech to his soldiers when they refused to cross the River Indus and march towards the enemy camp. Adolf, Hitler is considered one of the most influential orators of his time as he could easily manipulate his audience through inspiring words. Other leaders with some of the greatest public speaking skills are George Washington and Barrack Obama.