Claude Elwood Shannon and Warren Weaver are credited with the creation of this communication model. They first published this model in a Mathematical Theory of Communication in 1948. Then both of them co-authored a book in 1949, which reprinted the theory published the previous year.

While Shannon was a mathematician and electronic engineer, Weaver was a scientist. Both of them worked on this model of communication.

However, it is essential to note that the Noise factor was added later. They also considered feedback from the receiver to the sender in their communication model.

Development of the Model

The primary objective was to find a path that can convert communication into electrical signals. This was expected to simplify the jobs of engineers who were working at the time with telephone cables.

For example, whenever we download any information from the internet, those files are calculated in bits per second. This calculation is done based on the mathematical models, which were developed by Shannon and Weaver.

It was Weaver who later changed the linear model into a cylindrical one by adding a critical component. The model is applicable in almost all areas of communications. This model has been called the mother of all models of communication.

Components of Shannon and Weaver Model 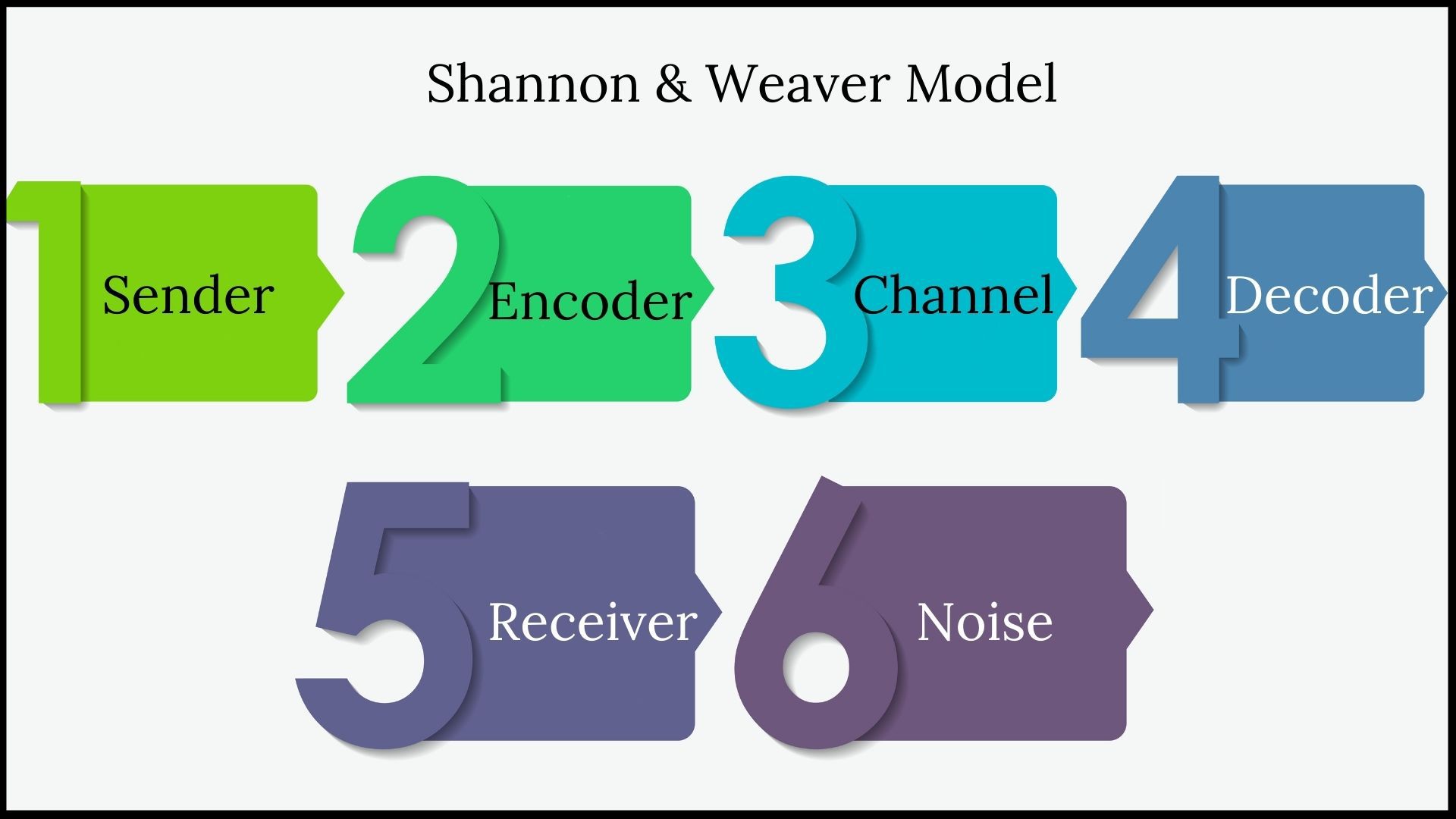 There are six primary components of the Shannon and Weaver model:

The sender can be anyone responsible for originating the message like a person, a company, or a combination of both.

Encoding is the method by which the message is transmitted, like binary data on the internet or electrical impulses on videos or sound waves on the radio.

It can be any of those or a combination of all of them. Primarily it is the method by which the message is transmitted.

A telephone call can also be considered as a channel by which a message is delivered from the sender.

Decoding does the exact opposite function of encoding. For example, if encoding packs the box to be delivered ahead, the decoder unpacks the box.

For example, if an encoded email is sent to your computer, it is decoded back by the receiver’s computer to convey the message of the mail to the receiver.

The recipient of the message is known as the receiver.

The receiver is at the other end of the communication channel precisely opposite to the sender. This is the person or entity with whom the sender was trying to communicate earlier.

The receiver should be able to have the technology which can understand the message sent by the sender. For example, if a text message is sent to you, then you should have mobile to read the text message.

Similarly, the receiver should have all the necessary tools to receive and comprehend the message; else, the message will not be compelling, and the whole idea of communicating with each other will be lost.

When noise is present, the sender and receiver cannot exchange ideas, and the communication may be lost. In business terms, noise is a crucial factor that marketers should consider before sending a message to customers.

For example, if there is an advertisement for a new Rolex watch in the newspaper which you read,  here an advertisement is a form of communication in which the sender is the company promoting the product while on the receiving end is the customer.

Thus, in this case, news has performed the role of noise, which has failed the purpose of communication. A baby crying in a movie theatre is an example of a noise that distracts you from watching the movie.

Feedback is when the receiver communicates back to the sender about the message.

Shannon and Weaver’s model offers a mathematical approach for communication models, which is very useful in understanding the process of encoding and decoding messages from the source.

Although this model can be considered as the mother of all communication models since most of the modern-day models sprouted from this one, there are many more improvements that can be made.