What is the Transactional Model of Communication?

Important factors affecting the communication are-

It is a fact that society decides the way people can communicate with each other. The social context in the communication process is about the laws, values and norms etc. in a society that governs communication. It also refers to the rules and restrictions that every person has to follow and the ones that limit their ability to communicate as per their personal desire.

Some examples of stated social rules that we pick up automatically as we grow are to greet people with a smile, say thank you when you receive compliments or in gratitude, one should never lie, do not disrespect your elders, speak the truth, apologizing for a mistake and so on. It is parents, grandparents at home and teachers in school that try to instil the example of the social rule in students and children from an early age.

The same is the case with norms. These are unstated social agreements that people pick up through practice and observation. Trial and error method is also a useful way through which everyone can learn how to communicate effectively in the transaction model. Sometimes you might have received a strange look from others and this might have helped to realize your faux pas.

Let me give one example to highlight this point.  Rajat entered his office wearing informal clothes on the first day of his job. He received several strange looks that made him realize that something was wrong. He never again deviated from the office norm and saved himself from further embarrassment by gaining a better understanding. There is no formal punishment for breaking social norms but it does make the situation difficult and the person embarrassed.

Also Read  Miscommunication - Definition, Causes and How to Avoid It?

The relational context in the communication process refers to the manners and previous relationship or interpersonal history.

Pre-established values and norms shape the manners of human beings. If two people meet then the interaction will be different if they are friends from the ones who are strangers. It becomes normal to be awkward with people who are not familiar whereas the process of communication becomes easier in case of established relational context. People are more likely to break or bend rules and social norms in these contexts when their understanding is better.

Type of relationship is also an important factor in deciding about the way one person will interact with another. If you have a formal or new relationship with someone then people give more effort, for instance, a new employee will try to figure and follow established norms and rules more diligently in his workplace then the employee who is working there for a long time and has already an understanding within the place and established a type of relationship.

The cultural context in the communication process refers to the identity and lifestyle of people. It includes numerous aspects like class, nationality, gender, race, ability, sexual orientation and ethnicity. People from a similar cultural group can communicate in a better manner compared to people belonging to different groups.

It is a fact that people belonging to a specific cultural group show a tendency of closed mindset towards other cultural groups. The exchange, as well as response between sender and receiver, is affected by factors like mindset, social upbringing, cultural beliefs, moods, attitude and experiences.

It becomes important to have an open mindset about other cultural identities. It is practice and reflection that develop the skills to adapt to shifting cultural contexts.

Here is a video by Marketing91 on Transactional Model of Communication. 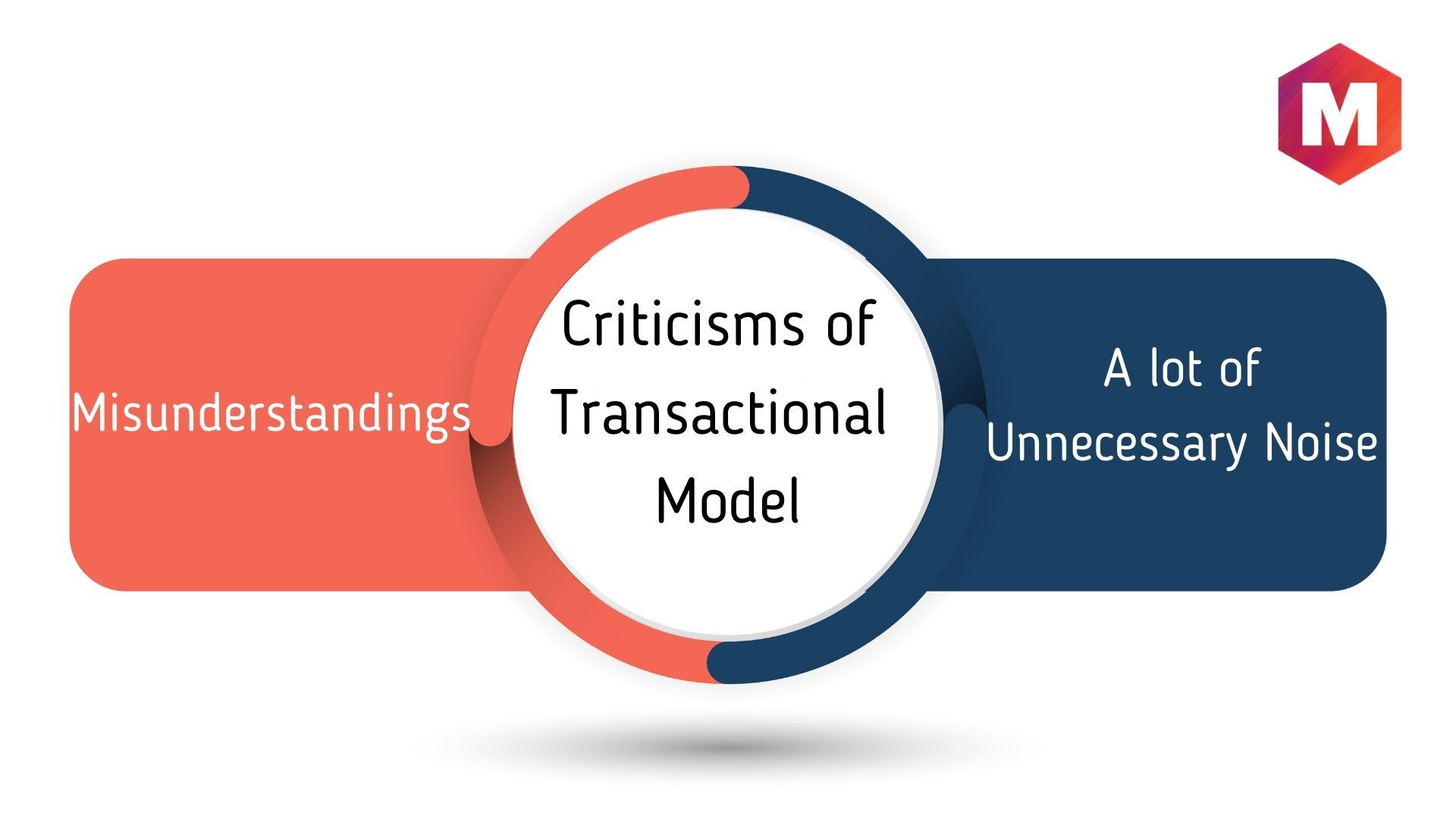 Feedback is a vital element in the interpersonal communication models as it provides an opportunity to clear any misconception or misunderstandings. Without a verbal response between a sender and receiver in the communication models, it will not be possible to determine whether the receiver of the information has received the message as intended

2. A lot of unnecessary noise

Communication is simultaneous in the transactional model of communication and this results in a lot of unnecessary noise.

Examples of the Transactional Model of Communication strategy

Some transactional model of communication examples is given below to explain the concept in clear terms.

In the transaction models of communication reliability and efficiency of messages is dependent on the medium used. For example, in face-to-face communication, the message is perceived by a person differently compared to the message received over a phone call. In face interaction, the receiver can gain more information through non-verbal cues but that does not happen during a phone call.

The transactional model of communication includes the role of environment and contexts and also talks about encoding and decoding non-verbal communication and simultaneous feedback. Even everyday interactions are included in the models of communication. People living within a similar environment or sharing similar social systems are bound to communicate easily with each other compared to the people belonging to a different background.

Also Read  The 10 Objectives Of Communication

Thank you reading our article about business communication model.