The Concept of Six Sigma is a disciplined, statistical-based, data-driven approach, and a continuous improvement methodology for eliminating defects in a product, process or service offered by the company.

It was developed by the Motorola company in early to middle years of the 1980s based on the fundamentals of quality management and then became a popular management approach at General Electric (GE) in the early years of 1990s. Hundreds of companies and organizations all around the world have adopted Six Sigma as a way of doing business in an efficient manner.

Breaking Down the Concept of Six Sigma :

The Concept of Six Sigma can also be thought of as a measure and methodology of process performance, with Six Sigma being the main goal, based on the defects per million. Once the current performance of the process is measured, the next goal is to continually improve the sigma level striving towards the 6 sigmas in an effective manner.

Even if the improvements do not reach the 6 sigmas, the improvements made from 3 sigmas to 4 sigmas to 5 sigmas will still reduce costs and increase customer satisfaction in the best way possible. Six Sigma is a methodology that mainly focuses on eliminating defects in the business processes of the firm.

Motorola was the first company to introduce the Concept of Six Sigma methods in its manufacturing process. These principles were employed by the firm to bring down the defect rate in their production line and entire processes.

After it was implemented by Motorola, these Six Sigma methods were practiced by various other firms as well. The principles of Six Sigma caught the attention of various companies located all around the globe when the General Electric Company earned a huge sum of $300 million because they implemented Six Sigma principles in their manufacturing process.

Well, that’s not the end of the story; these principles were also employed by domains such as healthcare, telecommunications, education, finance, military, and various other service sectors. These results proved that Six Sigma methods are appropriate for meeting business goals and objectives in an efficient and efficient manner.

The Concept of Six Sigma is an organizational structure that mainly concentrates on continuous improvement of the manufacturing processes. The primary objective of this methodology is to achieve goals and objectives set by the organization in an efficient manner keeping costs and defect rate at a minimal point possible by the management.

The Five Steps of the Concept of Six Sigma :

True believers and practitioners of the Six Sigma method follow an approach called DMAIC that stands for define, measure, analyze, improve, and control.

It is a statistically driven methodology that users learn through Six Sigma certification or companies implement as a mental framework for the improvement of their business processes.

The main ideology behind DMAIC is that a business can solve any seemingly unsolvable problem also.

First, a team of people, led by the Six Sigma champion, defines a faulty process on which to focus, decided through an analysis of company aims, goals, and requirements.

This definition outlines the problem, goals, and deliverables for the required project. Secondly, the team measures the initial performance of the work process. These statistical measures make up a list of potential inputs that may be causing the problem or a bottleneck and help the team understand the process’s benchmark performance in a better way.

Thirdly, the team analyzes the process by isolating each input of the process, or the potential reason for the failure, and testing it as the root cause of the problem.

Through intricate levels of analysis, the team identifies the reason for the process error. From there on, the team works to improve overall system performance and finally, the team adds controls to the process ensuring that it doesn’t regress and become ineffective again.

What is Lean Six Sigma? 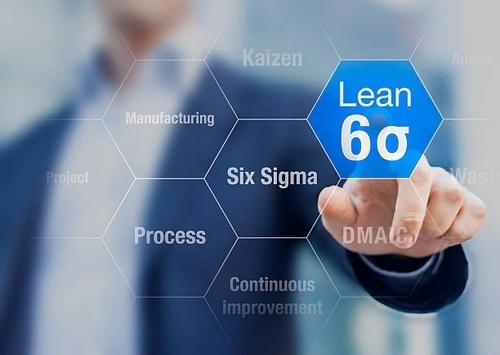 As discussed above, the theory of Lean Six Sigma is a combination of Six Sigma and Lean methods. By combining these two processes and implementing these methodologies within an organizational structure, results in work process improvements, reduction in waste, and an effective monitoring of the processes which would eventually lead to increase in the profit margins for the firm. Organizations must follow a set of rules and regulations for obtaining the desired result after implementing Lean Six Sigma methods in the business processes.

Below mentioned are the success factors of Lean Six Sigma :

For the success of any project in the firm, the project leader plays a very critical role. The project leaders have the responsibility to prioritize all business activities in the right sequence and order of the priority. They have to ensure that all the resources are readily available to the team to start the production process as per the timelines.

It is always advisable that the project manager employs the right members in the project team for the work processes. If the team members are already Six Sigma certified members then the project manager can assign them the task of monitoring the overall project development process, as they are well versed with all the methods and techniques of the concept of Lean Six Sigma.

3) Training for the Employees

Proper training sessions and programs have to be conducted for the employees of the firm so that they have a complete knowledge about the project and also the required tools for completing the project successfully.

The project status must be reviewed at regular intervals and this can be done by conducting regular team meetings with stakeholders and senior management team. The feedback and suggestions must be shared with all the members working on the project

It is important that all the procedures must be correctly documented and reported to the senior management, which will give the organization a complete information about the financial impact that has been created after implementing Lean Six Sigma methodologies in the firm.

Lean Six Sigma benefits are not only the members confined to the organization, but it is also beneficial for the customers of the firm as well. With the help of Lean Six Sigma methods, customers receive the final product according to their required specification and quality, and this will lead to customer retention and loyalty which is beneficial for the organization.

Stakeholders of the company are also benefited by Lean Six Sigma methods as these procedures cut down on the waste during the business work processes resulting in higher profit margins and revenue generation.

As part of the Lean Six Sigma methodology, all the employees of the firm will be thoroughly trained. They all will get the required information for successfully completing the project and they also have good knowledge about the tools that they have to work with for implementing the method.