What is Basic Research?

It has been seen that basic research is required for the progression of every field. It is only with research that the scientific community can search and invent novel and unique things. It is with the help of research that industries come up with new products, and it is because of research that companies can understand the needs of their customers and get feedback about their products.

Basic research is essential for advancing knowledge about a lot of things since it focuses entirely on creating as well as accepting or rejecting theories that explain different phenomena. The source of almost every scientific idea is either imagination or research. It can be descriptive, exploratory, or explanatory. As much as all the types of research are used everywhere, the illustrative model is the most commonly used research.

Basic research is the source of generating novel ideas, theories, principles, etc. which may not be used immediately. Still, they form the basis of progress as well as in the development of different fields. Almost all of the products that exist today, which we take for granted are generated because of research.

For example, 50 years ago no one would have thought that we would be carrying a small and portable device which can make a call anywhere in the world, anyone would see anyone in the world and do so many things that a computer could do – a mobile phone. Yet it was possible to make the mobile phone more compact, added with more functions, and more user friendly. This was possible only because of research.

Basic research does little to help people with small everyday concerns; instead, it helps in new ways of thinking which may have the potential to change as well as improve how the researchers deal with their problems, and its mostly in the future.

Basic research is often performed with the thought of practical ends. It helps in general understanding knowledge and provides answers to many crucial and possible problems, yet it may not answer every answer to every question. Many of scientists, for example, are not interested in practical applications of their work, but still, there would be no progress in industrial development if basic research is not done.

Many of the essential discoveries were a fluke and happened by chance. They were done with very different things in mind and yet they have been helpful to the society. For example, Coca-cola was found as cough syrup, and it was marketed as a cough syrup.

Later, considering the likings of people and with the help of research, improving the ingredients a little, it was marketed as a cold drink. Minoxidil was a drug discovered for hypertension, but it came with a considerable side effect of hair growth. Hence, with the help of research, the drug was toned down for its hypertensive properties and is now used commercially as medicine for hair growth.

Basic research helps with the discovery of new knowledge and provides scientific capital. It creates the background from which the practical application of that research should be drawn and implemented.

The immediate application of basic research is rare. It is like searching for oil in the ground during which you have to drill a lot of holes, and only one of them has oil. Basic research is somewhat similar. From a different point of view, basic research can be considered as an investment that requires minimal investment but generates long term results.

The amount of freedom that is given to scientists, determines the difference in basic and applied research. In the case of applied work, the problem is defined, and the scientist looks for the best solution possible which meets these conditions, and in the case of basic research, there are no such restrictions. His own imagination and creativity lead him. 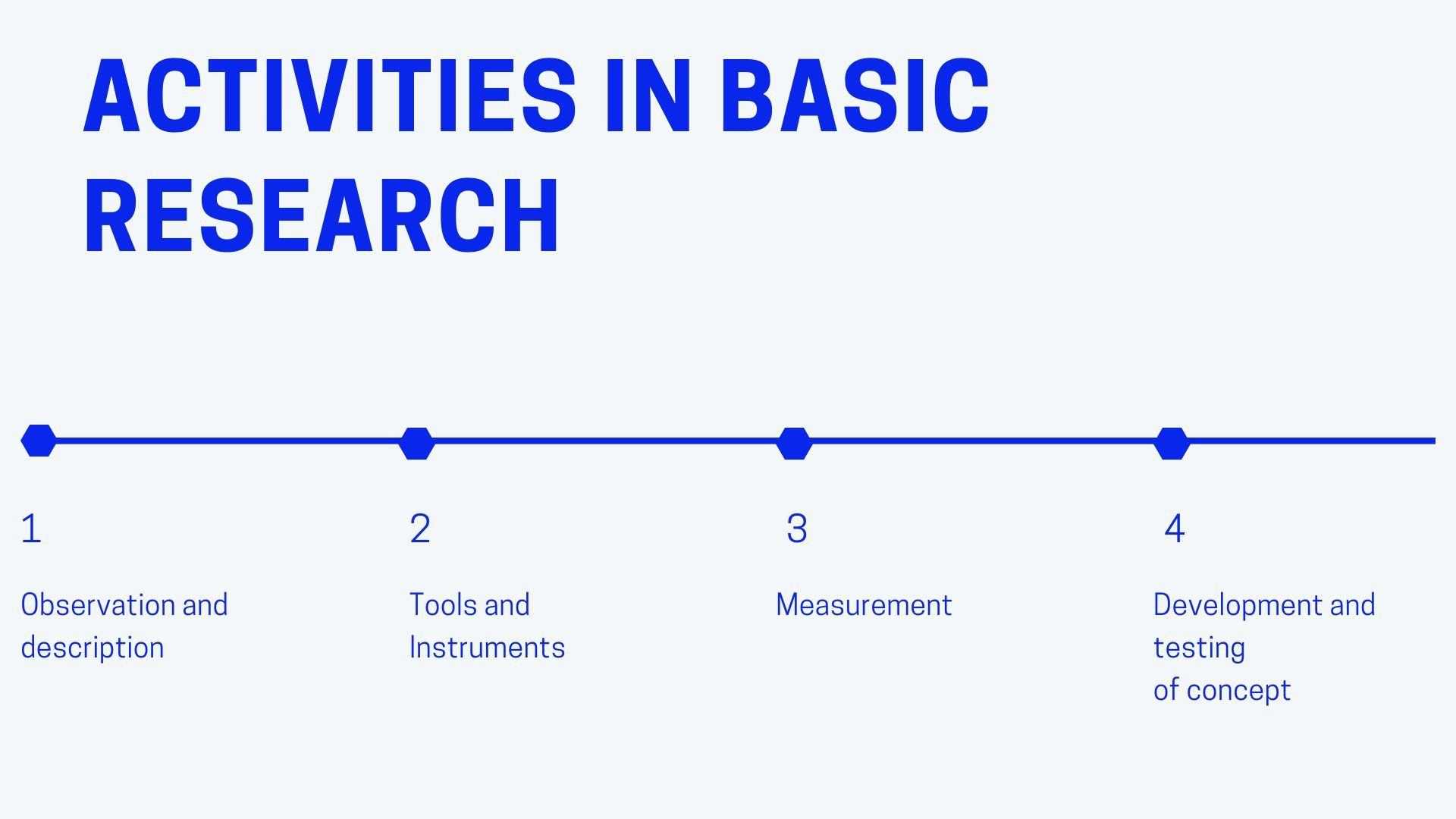 Careful observation and detailed descriptions are necessary for research to explain it. Observation and description have a very crucial role in research. The scientists observe the phenomena and then describe it with a little bit of theory. It is an observation that helped Isaac Newton to question ‘Why did the Apple fall?’ and later he went back and researched and came up with gravity.

It is with the observation that Galileo discovered the Sun is the center of the universe and not the earth. Even in modern-day, Steve Jobs observed the problems of the old Cassette player and came up with the famous iPod.

Every researcher and scientist requires tools and instruments for conducting research. These tools vary depending on the nature of the research to be conducted. For example, research to understand the needs of customers requires a questionnaire while medical research may require different types of machinery.

It is essential to understand and use correct tools for correct research so that you get accurate results. Few basic requirements of these tools are that they should be readily available and should be standardized in compliance with the respective research standards.

Every step in research requires measurement, for example, the duration for which the research is to be carried out, the number of times the procedure is to be repeated, expected results, number of people satisfied with your product, etc. Precision is required in measurement.

Even though basic research takes a limited sample size, precision is nevertheless a necessity since if the results are not precise, then the conclusion of the research will be flawed.

4. Development and testing of a concept

Developing a meaningful concept is one of the most challenging parts of the research. It is with the help of developing a concept that the mind, which works on the raw input of experience separates the essence and then recombines it in something new which provides insights about the concept. Developing the concept is a crucial part of research since it is the backbone of the research. Generalizations can be avoided because of developing a concept.

The next important step is to test this concept so that it can be validated. Testing is also done to check the reproducibility of the research and confirm if the premise and assumption considered initially is correct.