Comparative Advantage is an economic advantage which happens if one country or one economy is able to produce a good or service at a lower opportunity cost than another manufacturer possibly of a different country or economy. Since this implies that a country can produce a good that is relatively cheaper than other countries, David Ricardo, in his book “Principles of Political Economy and Taxation”, suggested that the countries should specialize in producing goods and services for which they have a comparative cost advantage.

The concept of Comparative advantage has become a fundamental concept in economics and is consistently used to model international trade and the competitiveness of countries. Sometimes referred to an international division of labour, it measures competence in terms of relative magnitudes and implies an opportunity cost associated with the manufacture of one good over another. This theory implies that all countries, at all times, can benefit from cooperation and voluntary trade.

Let us discuss this with an example taken up by David Ricardo himself explaining the comparative advantage. He considered the world economy and discusses two countries –Portugal and England – that produced two goods, having identical quality, of similar quantities.

Let us discuss another example of comparative advantages by factoring the cost of production. A Country X can produce wool for $15 and cotton for $1 a kilogram. Wool can be imported from other countries for $5 while Cotton can be sold to other countries for $2. The Country X, if applying the theory of comparative advantage, will certainly benefit from exporting cotton and importing wool.

The theory of Comparative Advantage can also be explained by factoring in productivity. Let us take an example where a Country Y manufactures a technically superior model of a Product A for $120 million by using 1 million hours of labour. We can understand that the productivity rate for the production of the above is $120 / hour.

The same country, however, can produce 100 units of Product B costing $0.10 with an hour of labour. The productivity rate, for Product B, is calculated to be $10 / hour. From the numbers given here, we can conclude that the country has a comparative advantage in Product A and benefits from producing Product A and importing Product B.

A very contemporary example of this can be seen in China and United States. Since labour is cheap in China, it has the comparative advantage with the United States of America. Chinese workers are able to produce simple consumer goods at a much lower opportunity cost.

On the other hand, The United States’ comparative advantage lies in capital-intensive, specialized labour and American workers are able to produce goods or investment opportunities at lower opportunity costs. If China and the United States specialize and trade along these lines, it will be beneficial for both of them. 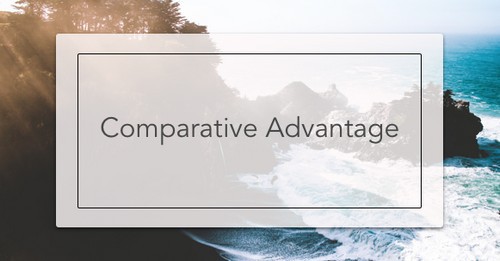