It is a right wing party whose primary ideology is around Hindutva (Hindu religion). They are also closely related to the RSS (RashtriyaSwayamsevakSangh). It was founded on 6th April 1980 before which it was called Bharatiya Jana Sangh and Janata Party before that. Their alliance is called National Democratic Alliance (NDA). 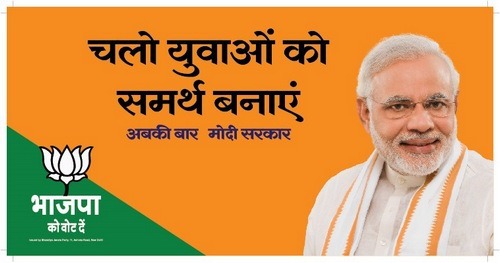 Strengths in the SWOT Analysis of BJP :

Size: They are very big in terms of the number which gives them a pan India presence making them a national party.

Ideological Platform: BJP is the only party which stands on a platform of Hindutwa and spreads it across the country. Other parties flaunt they are secular but don’t act in the way and that hurts their image.

Support: They have support from many groups that is not expecting anything in return. Such support gives them strength to do all the activities. Groups like RSS, Bhartiya Janata YuvaMorcha, BJP MahilaMorcha and BJP KisanMorcha.

Modern Campaign: They are the only party that utilises digital modes to campaign and connects directly with the people.

Able Leader: They have a great and dynamic leader in the centre to support them. Narendra Modi is an excellent and hard-working leader which makes the environment enjoyable and full of energy to work for.

Full-time Workers: They have full time young, women and minority workers that work actively around the country for the betterment of the party. They spread positivity for BJP and help to cover their promises.

Youth Oriented: They have a huge youth support towards them with a positive opinion poll.

The absence of competition: BJP does not have much competition in terms of a number of parties. It only has congress and AAP, which are currently struggling.

Weaknesses in the SWOT Analysis of BJP :

Lack of support: As they flaunt the flag of Hindutwa they lose the support of the minorities and Muslim people which create a problem in the centre to form a stable government.

Fight for Superiority: A lot of time differences come into the picture for becoming the leader of the BJP and the RSS. This creates tension and makes it hard for the party to function smoothly. There are a lot of internal contradictions conflict of interests.

Geographical Problems: They have excellent support when it comes to the West part of the country. They lack support from the people of the South and the East. They do not trust the part enough to vote for them.

Inability to promote Talent: BJP faces problems when it comes to positionable and dynamic candidates for the front-runner positions. The talent should come from the within but there has been a problem in doing so. They need to realise this and nurture the internal talent.

Top Leadership: Apart from few leader most of the top leaders are old. They need more youth representation in the executive committee.

Opportunities in the SWOT Analysis of BJP :

Opposition Rules: As they are also in opposition in many states they can bring out the hole in the system and use this for promoting their goodwill and gain better public image.

Finance Power: They have the high financial backing to carry out political campaigns.

Backing: Most educated and business class people support Modi and his ideologies for the country. This means a lot for BJP and brings in heavy support from the literate.

Changing Mindset: A lot of people are becoming more and more Hindutwa these days. This has helped them to connect better to BJP and certainly made the BJP popular.

Incompetent Leaders of opposition Parties: Parties like Congress are struggling to find an able, dynamic and public loving leader due to which they are losing traction day by day.

Threats in the SWOT Analysis of BJP :

State Parties: Their main competitors are the state favourites like TNC, MNS, SP, BSP, etc. they need to topple these to form the state government and gain a majority in the Rajya Sabha.

Vote bank division: Due to the game of reservations in the country the vote bank gets divided and the party that this hurts the most is the BJP.

Dynamic Opposition: A lot of young and dynamic leaders are working for the congress. They can make a serious damage to BJP by working hard.

National Problems: Problems like unemployment, poverty, etc. are making the people unhappy and this can hamper the win in the next elections.