Sampling and sample design is an essential factor as it is based on the judgment of the researcher to provide the best information for the objectives study.

A sample is a smaller part of a whole quantitative data that has been collected through surveys or thorough observations. It can be defined as a smaller unit that represents the real data.

The method of collecting samples is called sampling. Sampling is the basis of almost every research and hence is a crucial part of most projects. There are multiple ways that you can use for collecting samples.

Principles of Choosing a Sample

As mentioned earlier, a sample is just a smaller fragment that represents the real data collected. Thus, the sample should be collected in a way that, when you analyze it, you get the information about the real data.

The sample should be representative of the data. It should be a unit containing all the subdivisions included in the data. This means integrating the sample by reduced proportions must give the recorded quantitative data.

The sample must also be free from errors. Thus, the size of the sample matters too. It shouldn’t be too small to avoid omitting anything or for it to be full of errors. It should be made using a given proportion, so it is error-free.

You have a better sample if you have a low bias. Thus, it is preferable to be imprecisely right than to be precisely wrong.

There are two types of sampling:

These two divisions are then subdivided. These are discussed below. 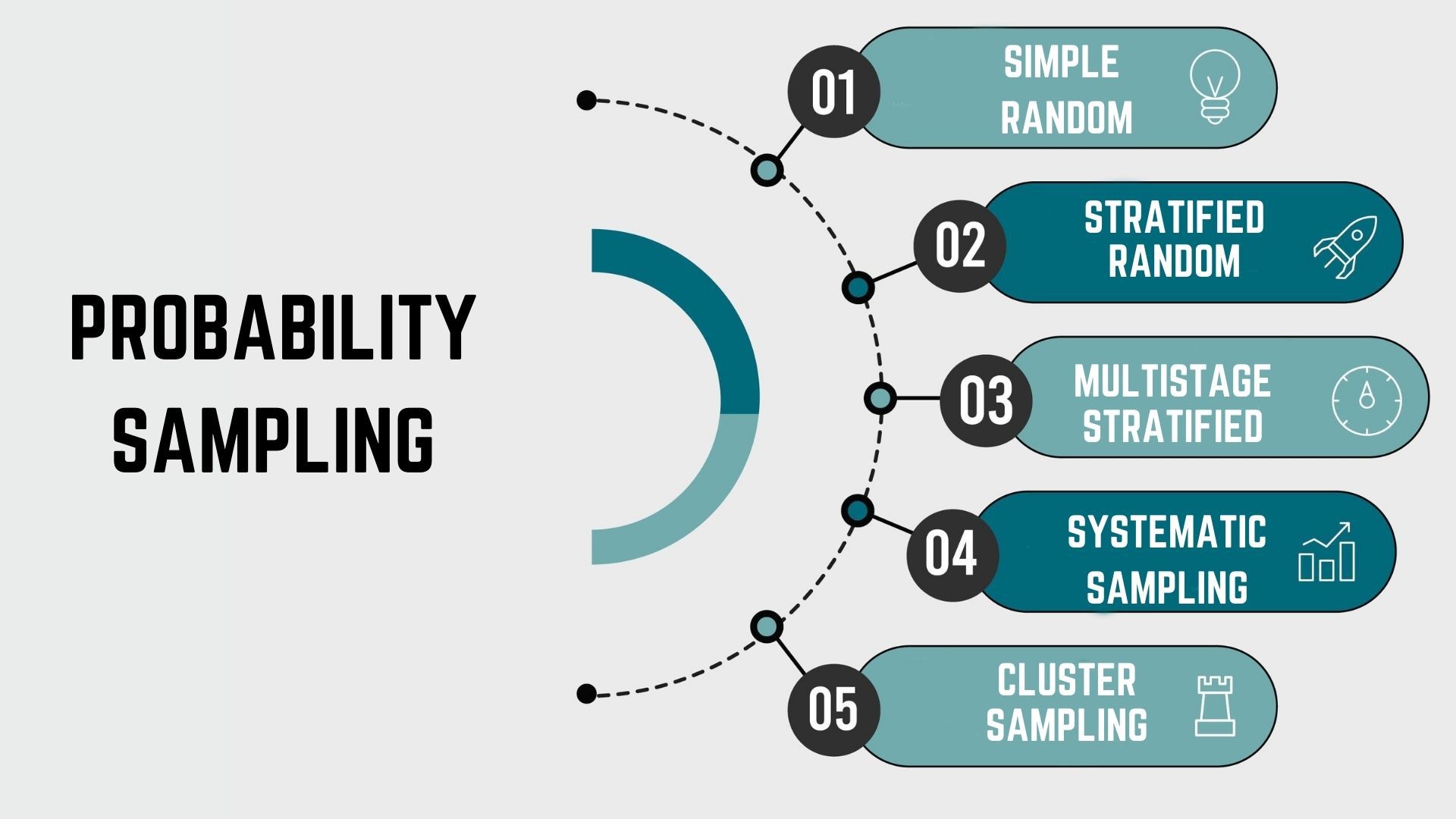 The sample should be representative of the population. This type of sampling tells you for sure if the sample is or not. You can also give a number to the amount of certainty you have the sample being a representative. This number is called significance.

There are different ways of probability sampling. They are:

These can be explained as under:

In this type of sampling, every member of the population, or every constituent of the data, has an equal chance of being selected to be the sample. This is a simple method and doesn’t require a lot of knowledge before the collection of samples.

Even though the method is simple, it has a lot of drawbacks. It is not cost-efficient. It is also not that precise as the sample might not represent the data or population. The samples may have a lot of errors. Thus, this makes this method rather inefficient.

This type of sampling decreases the sampling cost and has a higher accuracy rate than simple random sampling.

It, too, has its disadvantages. The homogeneity traits or the type of data used to construct strata and eventually collect samples may be flawed. This flaw may end up leading to collecting an incorrect sample.

The region that has to be sampled is divided into different strata that are randomly selected for sampling. This is the first stage. The next stage includes collecting random samples from the already chosen random strata.

This is different from stratified sampling in the way that a sample is collected from each stratum in the latter as opposed to the former. This is also more efficient and has a lower cost.

Due to randomness in the sampling, it has a lower precision rate. Also, the clustering in this sampling is stronger, even more than simple random sampling.

In this type of sampling, the sample is taken from a regularized pattern that can be rectilinear, triangular, or hexagonal; this ensures coverage of all the subsets. The sample selected can be the nth number of each pattern. Thus, this gives systematic coverage.

This also is very efficient, both in terms of sampling and cost. But the downside to this is that it has a lower precision rate.

Cluster sampling is done when you have to sample a widespread population. It is done by dividing the population into clusters. Then two or three from the entire clusters are selected.

The sampling is done from the selected two or three clusters. This is cost-efficient but too lacking in high precision. 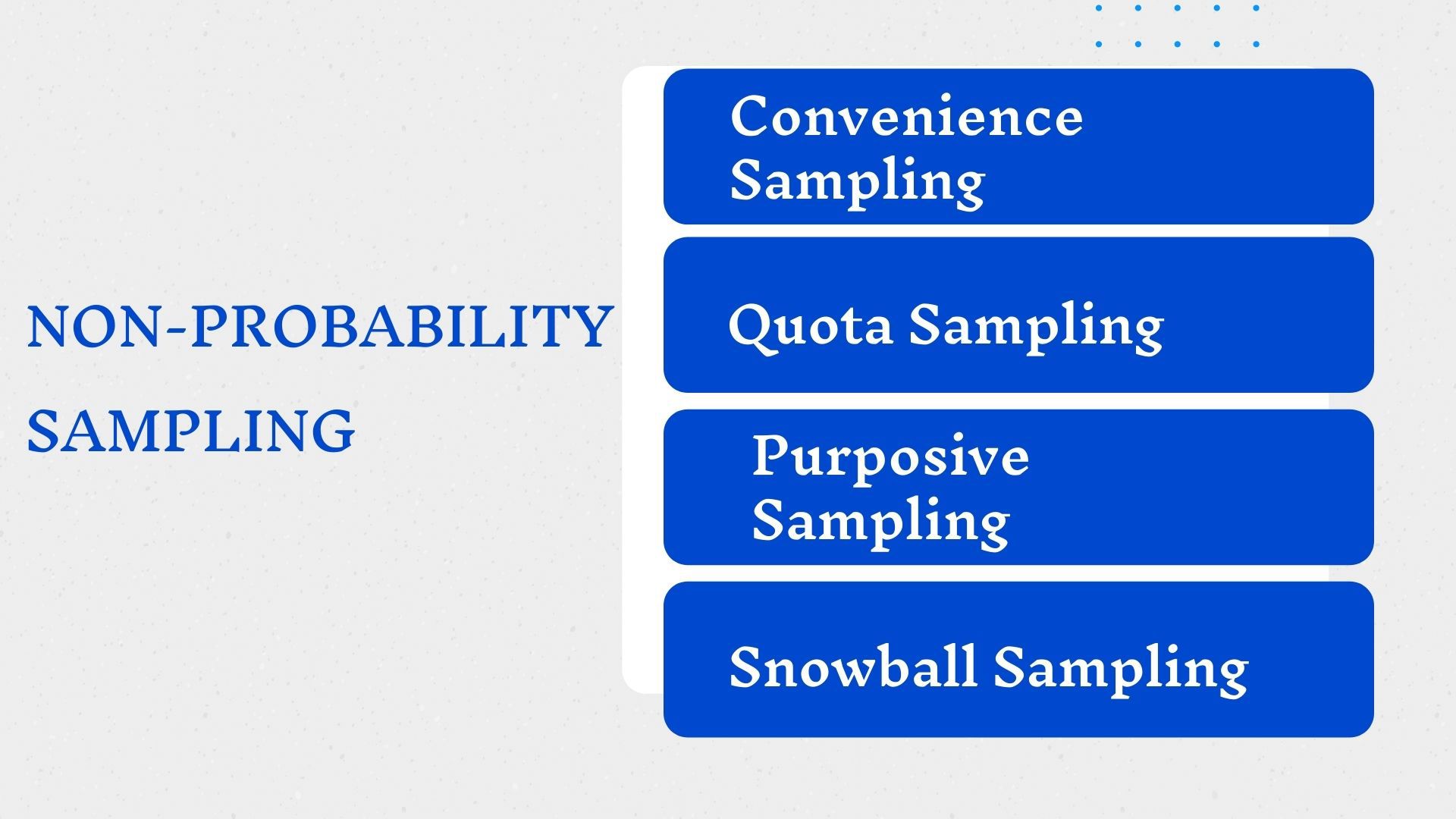 In this sampling method, you can’t know the probability of the part of the sample with confidence.

The conclusions drawn from this probability cannot be for the whole population for sure. This type of sampling method is developed to address specific problems that can’t be solved using random sampling otherwise.

The different types of non-probability sampling are:

This type of sampling selects a sample based on easy accessibility. The samples are collected as to how convenient they are, hence the name convenience sampling. These samples are easy to collect and organize. But the possibility that the sample is representative of the population is not very high.

In this type of sampling, only the people who meet the required criteria are approached. It is checked if they meet the other specified criteria. If so, they select the sample. An example where this is done is when doing market research, which is age-specific.

Steps Involved in the Process

Different steps that take the sample process move ahead are

After the target population is defined, the next step lets the researchers decide on the sampling frame that includes the list of elements from which the sample can be easily drawn.

In the third step of sampling and sample design, a sample unit is specified, a basic unit for incorporating a single element or a group of elements of the population that are supposed to be sampled.

4. Selection of the Sampling Method

The fourth step revolves around the selection of different sample units. This method is influenced by different goals, such as business research, time constraints, availability of financial resources, and the nature of the problem that is supposed to be investigated.

In this step of sampling and sample design, the sample size is determined. Different types of classifying techniques come into play while deciding the sample size.

This step plays a crucial role in specifying and deciding the implementation of the research process. You will find out the outlines for the modus operandi of the sampling plan.

In this final step of sampling and sample design, the final selection of sample elements occurs. Here, interviewers should stick to those rules crucial for the actual and smooth implementation of the research.

Every method of sampling has its upsides and downsides.

While conducting the research, you have to decide which method is the most suitable for your research.

No one method is exact and is not ideal. Thus, there should be left measures for minute errors or omissions.

The ultimate goal is to select a sample that can be as close as possible to becoming a representative.

Still, having any doubts about what is sampling and sample design? Feel free to ask us in the comment section below.