SUV Market in India:  More than 11 new entrants are clobbering the Indian SUV market! SIAM (Society of Indian Auto Manufacturers) report says that the SUV market grew at a rate of 32% in the last FY. The analysis further says that there was a huge decline in the sales of entry car segment like Alto, Eon, i10, Nano etc because of SUV sales.

The rising consumerism in Indian market has made the consumer to have various options which has increased the customer bargaining power too. Indian players like Mahindra & Mahindra, Tata have head on head competition between Mahindra Scorpio & Tata Safari. Among the foreign players who invaded Indian automobile industry only Toyota had a major impact in the SUV segment with hot selling models like Innova & Fortuner. 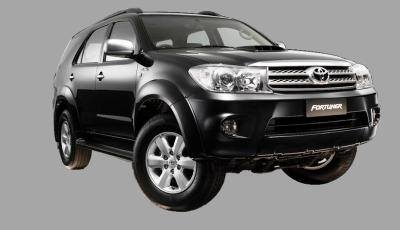 Other players like Hyundai Motors India limited, Maruti Suzuki, Ford, Mitsubishi have a less market share. Mahindra dominates the suv segment ever since the launch of its Scorpio from Mahindra which has its own success stories. Mahindra XUV 500 which is developed indigenously by M&M was a runaway success because of the faith that the customers had in Scorpio. The lists of SUVs in Indian market are listed below.

The year 2011-12 will be the year of SUVs for India; all global auto players have their eye on emerging Indian market. The average age of a customer buying an SUV has reduced from 39 to 31 years, which shows the market potential of Indian SUV market is flourishing due to increase in buying power of younger generations. This year in the Auto expo held in New Delhi there were more than 1500 participants from 23 countries. New entrants in the Indian SUV are Mercedes ML class, Force one,  Ssangyong Korando, Mahindra W201, Safari Merlin, Touareg, Audi Q3, Renault koleos etc.

The increasing craze for SUV market has stalled the growth of Indian small car segment.  While there are many SUVs entering Indian market; the expectations towards Ford Eco sport has already increased as it uses the same platform of Fiesta. Fiesta engine is known for its better performance & mileage efficiency. On the other side M&M after invading the Indian markets has started invading US markets; it exported more than 11000 SUVs and aiming to be the biggest exporter in this segment. The much awaited XUV 500 is a runaway success with 25,000 bookings received since its launch. SIAM report says that India has the highest proportion of the population who are below 35 years in that 70% are potential buyers; which can be only a myth in any other part of the globe!

The factors favouring the growth of SUV segment:

On the negative side the increase of SUVs will cause a considerable damage to the environment with their fuel consumption and carbon emission. The diesel price which is given in a subsidised price is consumed in a larger quantity by SUVs which is owned by high end of the society. The increase of SUVs market will again increase diesel consumption and resulting fuel price hike. Hence SUV manufacturers face a great challenge ahead in producing ECO friendly vehicle better performance without compromising the “mileage”; which is the most key deciding factor in Indian context.