Toshiba corporation is a multinational corporation which is located in Tokyo, Japan. It has presence in multiple industries and has operations in many different nations. The company was founded in 1938 as Tokyo Shibaura Electric K.K. It actually gained the name “Toshiba Corporation” in 1977.

Toshiba is organized into four business groups – Digital products, Electronic devices, Home appliances, Social infrastructure. One of the key achievement of Toshiba is that it is the seventh largest semi conductor makers in the world.

Here is the SWOT analysis of Toshiba 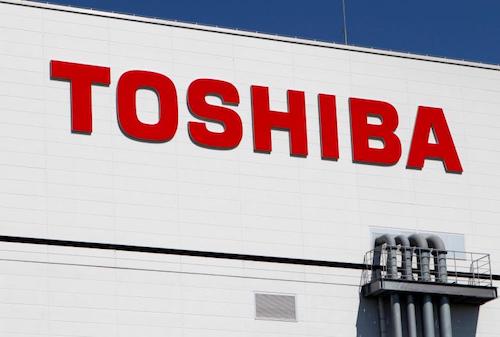 Strengths in the SWOT analysis of Toshiba

Multiple industry presence – A common saying heard is that you should not put all your eggs in one basket. It seems that the saying was meant for Toshiba. Toshiba is present in a wide range of industries including consumer durables, telecommunications, information technology, power systems, appliances and many others.

Wide portfolio – Naturally, because it is present in such a wide variety of industries, Toshiba has a wide portfolio of products. It has a tremendous range of products in consumer durables which majorly includes televisions. In IT, it is know for its semiconductor and storage services. Besides products, Toshiba has a strong presence in services including IT and telecom services.

R&D and Patents – Being a technology leader, Toshiba has a lot of patents. It spends tremendously in R&D and hence comes out regularly with breakthrough technology. It has above 300 billion dollar investment in R&D and it has more then 2500 patents in the US, its home ground.

Brand valuation and rankings – The brand is valued at a whopping 9.4 billion dollars making it a strong brand in the market. In terms of brand ranking, it is ranked 727 across all global brands as per Forbes.

Weaknesses in the SWOT analysis of Toshiba

Non Green machines – One of the major factors against Toshiba is that the US, which is the major economy where Toshiba is present, itself thinks that Toshiba does not manufacture green machines. In fact, its energy concentration is very less and it is ranked in the bottom part where energy conservation is concerned. This is a serious concern for Toshiba where its Management objectives is concerned because the world itself is moving towards green energy.

Debt issues – Toshiba is facing a huge write down in its nuclear division due to which the firm is supposedly in a big debt. This has resulted in many financial agencies downgrading the firms financial ranking. Several financial ranking firms in Japan as well as US have downgraded Toshiba corporation due to these debt issues.

Growth is stagnant – If you look at the graph below, you can see that the overall revenue growth of the brand has been almost stagnating since the last few years. The income flow is constant and there is no consistent growth year on year. If it has grown one year, it has fallen the other year. 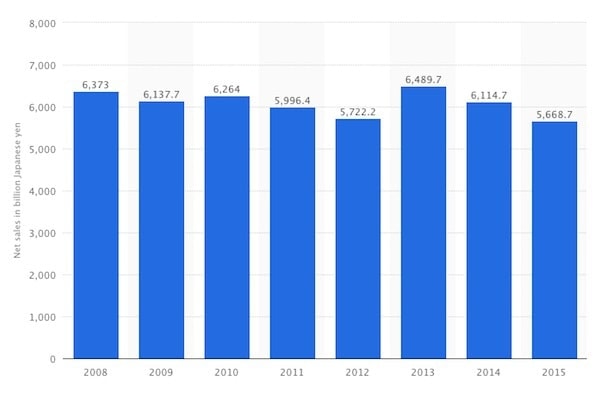 Only certain segments performing – A reason for the poor performance of Toshiba and the reason that there is not much growth in the company is also because only a few segments are performing very well for Toshiba. Power, Consumer durables and semiconductors are their star performers. But other segments are very weak.

Opportunities in the SWOT analysis of Toshiba

Expand in medical equipments – The healthcare segment is a segment where constant breakthrough and innovation is required. As Toshiba’s major competitive advantage is its technology, hence it can easily expand its presence in this sector where technological innovations have a lot of value. Major technology inclined companies like GE and Siemens have a fantastic presence in the medical equipments sector.

Spend more on brand building – A major flaw in the marketing strategy of Toshiba is that although it is advertising and investing in marketing communications, the communications are not frequent enough and hence this is adversely affecting the brand equity. Toshiba needs to spend a lot more on its branding efforts to see the results.

Provide breakthrough products in semi conductors – Semi conductors and storage medias are the future business and the support function for many other businesses such as laptops, servers, machines and others. Hence, constant R&D in this segment can help the firm in maintaining its market share.

Threats in the SWOT analysis of Toshiba

Change in Technology – Obviously, a major challenge to any company which is technology oriented is a change in technology. Toshiba has to realign itself with every new change in technology brought about in the market. Many of these technological changes have been brought by Toshiba itself. But it needs to be dynamic in nature and has to keep adapting at all times. This can be a threat to the company itself when the external or internal business environment restricts the firm from innovating.

Debt – A major factor which can affect the growth of the firm internally is its debt structure and the risk it has taken especially in its nuclear industry presence. It has had to write off several assets and funds in the nuclear arm which is hurting the overall company very badly. The company is not able to walk off this debt due to sub par performance and the debt is dragging the company down. Toshiba needs to come out of debt by implementing a unique strategy else it will face a major threat in its existence.

Economy – The Economy is one of the major external factors for any business and if it goes into a downturn, it might affect all companies equally. However, the affect on Toshiba might be worse because Toshiba is already under debt. Hence a bad economy is a major threat to Toshiba.