Most often we hear that price is a major factor which can directly affect the demand of a product. With this in mind, the following article is going to describe the concept of elasticity of demand in general, the factors that are influencing it, as well as its calculation and interpretation.

Price elasticity of demand represents the relationship between change in quantity demanded of a particular product and the change in its price. 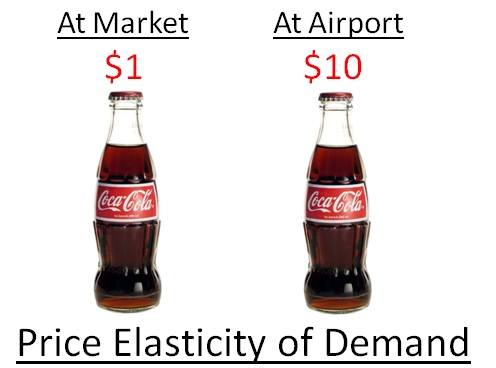 For example – you are faced with this concept when you go to the airport, and you want to buy a bottle of water. You are shocked, as you pay five times more than the price of the bottle. This can be explained by the fact that at that respective moment and place, the numbers of substitutes are quite low or nonexistent and the degree of necessity can be considered quite high.

After calculating the price elasticity of demand, we can obtain different values, each one having different meanings. It is important to know how to make the interpretations of the respective values.

If the value that results by computing the price elasticity of demand equals 0, it means that the demand is perfectly inelastic.  This means there will be no change in quantity demand, and demand is independent of price or other variables.

If the value that results is between 0 and 1, than the price elasticity is inelastic. A product is inelastic if a large change in price is accompanied by a small amount of change in the quantity demanded.

If the value that results equals 1, the demand is considered to be elastic, which means quantity demanded might be directly proportional to the price change.

And lastly, if the value is above 1, then the demand is perfectly elastic, where a small change in price is accompanied by a large change in the quantity demanded.

In order to make it easier for understanding, let’s take a short example.  If the quantity demanded for a product increases by 10% in response to a 5% decrease in price, the price elasticity of demand would be 2, which would be considered to be perfectly elastic.

There are several factors that can influence a change in the quantity demanded as a response to a change in price, such as:

Firms/organizations can use this concept in order to predict a change in price on the total revenue, price volatility following changes in supply, taxes passed to consumers or part of a policy of price discrimination.