JetBlue is an American low-cost airline and is headquartered in New York City. It is the sixth largest airline of the United States. The main base of the airline is at John F. Kennedy International Airport. The airline is not a part of any of the three airline alliances but has codeshare agreements with 21 airlines.

As of May 2018, JetBlue serves 102 destinations in U.S, Mexico, Central America and South America and the Caribbean. In 2017, it was awarded as the best airline for North American Travel by business Traveler USA.

Strengths in the SWOT analysis of JetBlue 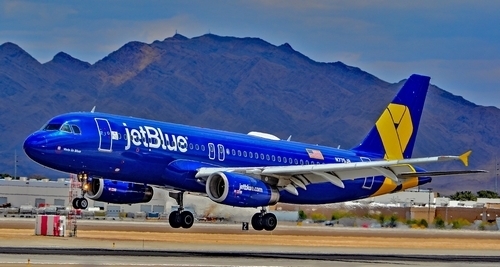 Storytelling and brand identity are major factors in establishing a loyal fan consumer base. “Passion, Safety, Caring, Integrity, and Fun” are at the core of everything the brand does and JetBlue makes sure that all this is engraved in the story of the brand.

They have an Instagram blog called “Out Of The Blue” which shares stunning photos and stories of the work environment, destinations, food etc. and uses languages that is casual and funny to express their stories. Through these strategies, JetBlue creates a brand persona that is easy going, fun and creates excitement for the stress-free ride.

It is a low-cost airline but it makes sure that the brand is not represented as cheap. They provide services like free luggage, free change fees, and cancellation. It also provides in-flight entertainment with complimentary beverages and snacks and says that they love to spoil their customers.

They provide free movies, Sirius XM radio variety of in-flight entertainment. Before hurricane Irma hit, most of the airline companies hiked the prices to take advantage of the situation but JetBlue provided flights as cheap as $99 to help people evacuate from the hurricane thus customer satisfaction is at the core of everything they do.

The founder of JetBlue, David Neeleman, signed a memorandum of purchasing 60 A220-300 aircraft. This will help JetBlue server thinner routes without compromising on cost especially on the long haul flights. The company has added 5 new routes including Fort Lauderdale-Phoenix and Boston-Rochester.

JetBlue said it will be adding more than two dozen flights on existing routes to Boston, Orlando, New York etc. They have sufficient aircraft to improve their network performances and build their key markets.

Weaknesses in the SWOT analysis of JetBlue

JetBlue serves 101 cities and all of them is in the Caribbean and the North American destinations.  If the company decides to fly to Europe it would be a big leap for the 18-year-old carrier. The airline claims that longer and international routes would increase to the complexity, cost and additional challenges to the current route of the airlines.

2) The high cost of operation

There various items pressuring the airlines to cost in 2017, were capacity reductions, marketing costs and maintenance costs. The company’s repair and maintenance cost increased by 17% in 2015 and 15% in 2016. The pilots are pushing the market to increase their pay rates and the company faces a tough time in achieving its cost targets.

Opportunities in the SWOT analysis of JetBlue 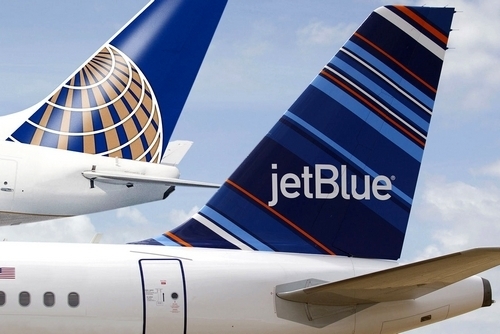 In recent advertisements, the airline seems to be pointing towards Europe with the text “New possibilities with the A321LR option”. The CEO believes that a lot of opportunities exists for JetBlue in the northern rim of Latin and Central America. JetBlue should continue expansion in Fort Lauderdale with new routes to Ecuador, St. Maarten and Phoenix. JetBlue said it will increase flights to more than two dozen of its most profitable and popular destinations with a strong focus on growth in Fort Lauderdale and Boston

The company is open to expansion in the European sky and has started building capacity for the same. The company said that by 2019, it will have the capability to schedule flights to Europe and other East Coast focused cities if they want to. They will have the choice to convert A321 neo orders into long-range A321-LR. The company said it has the agreement with Airbus to bring 30 more A321 aircraft to its fleet over the span of 7 years.  Another 15 A321neo aircraft will start to arrive in 2020. A new long-range variant of A321 could also be fly across the Atlantic for the very first time.

Threats in the SWOT analysis of JetBlue

The company recently announced that it is raising fees and fares due to the increasing fuel bill which has reached sky high and the demand for travel is also strong. In August 2018, JetBlue became the first airline to hike the baggage fees and the new charges matched that of the competitors. According to JetBlue the fuel bill in the quarter was up 37% over the year to $2.32 per gallon from $1.69.

At the cost of $6.67 billion, the company has been aggressively purchasing new aircraft with 127 new aircraft and 10 engines on order through 2023. The company already has 203 aircraft in its current fleet and these orders mean that it will be ramping up its fleet numbers by 60%.

These orders are made assuming JetBlue will have substantial growth over the next 8 years. If it fails to do so, JetBlue will be left with the huge number of extra airplanes that could be sold or be given for lease or parked just to incur the cost of the parking fees and maintenance fees. These future deliveries could pose a solvency risk for the airline if the growth is slow.