The second oldest brand in the brand portfolio of the World famous beverage company Coca-Cola introduced in 1940. The brand is also the second largest brand of Coca-Cola outside the US. The Fruity taste of Fanta helped the brand in becoming world famous so much so that it is consumed more than 130 million times every day Fanta Orange flavor worldwide.

The brand first started its journey from Germany when during World War II it becomes hard for the company to import Coca-Cola Syrup into Nazi Germany due to trade Embargo.

Segmentation, targeting, positioning in the Marketing strategy of Fanta–

In the Non-alcoholic beverage segment, Fanta uses value-based positioning strategy and position itself as a brand offering various alternatives in terms of flavors.

Competitive advantage in the Marketing strategy of Fanta–

1. Established Parent Company: Fanta is flagship Non-Cola brand of Coca-Cola, the company has the competitive edge over its competitors when it comes to Operations, Cost control, Brand portfolio, Channel marketing, Collaborative customer relationship and penetration in the market.

2.  Cost control- The diversified product portfolio of the brand, Outsourcing operations & economies of scale helped in optimizing its operational cost and increased profitability.

3. Strong Portfolio- The brand have more than 90 flavors worldwide while the formula of particular variant varies across the different countries like the Orange variant flavor differs in Canada/ American/ German or European counterpart.

4. Collaborative Customer Relationship- The Glo-cal strategy followed by the brand Fanta helps in creating shared value through participative marketing and tailoring its extensive portfolio of products and packages to the local needs.

BCG Matrix in the Marketing strategy of Fanta- 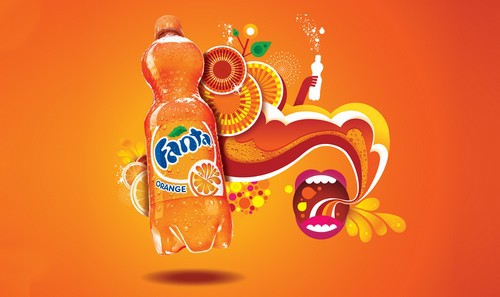 The Non –Cola, and Non- an Alcoholic brand is available in the favors such as Orange, Mango, Grape, Pineapple, Strawberry, Peach, and Berry.

In most of the market, it operates the Orange and Mango flavor are sold widely and is, therefore, stars in BCG matrix while the other flavors being new offerings by the brand and are the question mark in the BC matrix.

Distribution strategy in the Marketing strategy of Fanta–

The Brand operates along with the distribution channel system of the parent company Coca-Cola. It uses sales and distribution models depending on market, geographic conditions and the customer’s profile:

(1) The pre-sale system separates the sales and delivery functions  which helps in  loading mix of different products that retailers have previously ordered, it helps in  increasing sales and distribution efficiency and controlling cost,

(3) A hybrid distribution system-carrying products for both immediate sale and product previously ordered.

(4) The telemarketing system and

The brand makes its different flavors available in more than 180 countries globally.

Brand equity in the Marketing strategy of Fanta–

The parent company has been closely associated with the Hollywood film industry and has been part of many movies since its inceptions. Fanta is known for its colorful advertising highlighting the colorful life of the young generation.

Ogilvy being the ad agency for the brand helped the brand in repositioning the lost image of the brand with colorful branding and new tagline Wanta Fanta!

Competitive analysis in the Marketing strategy of Fanta-

The Non-Cola segment have the large number of competitors competing in the market based on factors such as Glo-cal strategy, low price, easy availability even in the remotest location and encasing.

Big Giants like Fanta, Pepsi, Tropicana etc are using branding and sponsoring events as a means to increase visibility and differentiate itself from the peer brands.

Some of the competitors of Fanta are Mirinda, Tango, Sumol, Slice, Tropicana etc.

Market analysis in the Marketing strategy of Fanta-

Developing nations are driving the sales of the companies in the Non-cola market with the increase in migration and cosmopolitan culture.

The industry co-exists with the supplementary products such as water; tea/coffee, soft drinks, so chances of customer switching to these is very high.

Customer analysis in the Marketing strategy of Fanta–

Availability of the brand in different SKU’s (stock keeping units) has helped the brand in penetrating to different strata of the society. However, the majority of customers of the brand are from the age group of 10-35 years who are young and have the sound health condition and wants to quickly quench with Fanta. The survey by global research firm Mintel reveals that that Millennials in the age group 27–37 years have higher energy drink consumption—61% in 2015 from 55% in 2014 while 74 % of the old age consumers are concerned about the health issues of the cold drinks.