According to this definition, job enlargement means combining of different activities and the addition is done to existing job profile so that the new job profile that is created is enlarged and covers both old as well as new work profile.

The term addition of responsibilities may mean that the responsibilities and duties may be new, or they might have been performed by an existing employee. The important fact to note here is that the duties are “at the same job level.”

This means that employees who are working in a factory may be given to handling additional assembly line as a part of job enlargement, but they are not given a duty to manage a corporate office since it would not be on the same level. It can also be termed as the horizontal expansion of the job enlargement and the related activities.

Not only are the duties and responsibilities increased in job enlargement, but also the scope of these duties is also heightened in specific jobs. The primary motive of implementing job enlargement is to increase the flexibility of the staff by carrying out this horizontal restructuring.

This also helps the employees to come over the job boredom and reduce the monotony that they may have developed on the job over a period of time. Job enlargement may be carried out for a temporary period of time, in case of absence or unavailability of the employee.

Usually, when female employees go on pregnancy leave or medical leave, job enlargement is common in many organizations. The critical factor, to be taken into consideration while putting an employee for job enlargement is the capacity of the employee to bear the stress and load of additional duties.

Job enlargement is also used as a motivational procedure to reduce the attrition rate of the employees. The concept of job enlargement is under the in opposition with the principles of division of labor and work specialization because in this principles the work is usually divided into smaller units and is performed repetitively by the assigned employee so that he or she becomes specialized in the particular task.

The other motive behind implementing job enlargement is that the employee will be exposed to a wide range of duties and responsibilities. Job enlargement may be carried out in cases where the company requires to promote a particular candidate.

It can be considered as sort of pre-promotion training. Apart from that reduction in monotony and increase flexibility in work, the other advantage of job enlargement is that no excellent skills are required to carry on additional responsibility.

The other objective of incorporating the process of job enlargement is to make the job position more fulfilling and interesting for the employee and also to make the employee more responsible for the organization.

Employers prefer Job enlargement so that employees have something new to look forward to at their work desks and also because it reduces distractions of the employees.

A distracted employee may look for the troubles and problems in the job and find ways to quit or may even encourage others to do so, but an engaged employee is nothing but productive for the organization.

However, in certain cases, since that is an addition of new responsibilities, the scope of existing responsibilities may be reduced. It is important to note that although the employee is given the additional job responsibility, he may or may not get paid for the work.

In some cases, the organization will check pure dedication of the employee towards his work, and in other cases, it may be an official role change altogether, wherein the employee will be paid appropriately for the Job enlargement duties.

Few examples of job enlargement would be as follows 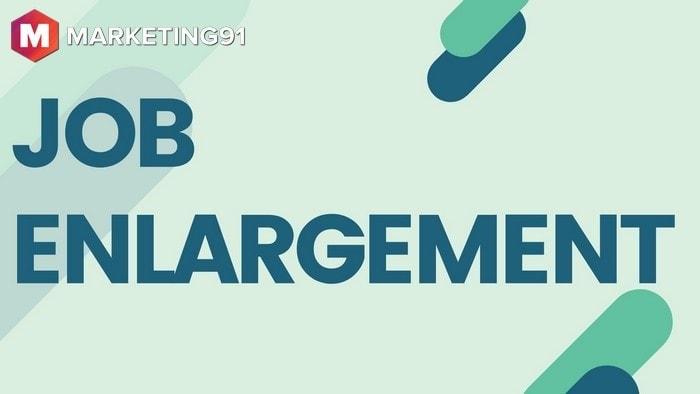 A person in a bank who looks after the accounts receivable department is given a job enlargement and now is supposed to handle cash receivables as well as account maintenance and statement generation for customers.

Another example would be a salesperson who is responsible for generating only sales is given by job enlargement and now is supposed to collect the payment as well as deliver the order cause its a part of his job enlargement.

In this case, the employee who was earlier managing sales for an area which included five cities may now manage sales, payment collection as well as order delivery for only three cities since it may not be humanly possible to cater the customers of such a huge magnitude.

Many Government offices are seen giving a mixture of Job enlargement and Job Rotation to employees.

In an office, a product manager who is due for promotion may be given a task to manage Advertising budget of other division as a process of Job enlargement. This will expose him to the additional responsibility, new division, and their working pattern and will also make his promotion ready base on job enlargement.

A temporary absence of an employee also calls for job enlargement in a team. This is also common in case of cost-cutting, wherein the company is reluctant to make new hiring are likely to affect job enlargement.

Thank you for reading our article about Job Enlargement.

Leave us a comment and letting us know if this job analysis article has helped you understand enrichment management.