Economies of scale is a concept which leads to reduction of costs when a company expands its production. The cost is reduced because fixed costs go down. These fixed costs might include rent, manpower, or other production factors. When a company grows in size, it might negotiate well to reduce its variable cost as well.

Have you ever thought of how milk companies can sell small sachets of milk at so low prices across the world? Or how can Ikea sell flat-pack furniture at what seems impossibly low prices? Or how can a large retailer like Walmart maintain so low prices? The answer lies in the concept of economies of scale. The above mentioned companies are just some examples of many of the companies performing and using the concept of economies of scale. Other big players on the market, well-known for practicing it are Procter & Gamble, Exxon Mobile Corporation, United Parcel Service, Fedex, Intel Corporation and others. 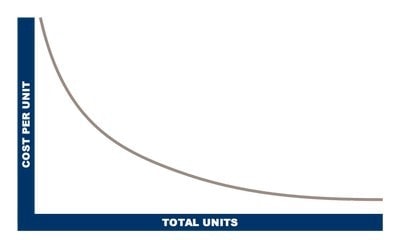 The concept itself of “economies of scale” is quite easy to explain and understand and it involves the cost advantage that occurs when we increase production of a product. The idea is based on the inverse relationship between the quantity produced and per unit fixed costs. Therefore, the greater the quantity produced, the lower the fixed costs as these costs are shared over a larger number of products. At the same time, many variable costs can be reduced due to operational efficiencies and synergies.

Lets understand Economies of scale with an example.

Also Read  What Is Gross Domestic Product Or GDP and Role Of GDP In Economy?

Another perspective, would divide the economies of scale in four categories such as:

Let’s take the first category, the technical economies of scale. To produce energy, the energy company from Tanzania, Tanesco, had to invest in a huge network of energy poles stretching through the country. The fixed cost of this investment was very high. However, since they distribute energy to more than 3 millions of households, it brings the average cost down.

For the second category mentioned above, i.e specialization of the work force, the most suitable example would be in the production of cars or different kinds of electronic equipment. When we have to build a car, there are a number of employees involved in the process. If for each of the processes we split the employees as they would specialize in the production of certain parts of the car, therefore, there will be an increased level of efficiency in the production process and a decrease in the need of more employees. Same ways, automation of industries increases the fixed cost, but by increasing production, decreases the per unit cost.

Financial economies of scale might be explained through a different example. If we were to consider that when a consultancy company is working with a biscuit company to sell them on a foreign market, it is important to see how many packages of biscuits can fit into a container. This is also known as the container principle, meaning that, as more products can fit into a container, lesses costs are going to be involved in distribution.

The marketing example of economies of scale is bulk buying. When people go to hypermarkets to buy in bulk, it will be cheaper than buying from smaller shops in smaller quantities.

The economies of scale is not only a cost advantage but can be considered as an entry barrier for new competitors, as they will have to sacrifice profitability levels to stay on the market. By focusing on this concept, companies can manage to improve logistics and price advantages while attracting more customers.