Many, many people around the globe deliver lectures or write articles and books about leadership every day. Leadership is a very complicated term to be precisely defined by putting it into words. Many forms of leadership have been witnessed in the past.

Some exceptional leaders have manifested themselves and have gone on to create history in their own spheres. Each of them has had a different style of leadership, different level of intimacy with their teams and stark different personalities and beliefs.

Later in 1985, Bernard M Bass furthered this concept by mentioning the various qualities that a transformational leader should have.

A successful transformational leader should be able to motivate others, set clear goals, set high standards of performance and expectations, be fair and honest to his work, appreciate his team for the work they put in, encourage the employees to look at the greater good of the company and not only their self interests and make people challenge themselves to be able to perform to the best of their potential.

Transformational leadership is a style of leadership where the leader, along with his/her team, is able to identify the challenges ahead, resources available and build a long term vision for the team and is constantly engaging and involving the employees to perform to the best of their abilities and grow professionally and personally in the process.

The most important aspect of transformational leadership

it is that the leader is not only bothered about his performance or deliverables but also consciously tries to guide his subordinates and uses his experience and expertise to give a good professional career to the subordinates. 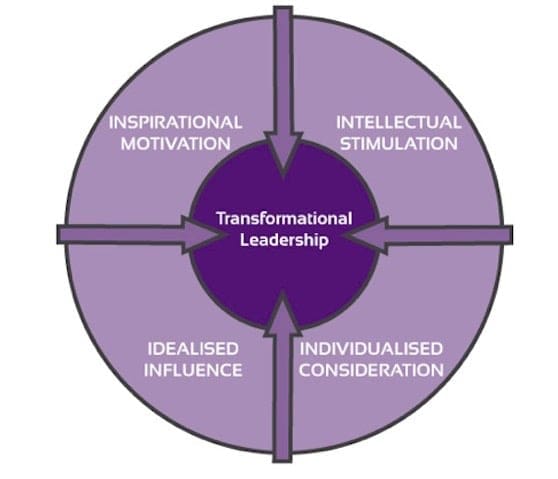 1) Inspiring people – A transformational leader should inspire people to move in the right direction. Even when the leader is not present himself, his people should be motivated and inspired in their professional and personal life to follow the leader and to do the right things.

2) Intellectual simulation – A mark of a transformational leader is that he stimulates his own subordinates intellectually. He is always demanding the best from them as a result of which, even the subordinates think of ways to make their leader happy. He listens to his subordinates, appreciates their excellent feedbacks and might even admonish them for improper thinking. But in the end, this leader motivates and challenges people intellectually.

3) Idealised influence – A transformational leader has a huge influence on people who follow him. He might be an ideal boss or an Ideal leader for them. This requires that he behaves impeccably at all times, thinks beyond the call of duty and delivers his best. But at the same time, he needs to do things which are unthought of before.

4) Individualised consideration – Besides managing all of the above, the true transformational leader is one who considers each individual separately and treats each person as a different human being. He understands their issues and knows how to read people as well as motivate them. At the same time, such a leader might use the right people at the right time thereby giving better overall results. Such actions give confidence to the subordinates under him.

Here is a video by Marketing91 on Transformational Leadership.

Examples of Transformational Leadership And Leaders

Let us now look at a few examples of transformational leadership in the world and see how leaders functioned.

Steve Jobs – Steve Jobs has to mandatorily be one of the names in the most iconic transformational leaders the world has ever seen. His passion for perfection, simplicity and sophistication drove the company and he made sure that it got engraved into every employee who worked at Apple. He constantly challenged his employees to think beyond what has already been done and made them create products that the world did not even know it needed.

Martin Luther King Jr. – Martin Luther King Jr’s struggle to end racism in America has inspired many across the globe. His passion for justice and his methods of protesting gathered worldwide support. He encouraged the masses to join the civil rights movement in America and ensured that the movement was not just about him or others who were prominent, but about humanity.

Leaderships Vision That Inspires Other Leaders

Mahatma Gandhi – Another popular example in the list of transformational leaders in the world. Mahatma Gandhi gave the Indian freedom movement a sense of direction and purpose. He was able to make it a truly mass movement that till then existed in fragmented interests and limited to either extreme elite participation or participation of the extreme poor. By preaching his theory of non violence, Gandhi was able to bring in each citizen of India into the freedom struggle and make every single person’s contribution count.

Barack Obama – The first black President in the history of the United States of America, Barack Obama was an extremely popular and a humane leader. He was respected all over the world and his sense of humanity and compassion made it possible for world peace to be maintained to a great extent. Obama encouraged his staff to be open and ideate without any boundaries. His compassion and sense of understanding towards his employees made him approachable and thus increased the efficiency of his entire administration to a great extent.

Nelson Mandela – South Africa’s first black President, Nelson Mandela’s dream of destroying apartheid was widely shared and he was successful to a large extent. His charismatic Transformational leadership style and compassion for humanity made him a great and affectionate leader. He connected with the masses and worked towards their upliftment in the society and envisioned a better future for blacks across the world.