The hospitality industry is on the path of development and growth as the sector has seen an unprecedented rise in recent years. The mentality of people is changing. There was a time when people used to travel only once in a year or two for recreational purposes, but now they are frequent travelers.

They do not want to waste even a single weekend sitting at home. Even if they do not have much time, individuals still want to go out and enjoy life.

Remember, hotels are not just a place to stay but an important part of your tour and travel. Excellent services, innovative products, and comfortable stay are necessities that a customer expects from a hotel. The best ones are always on the look-out to better themselves and offer premium comfort and pure luxury.

Most of the hotels are located at prime settings that offer scenic settings to the customers. The surroundings act like a balm, and the amenities can easily take away your worries.

Luxurious settings are an important part of expensive hotels. It is not a lifestyle for everyone because most of us cannot afford such a life of decadence, but those who can enjoy it once in a while. 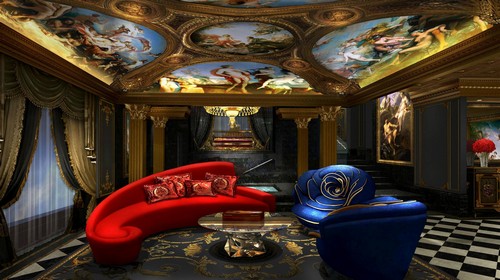 The 13 is a luxurious hotel in Macau, China by Louis XIII Holdings Limited. It includes two hundred villas, restaurants, and bars. The Villa de Stephen is the icing on the cake in terms of luxury and opulence. It is spread over 30,000 square feet and is the largest villa at the 13. With an estimated billing of 100,000 dollars, it is known as one of the most expensive hotels in the world.

Every room at Villa de Stephen has a private elevator lobby. The interior of the villa was inspired by Baroque hence you will be able to see an abundance of ornamented sculptures and furniture. The villa has its private fleet of Rolls Royce for its distinguished guests. The most expensive hotel in the world has taken extravagance to new levels. 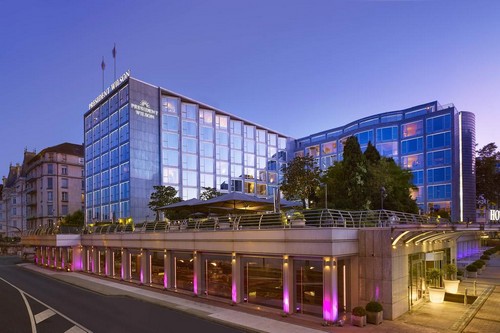 Hotel President Wilson is one of the most expensive hotels in the world at an estimated 65,000 dollar stay per night. It is located in the beautiful city of Geneva in Switzerland and has been named after President Wilson of the United States to honor him for his role in League of Nations.

It opened its doors to customers in the year 1962 and since then has gained immense popularity in the hospitality sector because of its high standards and impeccable services.

The best part of Hotel President Wilson is its Royal Penthouse suite that is available at the cost of 80,000 dollars per night. One way to relieve your dream of staying in opulent surroundings is through this room. Several famous personalities have stayed at Hotel President Wilson over the years like President Bill Clinton, actor Michael Douglas, Singers Michael Jackson, and Rihanna and Bill Gates. 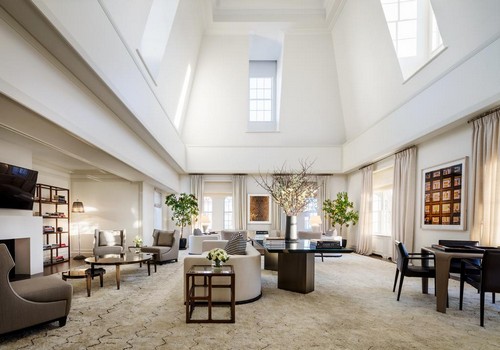 The Mark Hotel is located in New York, the United States. Originally it was styled in Renaissance Revival style, but in the year 2009, the interiors were redesigned by Jacques Grange, the French Designer. It includes fifty-six suites and one hundred rooms along with restaurants, bars, and other amenities.

Also Read  List of 10 Most Expensive Apps in the World

The Mark Penthouse in The Mark Hotel, New York, is a luxury suite that offers comfort, affluence, and best services.  It is billed at an estimated 75,000 dollars and is one of the most expensive hotels in the world. At 1,000 square-meter and two-stories, the suite boasts of five bedrooms and six bathrooms along with a terrace. 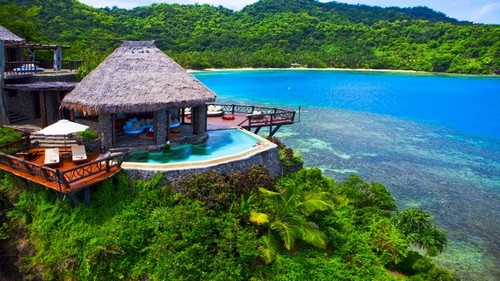 Laucala Island Resort as the name suggests is at the Laucala Island in Fiji. It charges nearly 40,000 dollars per night and is one of the most expensive hotels in the world. The private island is a natural paradise and a tourist favorite as it offers unique scenic beauties to its customers.

Hilltop Villa at 1.5 acres is a small resort within the Laucala Island Resort and is available at 64,000 dollars per night, making it one of the most expensive hotels stays in the world.

It is located at the highest peak and offers the best view of the island besides private boat, Jet Ski, panorama pool with Jacuzzi and waterfall, private chef, chauffeur services, fantastic dining, and nursery. 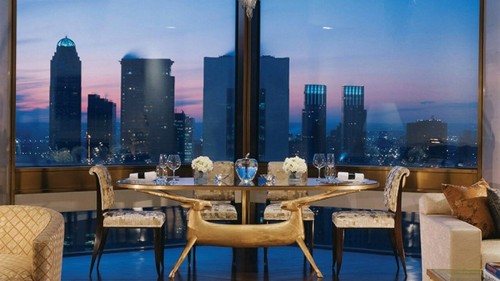 Four Seasons Hotel is located in New York in the United States and started in the year 1989, is considered luxury at its best. The estimated price per night is 35,000 dollars, and this makes it one of the most expensive hotels in the world.

Artworks from international artists, panoramic views and impeachable services have made it a name to reckon with. Its services include fitness facilities, beauty spa,  24*7 customer desk, laundry services, travel facilities, etc.

At an estimated 50,000 dollars per night stay, Ty Warner Penthouse suite, named after the owner,  is one of the most expensive ones in the world. It is at the uppermost 52nd floor and boasts of imposing views, expensive furniture, private elevator and unlimited usage of Rolls Royce.

The Grand Riad is one of the palatial suites of The Royal Mansour, Marrakech and is steeped in elegance and royal luxury. It was built on the orders of Mohammed VI Moroccan king and boasts of Moroccan style.

The three-storied, eighteen hundred square-feet villas have Moorish architecture, own cinema room, private gym, Moroccan Hammam and a pool on the terrace. At a billing price of 44,000 dollars per night accommodation, it is one of the most expensive hotels in the world. 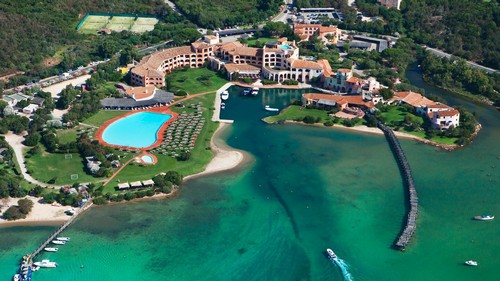 Hotel Cala di Volpe has gained the attention of tourists and travelers from the entire world because of its beautiful settings and exceptional scenic beauty. It is a 5-star hotel that boasts of several amenities like free Wi-Fi, bar, fitness center, room service, spa, free parking, restaurant, and pool.  Hotel Cala di Volpe is Italian elegance at its best.

Hotel Cala di Volpe is a part of Marriott Hotel and is based near Sardinia in Italy. The Presidential Suite at 41,000 dollars per night accommodation makes it one of the most expensive hotels in the world.

It has four bathrooms, three bedrooms, a steam room, a wine cellar, and a terrace. Both interiors and exteriors reflect the warmth of Italian nature, making the stay at this hotel cozy and luxurious. 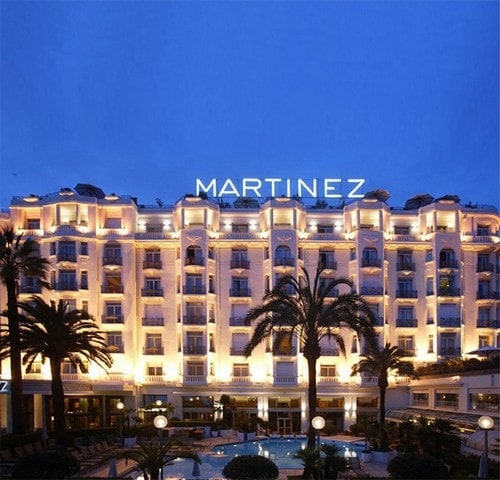 Grand Hyatt Cannes Hotel Martinez was opened in the year 1929 at Cannes in France by its owner and founder Emmanuel Michele Martinez. With four hundred and nine rooms and ninety-nine suites on seven floors, it is considered one of the most expensive hotels in the world.

Also Read  16 Most Expensive Shoes in the World

The Penthouse Suite in the Grand Hyatt Cannes Hotel Martinez is billed at an astonishing amount of 37,500 dollars per night and is one of the most expensive hotels in the world. It offers several additional benefits that are not for normal guests to make their stay more luxurious. 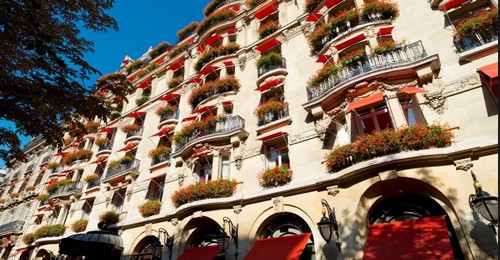 Hotel Plaza Athenee is located in Paris in France and is part of the Dorchester Collection group. It opened in the year 1911 and since then has grown from strength to strength as one of the exclusive, popular and most expensive hotels in the world.

Originally the hotel had a bar and five restaurants, but after renovations in the year 2014 several guest rooms, new buildings, ballroom, suites and event spaces were added to the main structure. The hotel boasts of French décor, French Regency furniture, and unique antique except for the seventh and eighth floor which have been done in art décor.

At estimated 30,000 dollars per night, Hotel Plaza Athenee is one of the most expensive hotels in the world. It is considered the best place for honeymoons and romantic gateways and the Royal Suite on the 5th floor has been specially created for this purpose. 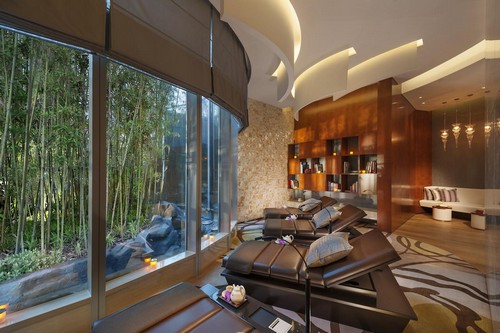 Mandarin Oriental is located at Pudong in China and offers some of the finest and luxurious suites to its customers. Executive apartments, suites, and sleek rooms along with club lounge, pool, spa, and multiple restaurants make the stay of its customers as comfortable and cozy as possible.

The Presidential Suite is considered magnificent and one of the best of the millennium. It offers a great view of Huangpu River along with wine cellar, rooftop garden, sauna bath, master bedroom, private gym, and a butler’s kitchen. At a billing price of 24,325 dollars, it is considered one of the most expensive hotels in the world. 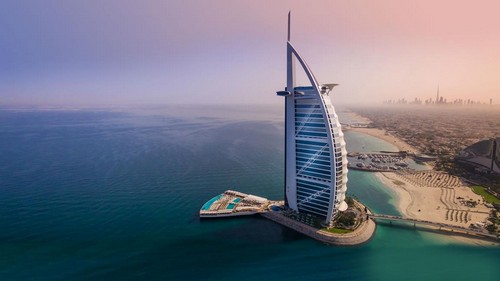 The Burj Al Arab is one of the tallest, most popular and luxurious hotels in the world. Located in Dubai, UAE, and opened in the year 1999, it stands on an artificial island that is connected by a private bridge to the mainland.

Also Read  The 12 Most Expensive Cities in the World

The hotel is shaped like a sail of a ship and is also known as the Pregnant Building. Its extra services include 24/7 on-call personal butlers and Rolls Royce fleet driven by Chauffeurs to cater to VIPs and royalties.

The hotel has a helipad of its own and has two hundred and two bedroom suites to offer its visitors. The royal suite at an estimated 24,000 dollars price tag per night makes this hotel one of the most expensive hotels in the world. It is one of the best 5-star hotels, and the management has held several events to attract media and audience attention.

Tiger Woods teeing off in the year 2004 and Roger Federer and Andre Agassi playing tennis at its helipad in the year 2005 has helped the hotel in remaining in the limelight. 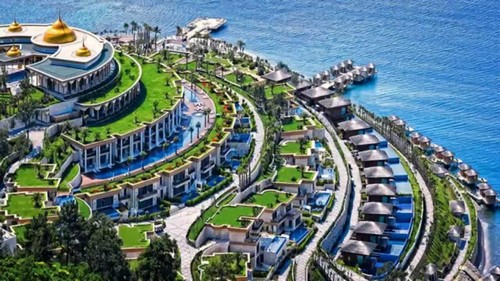 The Palace, Jumeirah Bodrum Palace is located in Bodrum and is very near to Torba Beach. This 5-star hotel offers one hundred and thirty-four fully air-conditioned rooms to its customers along with facilities like private balconies, internet access, private bathrooms, spa offering body treatments and massages, swimming pool, three restaurants for dining, 245-hour room service and business center with meeting and conference room.

The Palace, Jumeirah Bodrum Palace is especially known for its infrastructure, design and unique features. The Palace charges an estimated 22,413 dollars per night for accommodations making it one of the most expensive hotels in the world. 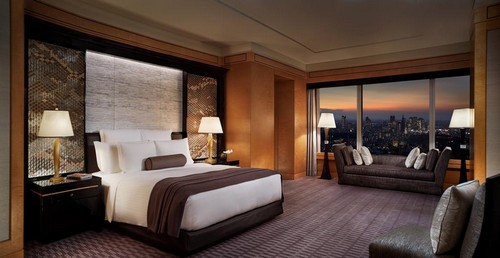 The Ritz Carlton is located in Tokyo, Japan and has taken luxurious living to other heights with ultimate pampering. The luxury amenities are as impressive as the view from every bedroom. Club-level accommodations, seven restaurants, a whole flour for wellness and health and meeting places have been created, keeping in mind family vacations, romantic gateways, and business travelers.

A stay in the most expensive hotel in the world offers you a tranquil sanctuary and relaxing experience. The beautiful bedrooms are a hit with honeymoon couples. Ritz Carlton Tokyo provides excellent ambiance and marvelous services to attract its customers.

If you are a frequent traveler, then you will understand the importance of a good and expensive hotel so that your stay can become comfortable. The most important aspect of traveling either for recreational or business purpose is that you can relax during your free time and this is what a good hotel offers.

Excellent services are an integral part of hotels, and the most popular ones are always on the look-out to offer additional products and services to attract further clients. If you have an unlimited budget, then book premium lodging in the most expensive hotels in the world.