The term accountability represents the sense of answering to the ultimate consequences. When there is a delegation of authority it is assumed that the employee is empowered to perform a particular task for his senior but the senior would still take the ownership of the final result. The accountability flows bottom up as a subordinate is usually liable to the superior for a particular task. When the person is accountable he or she is supposed to explain the outcomes regarding his decisions are actions or even omissions. When individuals another group who is ready to take the blame if the work is not done properly then it is termed as they are being accountable for their work. 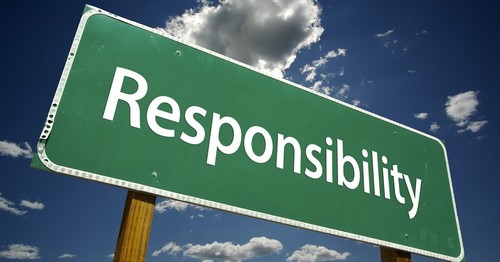 Responsibility is nothing but an obligation to complete is assigned task. It is considered as the duty of a person to complete the delegated work properly within time. It is seen usually as a senior-subordinate relationship. In this relationship, the junior is bound to perform the task that is dedicated to him by the senior. Discuss the flow of responsibility is top down since the subordinate is responsible for his or her senior. When a person or a group is in the complete charge of something and ensures that the work is completed in the proper way it is called responsibility.

Example: In an office, it is usually the responsibility of an office boy to ensure that the supplies are in the office room. So, the office boy is considered a responsible person to make the supplies available. If the supplies are not available on time, then the same office boy is accountable or answerable for his actions and he is expected to take the ownership of the same. People from another department with question him and he has to answer which makes his accountable or answerable for the work.

In terms of business, it can be seen that while managers are accountable for the action of their team, they are not responsible for the consequences or the actions of their team. Similarly, the management is accountable for every action of the organization, but the responsible person may be someone else. This is where compliance plays an important role. Every organization will have a predefined set of compliance and code of conduct and the employees of the organization are expected to adhere to the same. If an individual contributor of the organization will perform something which violates the code of conduct, then he will be responsible for the same. For example, person A was caught bribing a key official to pass his Sales Order. Person A reports to Person B who is the boss. In this incidence, Person A was caught bribing an official which was against the code of conduct. Thus, Person A will be held responsible for his actions but Person B who is his boss will be accountable for the same since it is expected of the boss to supervise the actions of his subordinates. Thus, accountability and responsibility differentiate themselves.

The key differences between accountability and responsibility are highlighted as follows :

Also Read  9 Barriers to Planning -Strategies to Identify and Overcome

After seeing the difference is it is clear that accountability is the one in which the person is answerable for the actions or decisions made by Him or her. Responsibilities nothing but when a person is expected to be reliable and dependable in order to complete the task that is designated to him. Accountability is not only what we do but also what we don’t do for which we are held accountable while responsibility is the obligation to perform the assigned functions or tasks. Thus to be better at the workplace, it is essential that one understands the differences between responsibilities and accountability and act accordingly.